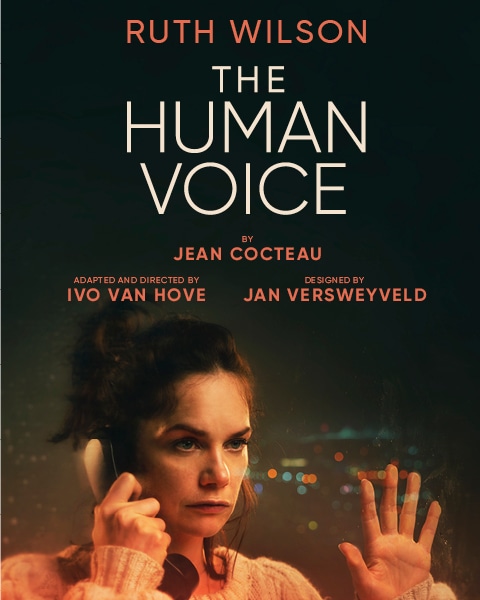 I’ll have to preface this review by mentioning that there were technical difficulties at the beginning of the performance I saw. This play is scheduled to only be 70 minutes long, so sitting in the auditorium for over half an hour while the technical issues were being fixed didn’t set the best pace for an enjoyable show and may have tainted my experience a bit.
The Human Voice is a monologue centred around the desperate heartbreak of a woman who speaks to her partner for the last time before he comes and picks up the last of his belongings. In this staging Ruth Wilson spent most of the play behind a large glass panel, creating a strong boundary between her and the audience, and also giving a voyeuristic air to the show, like we are looking in through a window, observing someone in their lowest emotional state without being seen ourselves.

The play starts very slowly, with a lot of shouting and wrong connections, which is a bit odd as the woman does have a smartphone that she randomly plays music on between phone calls, but the calls happen on a landline that seems to have other people speaking at random times, and quite a few wrong connections. This mechanic seems very contrived and outdated, irritating the audience more than adding any kind of depth to the experience.

There are a few other strange choices throughout the monologue, like a scene where the woman not just hugs, but deeply sniffs and kisses a pair of leather shoes that her ex-lover used to wear. And another moment where she crumples against the wall to freeze in place while a Radiohead song plays in its entirety and fades out before she even moves a muscle. Rather than bringing emotional depth, there’s an air of contrivance and artificial drama to these scenes, making the play seem a lot more drawn out and tedious than it needed to be.
Throughout the show, Wilson switches from talking into the phone to talking to herself and back again, going from calm and collected to a desperate mess through the excruciating pain of losing a loved one, at one time rambling on madly, at another simply gathering herself up and trying to put on a brave face.

Overall, the play feels very dated, overly dramatised, and slightly misogynistic (**SPOILER WARNING** especially the ending, where Wilson puts on a beautiful dress and high heels only to fling herself off the balcony in desperate heartache and the knowledge that surely she can not live on without this man)

The Human Voice felt way longer than it needed to be, and I was glad to leave the theatre when the show ended.