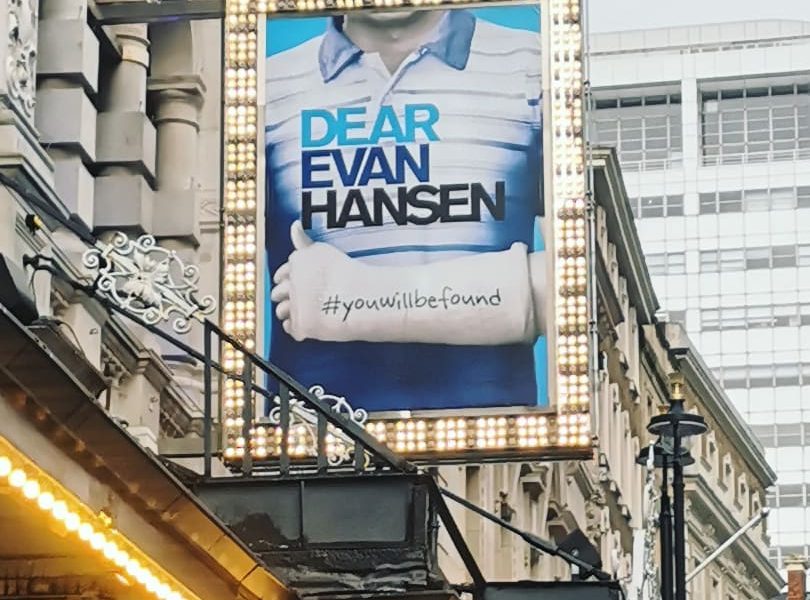 I’ve been wanting to see Dear Evan Hansen for a while, as I’ve heard from other people that they loved the show and found it inspirational. But having now seen it, I have to say I am very confused that this is a hit musical. Not because of the performances, those are great, but because of the story it tells. It’s all a bit disturbing, so big content warning for talk about suicide, and also spoilers for the show!

The basic premise is that Evan Hansen is an anxious teenager with an unspecified mental health diagnosis that has him taking medication and going to therapy. His therapist asks him to write letters to himself to help alleviate his anxiety, those letters of course start with Dear Evan Hansen. One day at school, his bully Connor steals one of his letters to ridicule him, but days later Evan finds out that Connor ended his life, and all that was found on his person was this letter, which the family assume was a suicide note written by Connor.

Instead of clearing up the misunderstanding, Evan abuses this development to gain favour with the family, as he feels abandoned by his own. He constructs a big web of lies with help from an acquaintance, portraying Connor as a friend and good person, when everyone else only knew him as a grumpy bully. He keeps taking the lies further and further and even starts a relationship with Connor’s sister. Eventually it collapses, but the consequences for Evan are very minor and not proportional to the harm he has done.

I really struggled to express how disturbing this entire musical is! Sure, it’s presented in this warm, accepting light that Evan suddenly finds a family who care for him. But they don’t! They are heartbroken about losing their son, who they failed as parents, and are grasping onto anything they can, so they grab on to the only thing they can, a young boy who claims their son wasn’t as broken and helpless as they thought he was. Which surely means that they can’t have failed him that badly. And WHY does Evan tell all these lies?

Because of the sister, who he has a crush on! And we’re supposed to regard that as a love story rather than the creepy manipulation that it is? No. Nope. Gross. I think the worst thing for me was the ending, where the memorial place is being described as this wonderful memory for the parents and sister, who go there all the time now. But the place only exists because of Evan’s lies. Which presents his actions as the right thing to do because it ended up bringing solace to those left behind, despite the fact that Connor had NOTHING to do with this memorial place, it was a completely made up story. Why would this bring a grieving family solace rather than rage?

Mainly, Connor’s sister is really done extremely dirty in this musical, bullied by her brother, manipulated by Evan, and eventually she has to hold her family together to grieve an imaginary boy who never existed but is still kind enough to tell Evan that her family meet at the memorial for picnics all the time. The whole thing is unbearable emotional abuse of this poor girl.

Evan faces no tangible consequences and is still presented as the hero-character, despite being awful throughout the entire show, to everyone in his life! Including his poor mother who tries so hard to support him any way she can. His neurodivergence is really used as an excuse and explanation here, which is another terrible message to send. He could have stopped his lies at any point in time! But he chose not to, that had nothing to do with his neurodivergence, and everything to do with him being an awful person who does not care about anyone else’s emotional wellbeing.

I also wondered about Connor, who is completely forgotten in the story, and repeatedly misrepresented by his parents and Evan, as someone he absolutely wasn’t. Only his sister holds on to who he really was for a minute, but is then also easily manipulated into thinking he was just hiding his true self when she is being completely gaslit by Evan about her abuse at Connor’s hands. Connor and his sister seem to be the biggest victims in this story, yet we’re supposed to empathise with Connor’s parents, and of course with Evan.

Can we also talk about how hard Evan’s mother tries to help him, even getting him to go to therapy despite barely being able to afford it, and yet she’s absolutely shit on by the show because she supposedly neglects her teenage son by working too much… There really isn’t anything positive I can find in the entire show, I’m so sorry, it’s just so problematic!

I’m not sure what the musical is trying to say, but if we examine the plot, Evan is an absolute dick who abuses other people’s trust for his own objectives, women are used as motivators for Evan instead of having their own agency, emotional abuse and gaslighting are shown as some sort of positive thing that helps people grieve. The story seems to say that suicide can bring the family of the departed closer together, which is a very harmful angle and almost glorifying of teen suicide.

I cannot recommend this one at all.