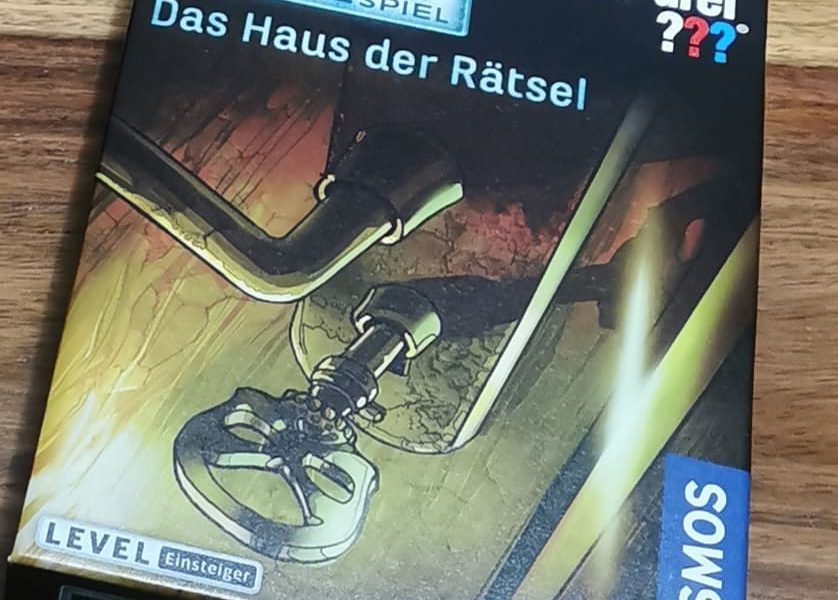 So this one is a bit odd to review in English, as I played the original German version. The House Of Riddles in its original form is branded with a very well known children’s series in Germany, the three investigators. Which I am a huge fan of as you can see by my tattoo. The story is tailored to the characters of the series and the world they live in, which I was very much looking forward to immersing myself in.

As with all Kosmos Exit games, this one comes with a decoder disk, a stack of riddle cards, a stack of answer cards, several 3-card stacks of help cards and a few “strange items”. The illustrations of this game match the illustration style of the series and the theme is so well put together. Keep in mind, this is a children’s series, so it’s definitely an easier game to figure out as the target age is about 10-13 years. So this is the difficulty we’re working with, it’s definitely not as complex as some of the other Exit games.

The basic premise is that you get locked into a house and need to find your way out by way of cleverly placed riddles. I’d say this is definitely suitable for a family or beginners who want to try out escape games. Or, of course, if you buy the German version, for anyone who is a fan of the three investigators! I loved playing this one, though I was through with it in just over half an hour. Brilliantly themed game!