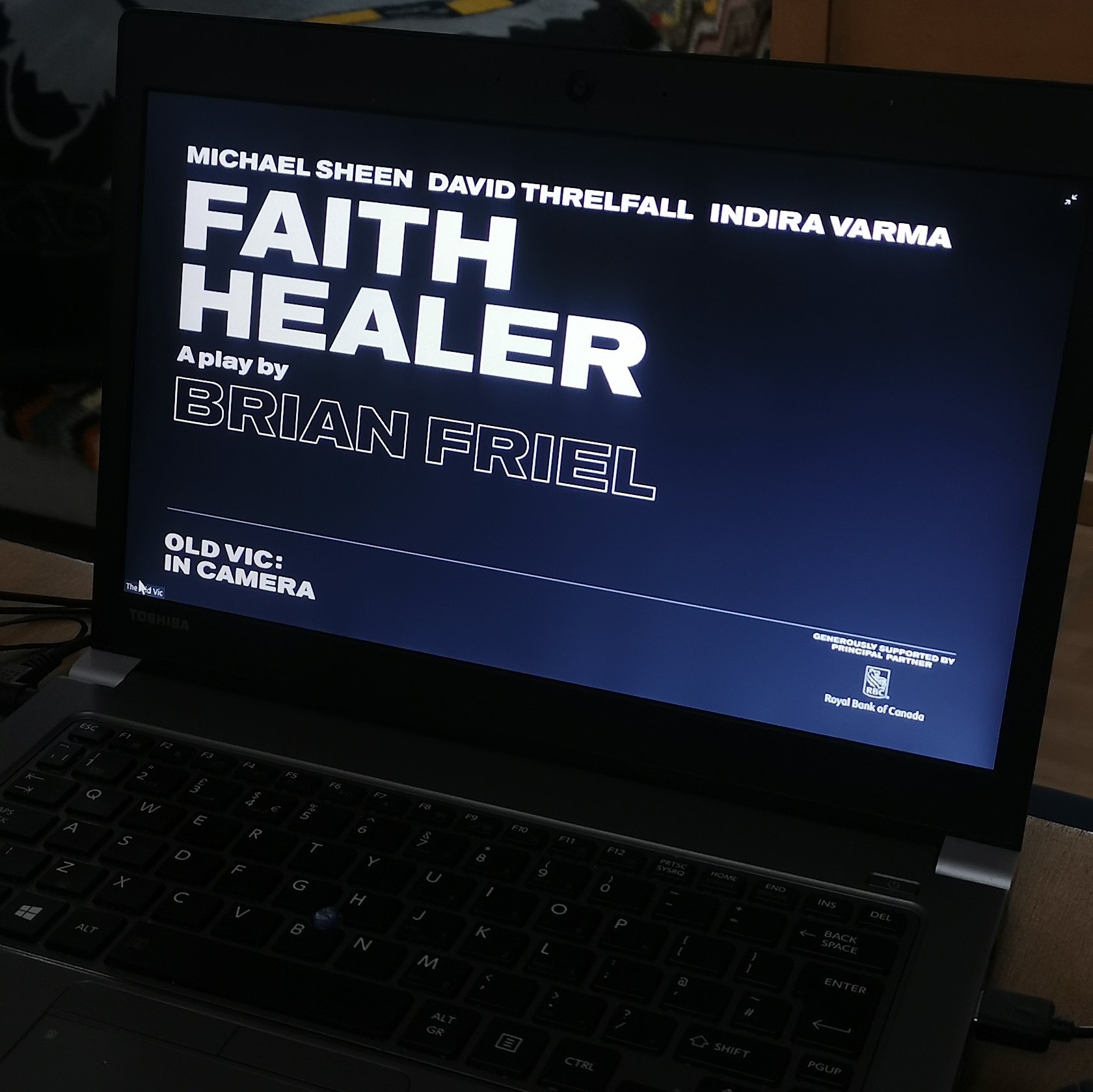 Another instalment of the live-streamed In Camera at the Old Vic ran last week, and of course I booked tickets to watch along again. I love the Old Vic live streams, it’s not quite live theatre, but it’s so close to it, and in the current times it’s so nice to be able to support the arts any way possible!

The third In Camera stream was Brian Friel’s Faith Healer, starring Michael Sheen, Indira Varma, and David Threlfall. This haunting play is broken up into the three characters of faith healer Francis Hardy, his wife Grace, and is manager Teddy, retelling the same story from their different memories and perspectives.

Faith Healer examines the power of faith and the lack of objective truth in human interactions. It all starts off with Francis telling the story of his life in the most grandiose terms, making himself out to be a fantastic snake oil salesman of sorts, drawing up pictures of the people closest to him and how his life went down hill in the end. This is followed by Grace, who has a very different perspective on everything that happened and sows seeds of doubt in the story told by her husband, letting him stand in a very different ligt told through her eyes. Third up is Teddy, with a much more measured view on both of them, and his own pride and a whole lot of character thrown in for good measure. Lastly, Francis Hardy gets the last word on the biggest mistake that ended his career, leaving the viewer to stand in the dark, processing everything they have heard.

Sheen convinces as the self-assured but deeply hurting faith healer, whose story highlights so many of the failings of an ego trying to rise above the average. Staring off into the distance, seemingly reminiscing about a specific moment, before he snaps back and puts on his con artist face again. The sparse lighting with a very dark auditorium and a harsh spotlight on the one actor on screen brought a dark air that suited the confusing and dark story very well.

Indira Varma’s performance as Grace specifically stuck with me, as she slowly unravelled in her retelling of her life and the things she went through. A harsh critique of Grace herself as well as the men she was surrounded with, but also a relatable perspective retold with a lot of emotion and depth. Teddy the manager, played by Threlfall, seemed a lot more calm and collected, almost disconnected from everything that happened, throwing in casual side-notes to raise his profile in a very comic and “fallen VIP” way, which was a much needed emotional break from the starkness of the two previous retellings.

Overall, I really enjoyed the production of Faith Healer for In Camera, from the casting to the direction it was thorough and very appealing for those of us who enjoy the darker side of entertainment. However, I have I do have a huge gripe with it. As a live-stream from the theatre itself, there was no way to pause the play, yet it was staged to run a full two and a half hours with no interval. As an avid theatre goer, this just isn’t what I am used to nor expect from a live production. Anything that runs over 90 minutes usually incorporates an interval, except for very few occasions.

I’m not quite sure why the Old Vic decided not to add an interval, this really detracted from my enjoyment of the show. This may seem silly, but I just didn’t expect it to run through for that long without any breaks and wasn’t prepared for it. Other than that, it was a beautifully haunting production of  a dark examination of human capacity for bending the truth.