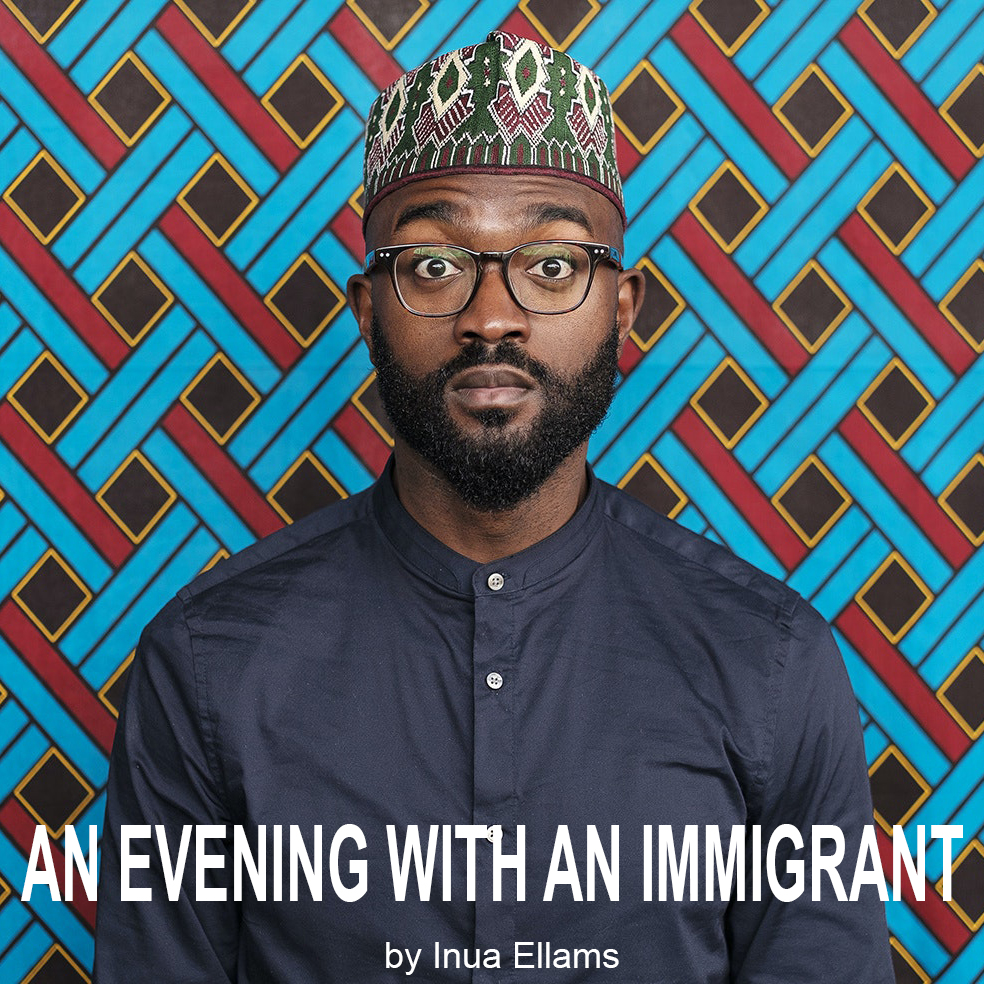 Last week I once again ventured to the socially distanced Bridge Theatre, this time to see the opening performance of An Evening With An Immigrant by Inua Ellams. I wasn’t sure what to expect, but was drawn in by the title. As an immigrant myself, though a very privileged one, I’m always interested in the conversation about immigration. Especially in a country with such a hostile environment towards this issue as the UK has become. Having recently watched a recording of the Barber Shop Chronicles during lockdown, I knew Ellams name and some of his work, but was absolutely not prepared for the intensity of this show.

Ellams tells his story on a stage tinged in blue and red light, beginning with his childhood in Nigeria, born to a Muslim father and Christian mother in a region that wasn’t tolerant of inter-faith marriages, raised in a very different society to the one he encountered later, when his family had to leave the country and immigrated to the UK when he was only 12 years old. Many years of struggles and alienation followed until they were finally welcomed to stay in London permanently. It is a story full of turns and unexpected forks in the road, told through beautiful poetry and with an admirable openness.

In troubled times like today, it is so important to hear stories like Ellams, to remind us all how difficult and often confusing lives of immigrants can be. As a European, my own immigration history was legally much easier and smoother, though I do have stories of the intolerance and xenophobia I have encountered in London in the past five years. Hearing Ellams experiences and perspectives was hard and emotional, I do admit it brought me to tears several times, but it is such an important story to tell. A story of alienation and lack of a sense of belonging, of families and friends torn apart, of legal hurdles that can destroy or save lives, of a country staunchly working on making immigration as difficult and the cultural landscape as inhospitable to “others” as possible, a cry for tolerance and understanding, for an end to all this madness and othering.

This staged performance felt more like a heartfelt chat with a good friend, an oportunity to discover a life lived with adversity and triumph, a path forged with passion and determination. A mix of poetry and storytelling, An Evening With An Immigrant is a beautiful piece that I urge everyone to see while they still can!

The show is running at the Bridge Theatre until the 15th of October and tickets are still available. Do yourself the favour and experience this story, broaden your undestanding of other people’s lived experiences and take a look at what this world looks like through someone else’s eyes, definitely the best and most impactful show I have seen this year to date!