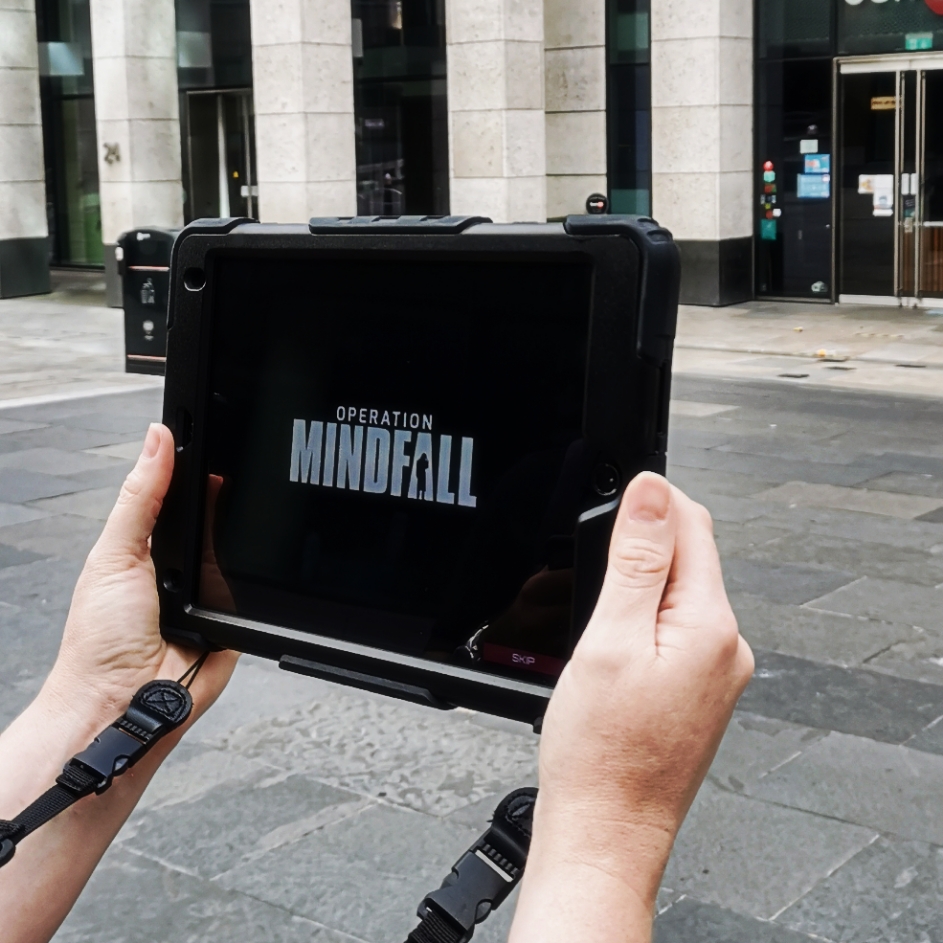 After having played AIM‘s Deja Brew and Spy Heroes escape rooms, I was invited by Love Popups London to try their new augmented reality outdoor experience in central London. We got to play the Operation Mindfall, which is a two hours outdoor adventure starting at the Monument.

The premise of this game is that we are secret agents for W.I.S.E., and are on the tracks of Spider Technologies, a company that developed a mind control serum and is trying to infect the world and seize control. Our mission is to uncover their secrets, obtain the antidote, and stop the hostile take over.

We gathered at the Monument and easily found our contact agent, who gave us a rucksack with all the spy gear we would need, as well as a tablet that would help us uncover secrets all over London. The tablet showed us a short introduction video to familiarise our group of secret agents with our mission and how to use the tech we were given to use. The interactive map first lead us towards the Tower of London, with lots of smaller puzzles and games to solve inbetween, using the sights in the area and AR technology.

For each little puzzle, there were items in the rucksack that helped us solve the clues and find the right answers. It was quite exciting to try to figure out what the clues meant, find the correct items, and then use them accordingly. All aided by the tablet, that showed us exactly where we needed to be and what to do. There is also a help function available for those who get stuck and need a hint to get back on track.

The wild scavenger hunt brought us across Tower Bridge, past the Southbank, and back to Monument eventually. Along the way, we solved so many puzzles, mixed an antidote, applied it to safe the world, and eventually hacked into Spider Tech headquarters to squash their evil plans. There was so much to do and see, all four of us felt very involved, and many different skills aided us in finding our way through the adventure.

I really loved the effort and skill that went into creating this fantastic game. It was so extensive and involved and exceedingly well planned out. Especially the spy pack with all the different items was really well done and so much fun to dig through to find what we’d need to use for the next puzzle. The route was also very well planned out and designed to take us to a good amount of tourist attractions and local hotspots.

This scavenger hunt was definitely the best planned out one I have played so far, and using some advanced technology along the way was so much fun. We spent a very entertaining two hours hunting around London to fulfill our mission. The variety and cleverness of the puzzles and clues made this a pleasure to try to solve!

My only two niggles would be that it was at times difficult to hear the sound on the tablet, especially in louder city environments, and that one of the plot points was a bit confusing and hampered by a large construction site. This has both been passed on to the company and should easily be solved for future players. Other than that it was a brilliant game.