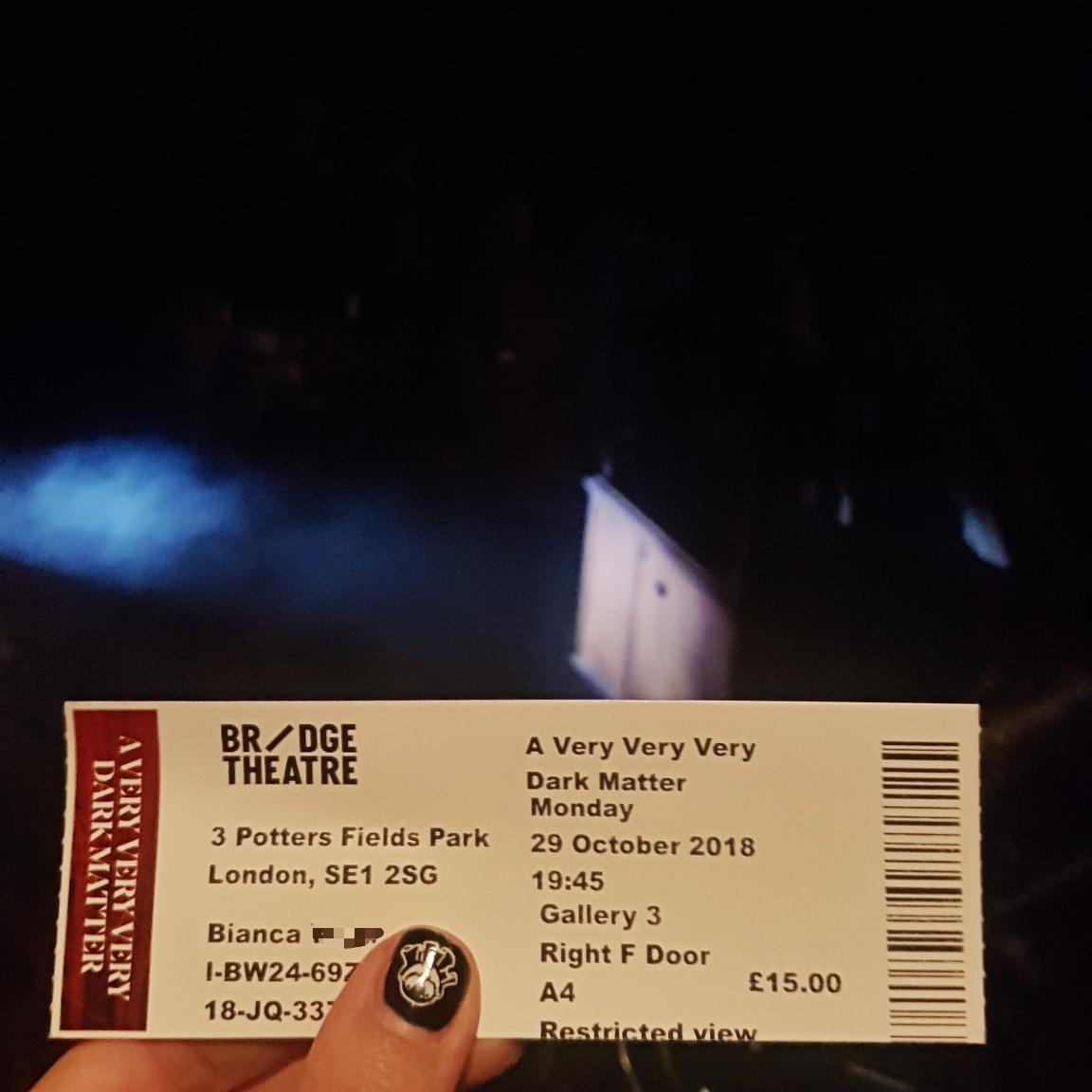 Being in lockdown due to the corona virus pandemic, I thought I’d use the time to work on my backlog of shows I never got around to review back when I actually saw them. I just don’t always have the time to write reviews right away and sometimes they just fall into an eternal backlog that I am now striving to work through! I actually viewed this production on 29 October 2018 and am writing the review with my theatre notes written during and after the performance.

I booked tickets to see A Very Very Very Dark Matter at the Bridge Theatre simply because of the creepy looking advertising campaign and the fact that I like to book spooky/dark/macabre events in the lead-up to Halloween.

A Very Very Very Dark Matter is the latest play by Martin McDonagh, and seems to really split opinions. Unsurprisingly, as it does indeed have a lot of very dark subject matters wrapped up in a play that doesn’t necessarily follow a cohesive plot. The stage design by Anna Fleischle is stunningly creepy with an eye for detail and magnificent set pieces, especially Hans Christian Andersen’s attic! That’s right, this play centers around Andersen, brilliantly played by Jim Broadbent, who is portrayed as a massively arrogant and socially inept man who is oblivious to his effect on other people. The main twist of this dark play is that he does not write his own stories, but is keeping a “black pygmy woman” in a cage in his attic who has the most creative mind. He simply takes her stories and changes the details he doesn’t like, like the little mermaid being black, before publishing them in his own name.

Marjory, the woman kept in a cage, is brilliant and headstrong, played beautifully by Johnetta Eula’Mae Ackles, and seems to want to make the best of her dire situation. But throughout the play the way she is utilized on stage feels very exploitative of the character as well as the actor herself. While the idea of putting a disabled person of colour in the centre of a play, negating white history by putting a revered writer’s works into her hands, seems interesting and thought provoking on the surface, I’m just not convinced this is done without racism and ableism in this case, which can of course be a vehicle of provocation in and of itself when done right. But in this case it doesn’t quite feel right, giving the play an inherently “wrong” feel.

While the play tries to dismantle Andersen as a real person with a real history, it also includes quite a few real-life events to blend into the absurd alternate reality feel. During Andersen’s infamous visit to Charles Dickens, in which he massively overstayed his welcome, we are presented with the fact that Dickens happens to have Marjory’s sister caged away, who is writing all of Dickens’ publications for him, a bizarre and intriguing storyline that is squished between underhanded insults and allusions to violence and morally very questionable habits. There are also numerous references to the Belgian colonial violence of the Congolese genocide, which is treated to a bit of an off-base time travel plotline that doesn’t really go anywhere and teeters on the edge of exploitation and education. This is underlined later with two blood drenched men entering the stage and graphically describing the atrocities of the genocide, but seemingly having no other connection to the plot of the play itself.

I can’t quite decide whether the exploitative, racist, and ableist tones in the play are meant to raise awareness through shock value, or are simply used as shock factors to make the audience uncomfortable and are thus exploitative themselves. I thought the story itself worked very well despite a few odd storylines thrown in (the time travel previously mentioned, as well as the blood drenched men) that feel like they need more work or need to be dropped entirely as they don’t cohesively fit into the main story following Hans Christian Andersen in this alternate reality in which he does not write his own stories. The whole insertion of the Congo massacres just feels flimsy and disjointed, though it does lead to supreme levels of discomfort in the audience.

As I personally like dark and macabre media and was looking for something suitably creepy and somewhat oddball, I actually thought this was a play with great potential. I can see why it splits opinions so severely and do believe it could use some more work to tighten up the story and drop the parts that seem so exploitatively out of place. I felt very uncomfortable and creeped out after watching A Very Very Very Dark Matter, which is a great result for a play that aims to do exactly that.