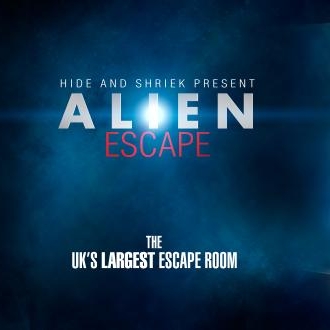 Being in lockdown due to the corona virus pandemic, I thought I’d use the time to work on my backlog of shows I never got around to review back when I actually saw them. I just don’t always have the time to write reviews right away and sometimes they just fall into an eternal backlog that I am now striving to work through! I actually played this escape room on 28 August 2016 and am writing the review with my notes from when I played the room.

Hide and Shriek is? was? I’m really not sure they still exist as none of their social media have had any updates in over two years, so I’m assuming they’ve quietly gone out of business? But back in 2016, they were an entertainment company in Southend-On-Sea, where they had a location in the Victoria Shopping Centre. They did different terrifying experiences and as a horror fan, I couldn’t resist when they offered an escape room.

In August 2016 they hosted an Alien themed escape room experience, so as an avid horror fan I grabbed a bunch of friends and headed over to Southend to see if they could manage to properly scare us with this gimmick. The brief for this room was that the crew of this spaceship had mysteriously disappeared, and we were sent to investigate what had happened to them, we knew nothing except that there was a distress call before communications went dark and have to follow the trail of hints and messages the crew left for us.

The escape room itself was quite impressive prop-wise, a very thoroughly constructed set of multiple rooms that we discovered one by one. The “crew” left notes and messages before disappearing, and these were the riddles and puzzles to solve. To the escape room’s credit, there were very few lock&combination puzzles to solve, so it did feel quite immersive. However, most of these riddles and clues were very obvious and easy. The company probably banked on the fact that people would be too panicked and frantic to really focus on brain gymnastics and as such simple and easy to solve puzzles would suffice.

I can totally follow that logic and back it up because even now almost four years after having played the room, several of the elements stand out clear as day in my memory! For example the ventilation shaft we had to climb through, when suddenly scratching and banging noises right next to us terrified us enough to stop movement for a good minute or so. Or the time we were in the server room and the alien tried to get in through the only door! There were several jump scares and the tension was super high, definitely one of the most immersively scary experiences I’ve played.

The simple structure of the puzzles and riddles did make it quite easy to breeze through, but it was scary enough to not want to linger anywhere for too long anyway. This company really knew how to scare people efficiently and we all loved the experience very much.