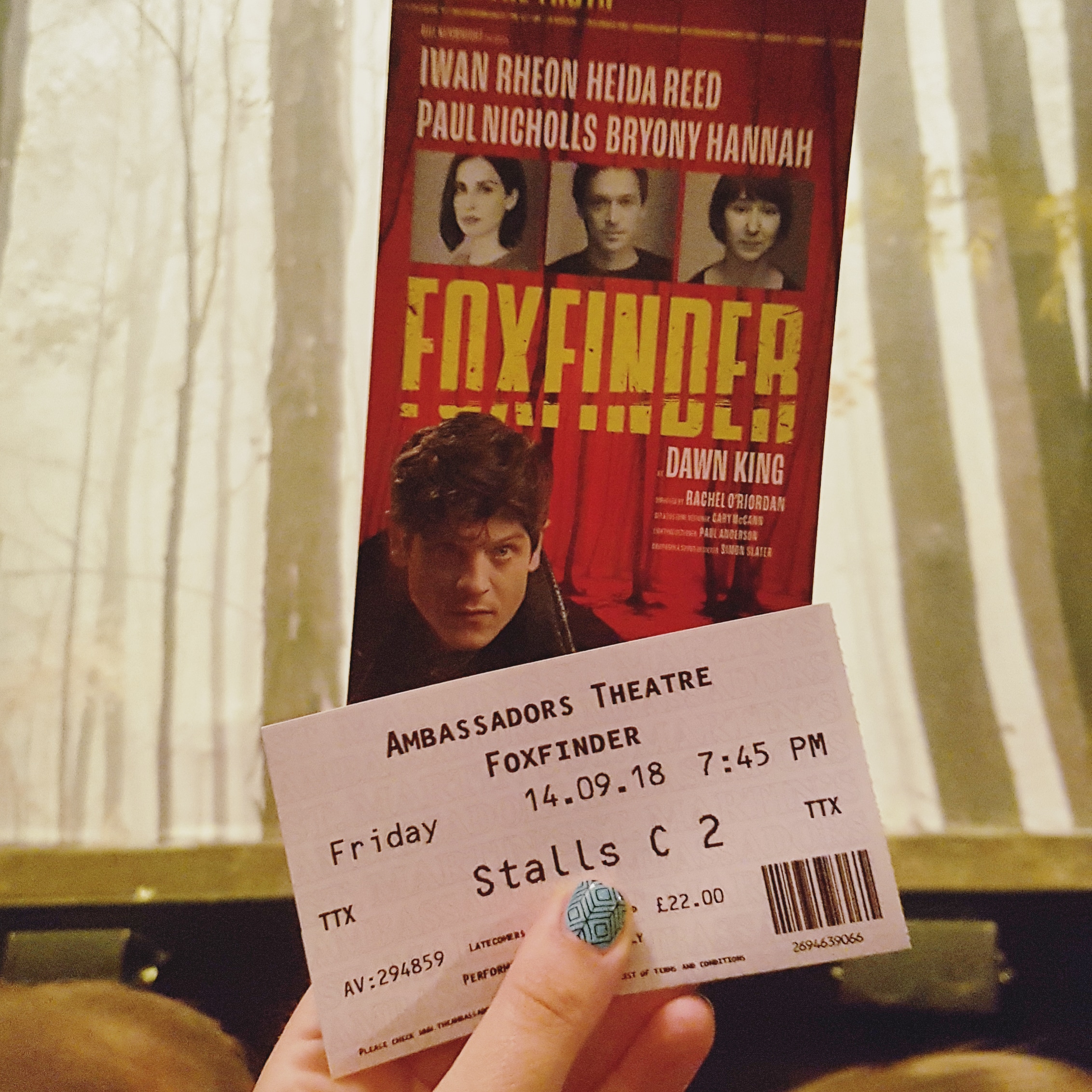 Being in lockdown due to the corona virus pandemic, I thought I’d use the time to work on my backlog of shows I never got around to review back when I actually saw them. I just don’t always have the time to write reviews right away and sometimes they just fall into an eternal backlog that I am now striving to work through! I actually viewed this production on 14 September 2018 and am writing the review with my theatre notes written during and after the performance.

I had read a lot of great things about this play, so when Foxfinder came to the West End, I had to take the chance and see it. With a star studded line-up and a contemporary topic, it sounded like just the thing to go see.

What struck me first was the stage design, blending the outside with the inside in an unusual and stark way. Trees dominated the stage, with many in the background and a few strewn throughout the kitchen/living room setup at the front of the stage. Throughout the play, the woods would further encroach on the scenery and give a subtly claustrophobic feel to the whole production. I have heard from other theatre goers who thought the theatre was too large to properly showcase such subtle and intimate production, but I was lucky enough to sit right in the front, and thus didn’t have that impression at all. It felt very close and personal to me.

Foxfinder is a bleak story that teeters somewhere between dystopian future and alternate past and focuses on one family in a world where propaganda and conspiracy theories rule. The Covey family have just lost their son and cannot meet their production quota with their small farm, thus the government has dispatched a young foxfinder to find out what the problem is and whether the dip in production is due to a fox infestation. In this world, foxes are mythical beasts and foxfinders are trained from earliest childhood to find signs of infestations. Led by the phrase “the absence of the beast is a sign of its presence” it quickly becomes apparent that the foxfinder is dispatched to find truths and signs of civil disobedience rather than an actual animal that might be causing trouble.

The foxfinder quickly becomes suspicious, of both Mrs Covey as well as his own mission, and dark secrets come to light slowly. There is a definite sense of dread and danger throughout the production, marked by subtle reactions, palpable fear, and the slowly encroaching forest that takes more and more space away from the actors, forcing them to the very front of the stage as the plot intesifies.

I was completely enraptured with the story and the subtle manipulation that led to the reveal of tightly kept secrets. It was bleak and terrifying in a very contemporary way that seems to fit with the current political climate a little too well. A gorgeous production that worked really well and left me feeling uneasy and wary in equal measures.