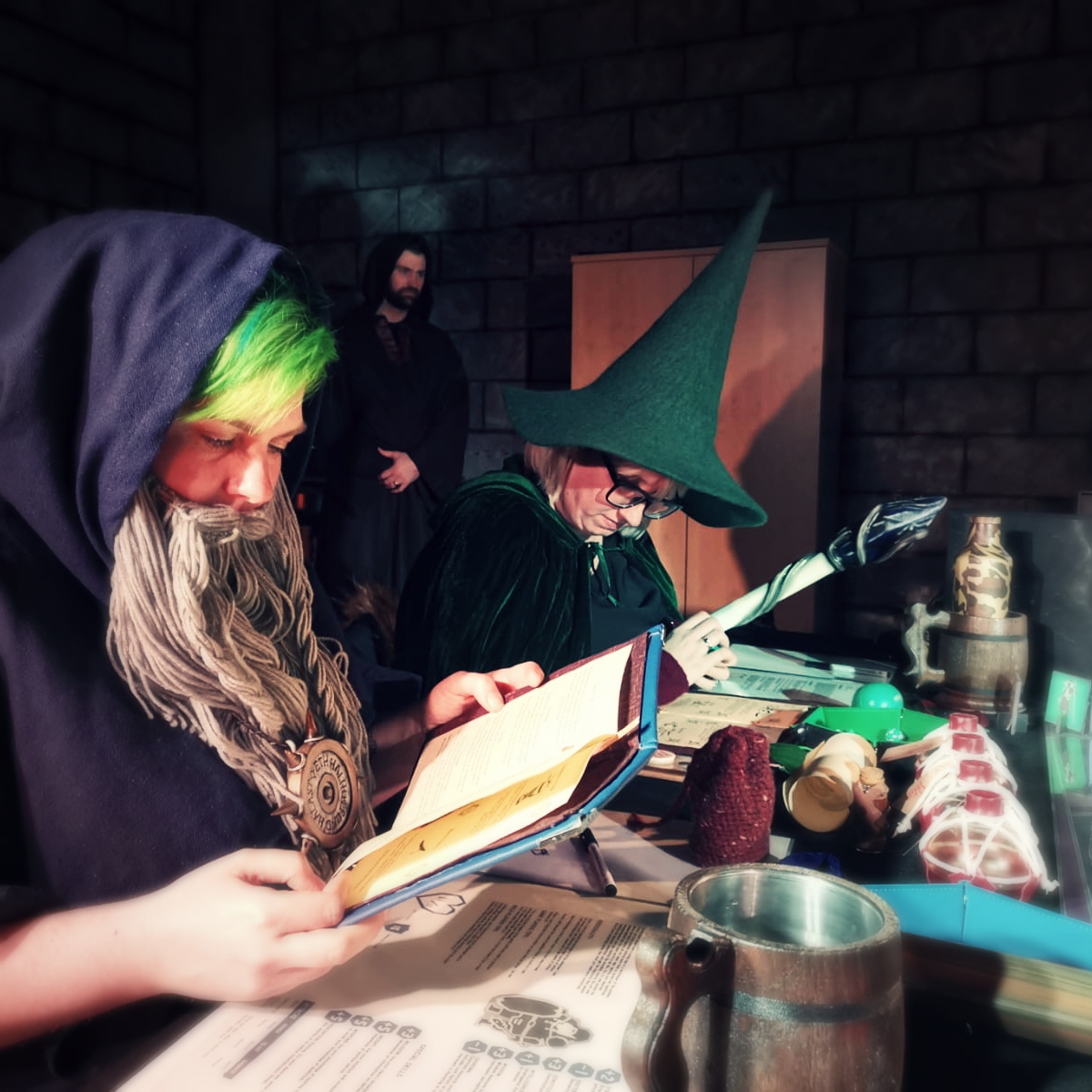 On Thursday night I was invited to try out the new immersive game by The Adventure Is Real, a combination of roleplaying games, boardgames, and immersive theatre. It was a whirlwind of an adventure to get through, and we had a whole lot of fun with it.

Thanks for the invite, Love Popups London.

When we arrived at the Grow Studios, we were immediately welcomed and outfitted with costumes for our chose characters. The list of characters for the adventure is sent beforehand, and all players can choose their favourite one they want to play for the night. the adventure is tailored for three to six players and any combination of the six characters to choose from works for this immersive game. You can choose to be the wizard, weilding magic and seeking knowledge, the fighter, a veteran soldier skilled in battle, the cleric, a dwarf devoted to the service of their goddess, the thief, a traitorous elf skilled at cutting purses and throats, the bard, a minstrel with their trusty ukulele, or the barbarian, a fierce orc fighter.

As we had a group of five players, we used all the character except for the fighter. I took on becoming the dwarven cleric and was outfitted with a hooded cloak, a glorious beard, a mace to wield, and a magical amulet. The dressing up element really made this a very immersive experience, all players in our group taking on the looks and weaponry of their chosen character.

The room is outfitted with dungeonesque walls, mood lighting that adapted in brightness and colour depending on what our adventure called for, a shelf full of props for the games master to use and pass out, and right in the middle of the room a large playing table, set up with character sheets, dice, money pouches, large tankards, and more. We received a short introduction and overview before beginning our journey, but if you’ve ever played Dungeons & Dragons or similar role playing adventure games, you’ll feel right at home and be well prepared for the adventure ahead. If you’ve never played any RPGs, The Adventure Is Real would be brilliant introduction that cuts down on the rules and decisions a bit and makes the adventure ready to play and easily worked through in about three hours, a brilliant introduction and preparation for those curious to find out more about role playing games.

As with most RPGs, we were free to make any decisions along the way, taking whatever route we wanted, interacting with the non-player characters in any way we saw fit. Out of the five of us, I was the only one who had every played any role-playing games, but we all fell into it and worked together as a team to find out way through our quest. Through our personal choices and great luck at charming non-player characters, we managed to not have a single fight until the very end when we found the big villain who needed to be stopped! There were several instances where we could have engaged in a battle, but chose to make friends and compromises instead. This adventure is super customizable and definitely depends entirely on player decisions, which is lovely to see. The games master is very flexible and worked tirelessly to make the experience super immersive and interesting for all of us.

This is definitely a very alternative and unusual thing to do in London. This company basically took the intimidating complexity of role-playing games and made it palatable for the inexperienced player while keeping it interesting for the avid afficionado. The adventure was engaging and interesting without being too complex, and there is a second one that is basically a sequel to the one we played.

With the costumes, props, maps, ready-made character sheets, custom lighting and music that was ever changing depending on the imagined surroundings, an enthusiastic games master, and a very well thought out beginner’s adventure, I can’t recommend this experience enough! So, if you’ve ever wanted to try role-playing, or just like customizable and immersive experiences, grab a group of friends and book your adventure! We had a lot of fun and I’d definitely return for the second adventure.