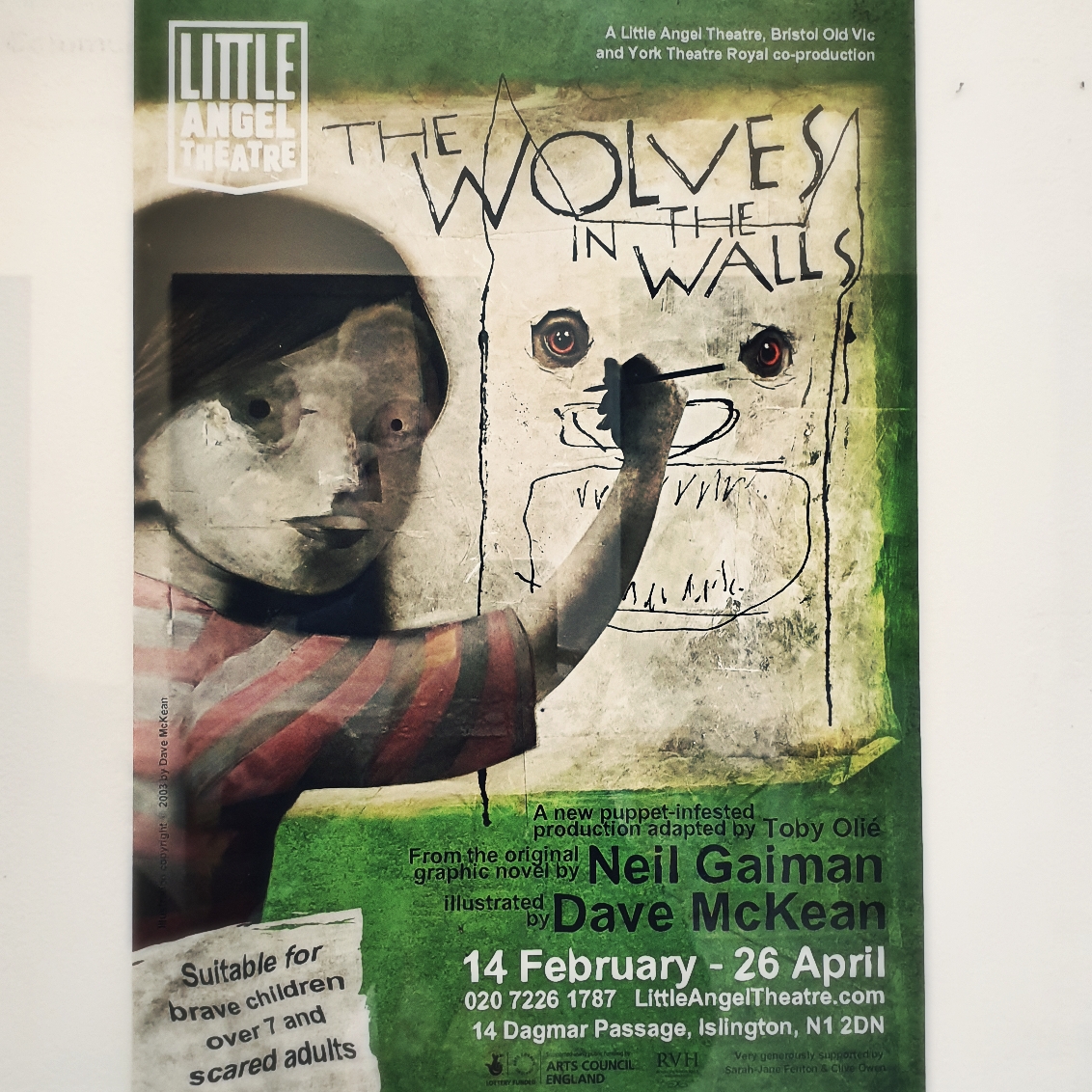 Though I was not in the company of children in the appropriate age range, I really needed to experience this one! Another play based on the work of one of my favourite authors, not something to be missed. So I grabbed a friend and headed out to see The Wolves In The Walls at the Little Angel Theatre, based on the story written by Neil Gaiman and illustrated by Dave McKean. It’s a creepy but fun story for children, produced as a 50 minute puppet show performanced aimed at children over 7 years of age.

I’ve seen a lot of children’s productions at this cute little theatre, so at first it felt a bit weird to attend without kids in tow, but as there were quite a few unaccompanied adults present, we settled right in and took seats towards the back.

The production relies on charming puppets and minimal props to tell the story of Lucy, who is sure there are wolves in the walls of her family home, but of course no one believes her until it is too late. The puppets for Lucy and her family are beautifully constructed, but once the wolves come out of the walls! They are the just the cutest creepy wolf puppets I have ever seen! And they’re so bouncy and flouncy, it’s delightful to watch. Especially the scene of what the wolves get up to when they scared the family out of their house is  just comedic gold and got laughs from the entire audience, great and small.

With a mix of shadow puppetry and hand-held puppets, this show works extremely well, with the aesthetic clearly being based on the illustrations of McKean. I wasn’t too sure the songs were strictly necessary, but they’re charming nonetheless. The pacing works well despite the show being quite short and thus condensing the story a bit, taking the most important plot points and throwing in a bit of whimsical silliness for good measure.

I really enjoyed this short puppet play version of The Wolves In The Walls. It was definitely a lot less creepy than I expected, I’d say it’s probably suitable for children 5 yrs and up. The play is still on at the Little Angel Theatre until 26 April, after which it’s set to head off on a tour. For more information, check the production website.

The only negative I can raise is that I am again baffled by how many fully grown adults can’t keep their bloody phones turned off for a measly 50 minutes. It’s so obvious and annoying in a dark theatre, and such a bad example for the children they’re with. Stunning that so many people don’t even seem to consider what they’re teaching their kids when they make it so obvious that they can’t spend the better part of an hour just focusing on a play rather than checking their phone every ten minutes. Ah well, not the theatre’s fault and definitely not the production’s fault. I’d still recommend seeing this play if you’re a fan of the story or have children who enjoy funny stories with a scary element to them.