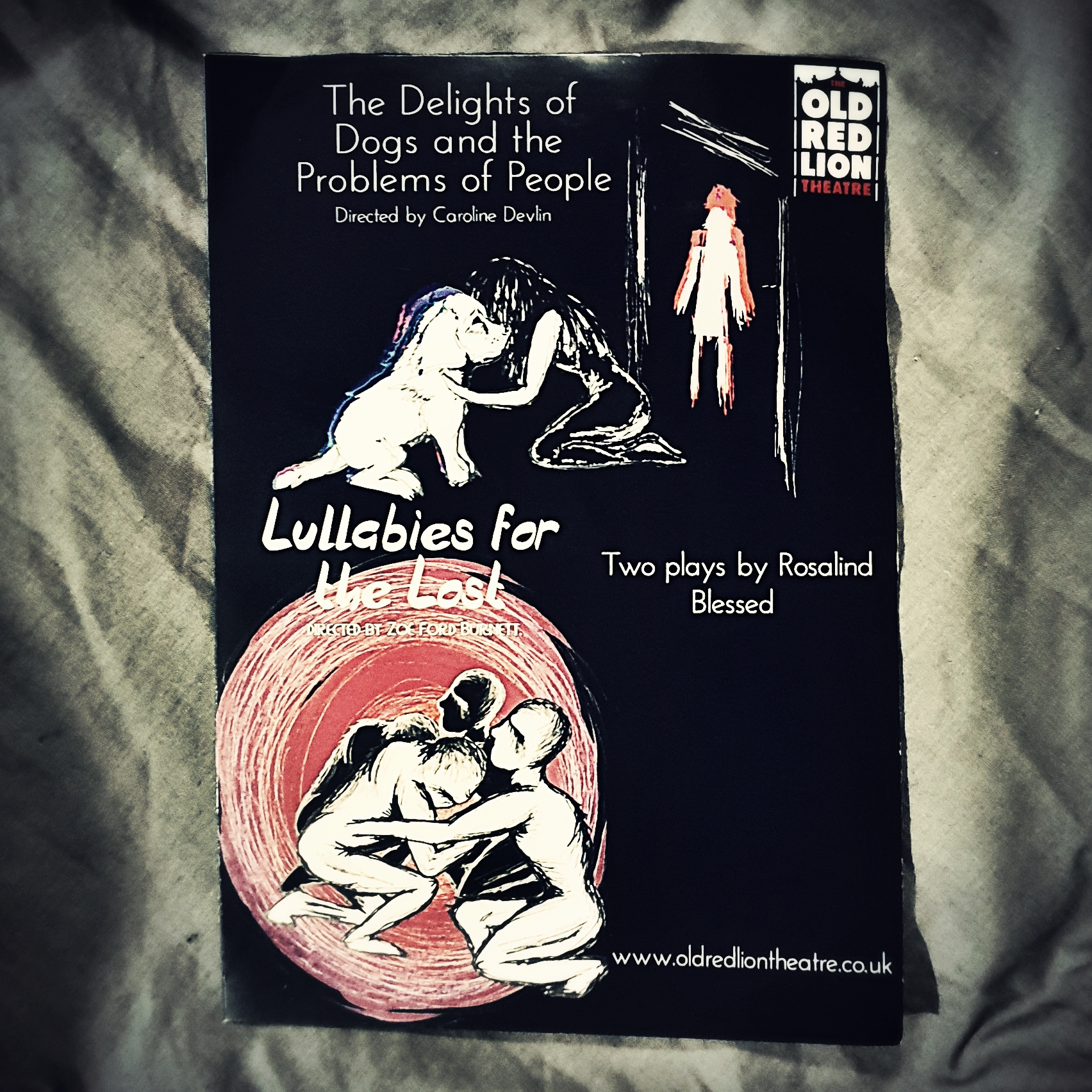 The Old Red Lion Theatre is currently hosting two plays by Rosalind Blessed, showing alternately until the 1st of February. I was treated to a double-showing on Thursday night, starting with Lullabies For The Lost, a 1hr 45min play focussing on mental health and human struggles.

The play is set in a mental limbo of sorts, eight lost souls caught in an empty room, doomed to re-tell the tale of their broken lives until the room decides to let them leave. At times they support each other, at times they wind each other up. One by one, the characters step forth to elaborate on their mental anguish, the story of how they came to fall into their unhealthy patterns, how their lives were taken over by these voices in their heads, these patterns of behaviour.

Human struggle is so varied and personal, yet so familiar for so many of us. From the man speaking about his social anxiety that stops him from seeing his friends while also agonising about what his friends might think of him and how long he can come up with excuses before they turn away, to the woman speaking about loss and fear and how her life doesn’t have the meaning she always thought it would have, falling apart inside while still keeping up appearances to the outside world. There are so many bits and pieces to relate to, told in emotional and jarring speeches. There surely is something to relate to for everyone, though it can be difficult to listen to at times. I do believe it is important to explore the difficult topics of life, and seeing mental health and personal struggle discussed so openly is a beautiful thing.

Lullabies For The Lost is a jarring, at times bleak, exploration of the human mind, with pieces of humour and lightness thrown in, and a resolution full of hope and love. Not an easy viewing experience, but definitely an important one. If you’re open to explore mental health and human behaviour in an equally funny and distressing play, this one is definitely for you.

The second play of the night was the 70 min play The Delight Of Dogs And The Problems Of People, an exploration of a relationship devolving into darkness. A mis-matched pair falls madly in love, but slowly their personalities take over the romantic beginnings and the relationship, as so many do, falls apart. But one of the partners has a harder time letting go than the other. Wrapped up in all this is a very sensitive rescue dog.

It is a compelling story told in bits and pieces with many back-and-forth time jumps. It is not quite clear how long the relationship existed in the first place though, as the talk about the wedding anniversaries makes it seem a lot shorter than the way the two speak about all the years they’ve been together. A terrifying exploration of abuse and how normal and romantic it can seem at first until it isn’t anymore. For me personally, there was a little too much shouting and screaming in this presentation, as the theatre is really quite small and someone screaming at the top of their lungs in a restricted room just a meter away from you can be very unpleasant after a while. I find this in many smaller pub theatres though and wish actors would adjust more to the size of the room to protect viewer’s ears a bit, but this isn’t just specific to this play, I’ve found larger productions to be getting too loud at times as well.

The story is very dramatic and at times painful to watch, because it feels so real, very human and terrifying. Seeing a character go from love to hate to fear is intense and beautiful. It did rub me the wrong way a little that the abuser in this story was shown as someone to relate to, almost as if he was in the right with all the things he did, almost as if we were to feel sorry for him, which made me very uncomfortable. This did aid in making it more clear that abusers often do not seem to be what they are and are indeed very good at reeling people in and manipulating them in so many ways.

The Delights Of Dogs And The Problems Of People is definitely an intense exploration of the capacity of humans to destroy what they love out of desperation and hurt, whirling emotions flying through the plot, the almost reversed timeline revealing more and more of the disconnect between what is at first presented and what actually happened. It was an interesting show with many twists and turns, and definitely worth watching and a beautiful conversation starter.