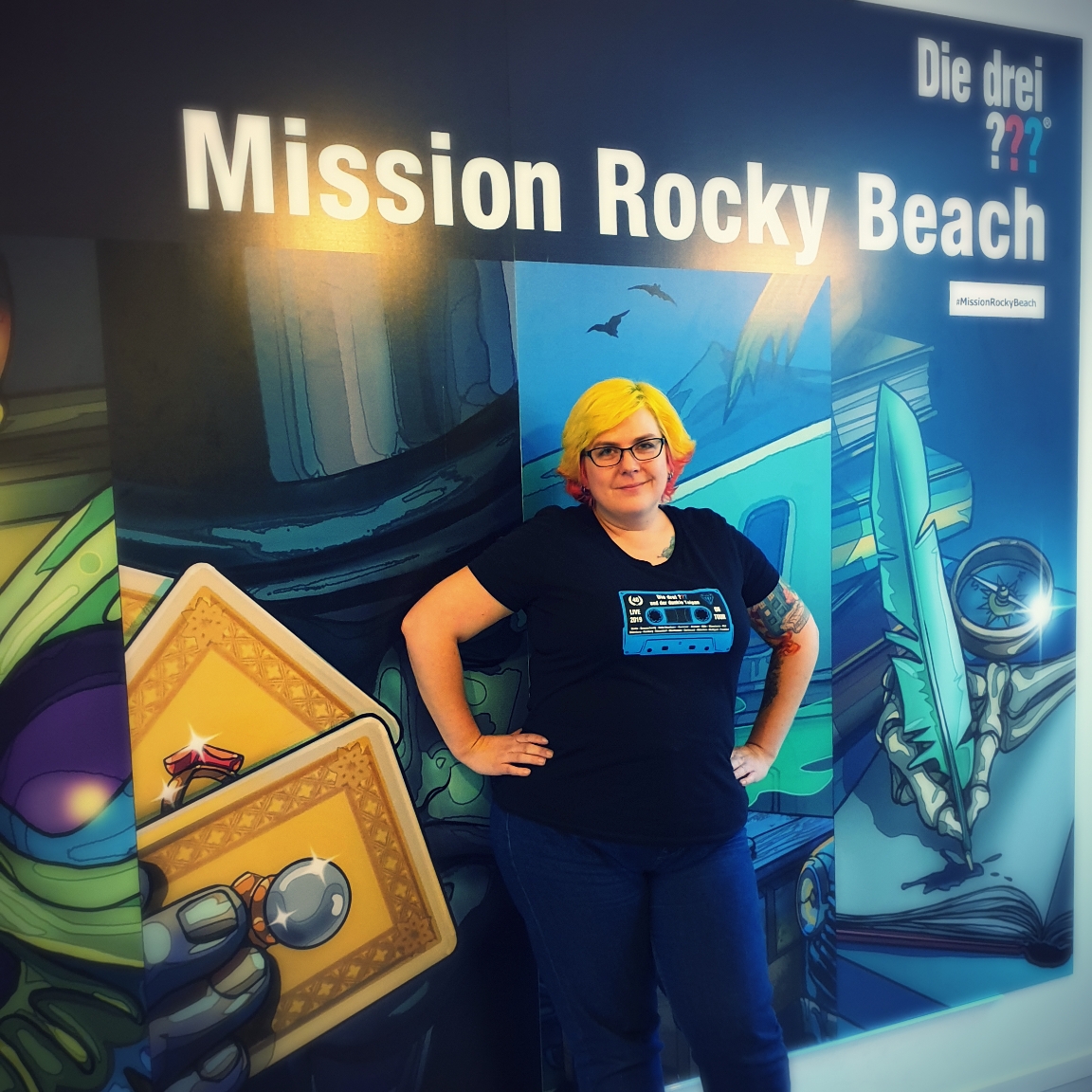 So, this one’s likely only going to make sense if you’re German, but I’ll try to explain. In Germany, the majority of people growing up in the 80s and 90s did so with the tradition of listening to audio play series to fall asleep. The most successful one of them being Die Drei Fragezeichen (lit. the three question marks, after the American junior book series Alfred Hitchcock and the three investigators) which first released in late 1979 and is still popping out new episodes every few months. Many listeners have been fans for a very long time, including myself. I think I started listening to them around 1988 and haven’t stopped yet, often still putting on an episode to fall asleep to.

The series revolves around three young boys (who have aged into teenagers over the 40 years the audio play series has existed, but are still being voiced by the original actors who started the job as young children in the late 70s) living in Rocky Beach, which is located somewhere between LA and Santa Monica. They have their HQ in an old caravan hidden among other random debris on the large scrapyard (now rebranded into a second hand wares business) belong to the uncle of one of the boys. From here, they work to solve missing persons cases, thefts, mysteries, hauntings, and sometimes even assist the police to thwart or solve larger crimes. Obviously, it’s the perfect tie-in for an escape room!

So, off I went to Cologne with an old school friend to try out two rooms at Mission Rocky Beach, a childhood dream come true, to be honest. I’ve always wanted to be one of the investigators!

The first room we tried, Die drei Fragezeichen und die Truhe der Meister (the three investigators and the chest of the masters) revolves around the premise that the scrapyard owner has found a mysterious old chest, locked with numerous different mechanisms, in an estate sale. But soon the boys discover that others are after the contents of the chest as well and we have an hour to open it before anyone else has a chance to steal it.

The room itself is phenomenal, being a rebuild of the above mentioned caravan, parts of the crowded scrapyard, and a tool shed that is also often mentioned in the series. Original voice actor recordings are abundant and even a few Easter eggs for avid fans are hidden among the various decorations. As a fan, it’s such a brilliant experience to actually walk through these sets that have always just existed in the imagination before. And having the original voices guide and ask for our help was of course thrilling!

Most of the game consisted of finding out how to open all the various parts of the chest of course, which did feel a little limited here and there, but was still a very fun race against the clock with a plethora of different mechanisms and techniques to be discovered and unlocked. This isn’t just a padlock style room, there’s loads of creativity utilised here!

Overall I’d give this room a good 4.5 stars for the thorough theme and interesting game mechanics.

As it’s quite the trip to Cologne, we of course did a second room right after, tackling Die Drei Fragezeichen und das Erbe des Geisterpiraten (the three investigators and the legacy of the ghost pirate) as an added adventure. This room starts in a seaside pub with a storm howling outside and us only having an hour to uncover the mystery of why the pub is haunted by a ghostly pirate.

This room was just so much fun! It doesn’t have any original sets mentioned in the series, but the story does feel very accurate to the kind of stories the series features. Again, original voice actors are employed to give a good atmosphere and tie the story in well. Apart from that, it was a great pirate themed escape room with lots of hidden secrets and really fun game mechanics that I hadn’t encountered before. We very much enjoyed this one and all the little fun extras we discovered along the way.

This second room gets a solid 5 stars from me, so on average I’m rating Mission Rocky Beach a great 5 stars, and hope to return to tackle the other two rooms at some point soon! They have been so thorough in decorating and themeing everything perfectly, an absolute dream come true for a fan!