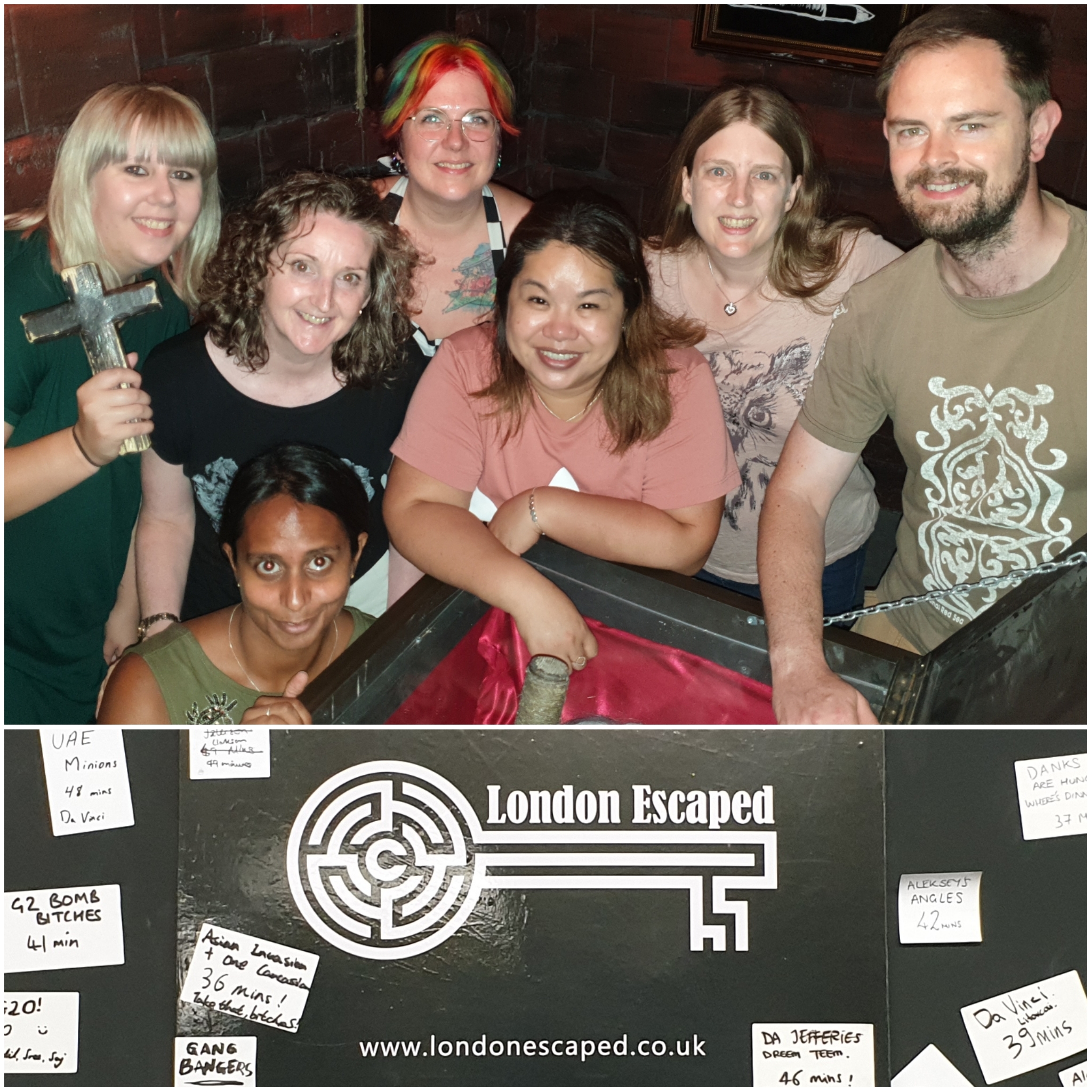 In total, we played three rooms at this company, you can read the other room reviews here: White Walker and School Of Magic

Vampire Slayer was the first, and most disappointing room, we played at London Escaped. Advertised as one of their most difficult rooms, we expected high standards, but the storyline and props fell completely flat of that. But let’s start at the beginning.

Our host seemed quite bored and disinterested, we had to ask her to come and start our room because she went back to the office to play on her phone while we got ready to play the room, and then stood around and waited and waited. Really bad start, that. Her introduction made it seem like there would be a lot to do in the room, as she kept reiterating how difficult the room is and how many teams struggle to make it through. She also handed us a kind of walk through sheet that basically explained all the steps in the entire room in a “solve puzzle A to open door B” style, which is just proof of how disjointed the room itself is, as these things should be obvious through the puzzles and games themselves within the room, rather than being explained through a cheat sheet.

Many of the props seemed really badly made and torn apart, though the room is barely half a year old. Some puzzles were really just difficult to solve because it wasn’t apparent what needed to be done, or they were presented in a way that was hard to even see. I really liked the idea of having black light puzzles inside coffins, but the coffins weren’t big enough to stand in them and still see the puzzles, yet you couldn’t see them from the outside. We spent more time trying to figure out what was supposed to be written in the coffins than we did actually solving the puzzles once we had figured out how to read them. Unnecessarily complicating the access to puzzles isn’t making it a difficult room, it’s just annoying.

We spent a lot of time just standing around trying to figure out what to do next because puzzles and their consequences weren’t obvious, for example a puzzle that was supposed to open a door did nothing until we asked through the walkie-talkie if we did it wrong, explained what we had done, and suddenly the door opened, so it looks to be GM-activated rather than puzzle-activated, which is really bad when the GM isn’t paying close attention.

There were some decent puzzles in the room, but with the low quality of the props, walk-through to make things make sense, and a disinterested GM, it was not a good experience for our team. We left quite disappointed, especially since some on the team had previously played other rooms at the venue and really loved the high standard of props and puzzles in them. So, this room seems to be an outlier in terms of quality and storyline.

The room is advertised for 2-12 players, but I’d say 4-6 is the sweet spot. Twelve would definitely be way too many people, there were 7 of us and we struggled finding enough stuff to do at the same time, so I wouldn’t put more then 8 into this room at an absolute maximum.

Unfortunately I can’t recommend the Vampire Slayer room at all. I really wanted to like it, as I’m a huge fan of Vampire lore, but it was just not a good quality room in any way. We excaped in 54 minutes, but I feel like only about 20 of those were spent actually working on puzzles. Good basic idea, but lack of logical storyline, and really bad execution in the prop department.