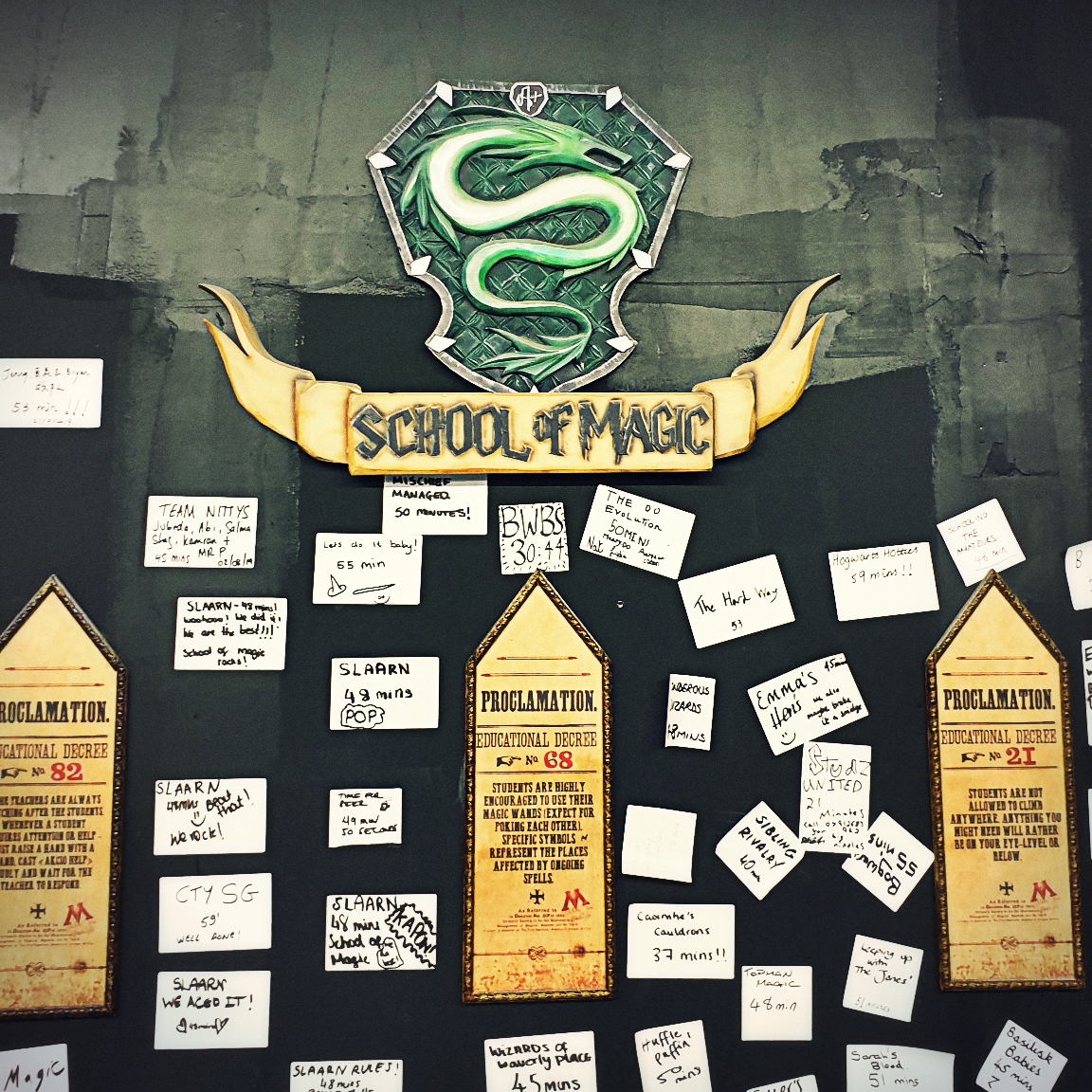 In total, we played three rooms at this company, you can read the other room reviews here: White Walker and Vampire Slayer

We had a different host this time, Katie, who was super friendly and energetic, which made it a whoolly different experience. She was very engaged and her introductions to the rooms were great.

I was quite excited to get to try the School Of Magic room at London Escaped, as it looked well done prop wise. This company always leaves its room doors open when no one is playing a game, so you get to walk around and have a look at their other rooms. I saw this one while waiting to play another room and really wanted to try it.

The room has many quite obvious puzzles that are easy to find and quite straight forward to solve, though at times a little tricky. This room is child friendly and it really shows, the puzzles are fantastic for 8-14 year olds, I’d say. It was really fun running around and trying to make sense of everything. Connections were obvious and logical, the few times we got stuck were absolutely our fault for being a bit oblivious at times.

I did have one bigger complaint though, and that is the mechanism that leads to the second room. Up until this point, the room was, in theory, fully accessible, but the second room is only accessed through a small chute players need to crawl through. Super fun for many players like me who like an immersive entrance, but an absolute no-go for others who might have mobility needs and simply cannot crawl on the floor. Most rooms now offer a way for one or more players to use the smaller, immersive entrance, and then open a larger one for others to just pass through. This room doesn’t have that. There’s the option to just open the exit door and access the second room from the outside, but it really breaks immersion.

The second room also didn’t have a lot to do in it, so it seemed to be under-utilized for being so well decorated and propped out. Once we entered the second room, it just took a few minutes to finish up the last few puzzles to find the Alchemist’s Stone and win the challenge. I’d have loved to see a few more intricate things to do in the second room.

This room is suitable for 2 to 8 players, but as it took three of us only 40 minutes to escape, I’d say it’s perfectly suitable for a couple to play on their own, and possible up to 4 adults or 6 children at a time. Eight just seems like it would get too crowded. It’s great to see a room that works for two players though, and is absolutely doable for two! There aren’t enough of these around. Same with rooms suitable for pre-teens and younger enthusiasts, this room is definitely a great choice for junior escapologists!

Apart from the above mentioned room access, I also wasn’t super fond of the hint system. It was basically either notes pushed under the door, or the GM actually entering the room to tell players what they needed to do. I feel like a small sound system to give audio-clues would go a long way here!

Still, this was a fun room with good puzzles and a logical progression. We certainly enjoyed it very much. Three and a half stars for the School Of Magic at London Escaped.