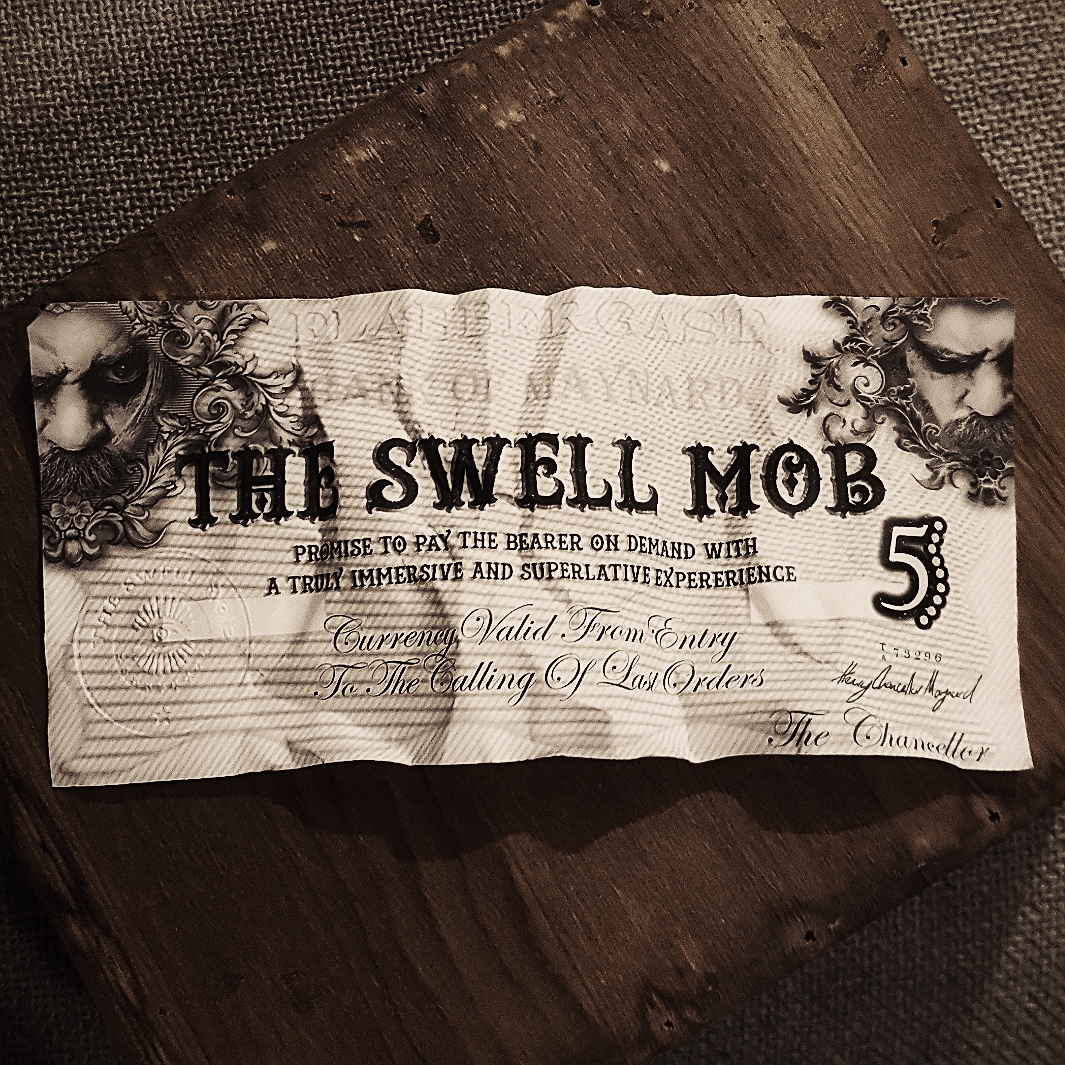 I was invited along to the press night of Flabbergast Theatre‘s new production The Swell Mob by Love Popups London, so I headed down to the Colab Factory near Borough Station to get immersed in the 1830s taproom setting of this whirlwind show.

Upon arrival we were greeted by a variety of seedy characters, given a small pouch with five bespoke one pound coins, and sent off on our individual adventures. The setting of an 1830s taproom is very well decorated and the characters all seem to have rich backstories. I immediately started speaking with some of the illustrious hosts to find out what this was all about. I was warned not to speak with the terrifying Master, received tips on who to bet on in the upcoming boxing match, and started gambling at the card table. I swiftly spent all my starting money on a ticket to the boxing match, and a little bet on the cards. Not left with enough money to place a bet on the boxers, I struck a deal to sell a lock of my hair to the taxidermist (she actually did snip a little of my hair off) in return for a five pound wager on the boxer I was previously recommended to bet on. All these little interactions were fully immersive, with the actors completely taking on their roles and working freely with the attendants.

Several of us headed down to the boxing match to cheer on our candidate, the rink was segregated by sturdy wooden walls and surrounded by many smaller rooms. It quickly filled up around the rink and the match swiftly went into full force. A beautifully choreographed boxing match with slow-motion effects and full body contact by the two boxers ensued. I’m not usually one to enjoy violent sports, but this match reminded me a lot of the opening scenes of the 2009 Sherlock Holmes film in the way it was presented. The fighter I had placed a bet on won the match and I collected my winnings, heading off to use my new riches for further immersive shenanigans.

I don’t want to give away too much on the plot or individual happenings, but there is such a plethora of things to do an discover, it was truly a joy to roam around, speak to actors and attendees, explore the smaller rooms downstairs, uncover secrets and play characters against each other. If you’re open to interact and play along, you won’t run out of things to do! Every single one of these actors is absolutely brilliant at full immersion and improvisation. After running errands and experiencing so many small scenes here and there, the main action ended up back at the taproom for the grand finale.

Unfortunately the ending didn’t quite live up to the amazingness of the rest of the event. In fact, one of the production people had to announce that this was the ending of the show and we had to leave all props behind and leave quickly as the next show would soon start. It felt a bit cut off without a real resolution. As most scenes happenes with only a few viewers at a time, there was no full storyline to follow. Interacting with the various characters did give us a chance to find out the basics of what was going on in The Swell Mob, but the ending just felt rushed and not fully complete.

As much as I had so much fun during the event itself, it did feel a bit cut short. I wish we’d have had more time to roam and experience everything full, and a more satisfying ending would help to accept that this was, indeed, the end of the event. Seeing as several of my group felt a bit cut short and unsatisfied with the finale, it just doesn’t give a full conclusion to the intriues and secrets we had uncovered along the way.

Still, this truly was one of the best immersive interactive event I have attended so far, so the hour or so you have to roam around is absolutely amazing! If it were finished with a better resolution at the end, it would be stellar. I’d still recommend trying out The Swell Mob if you love immersive theatre as the interactions with the actors alone are definitely worth it. A great night out, but due to the ending only four stars from me.