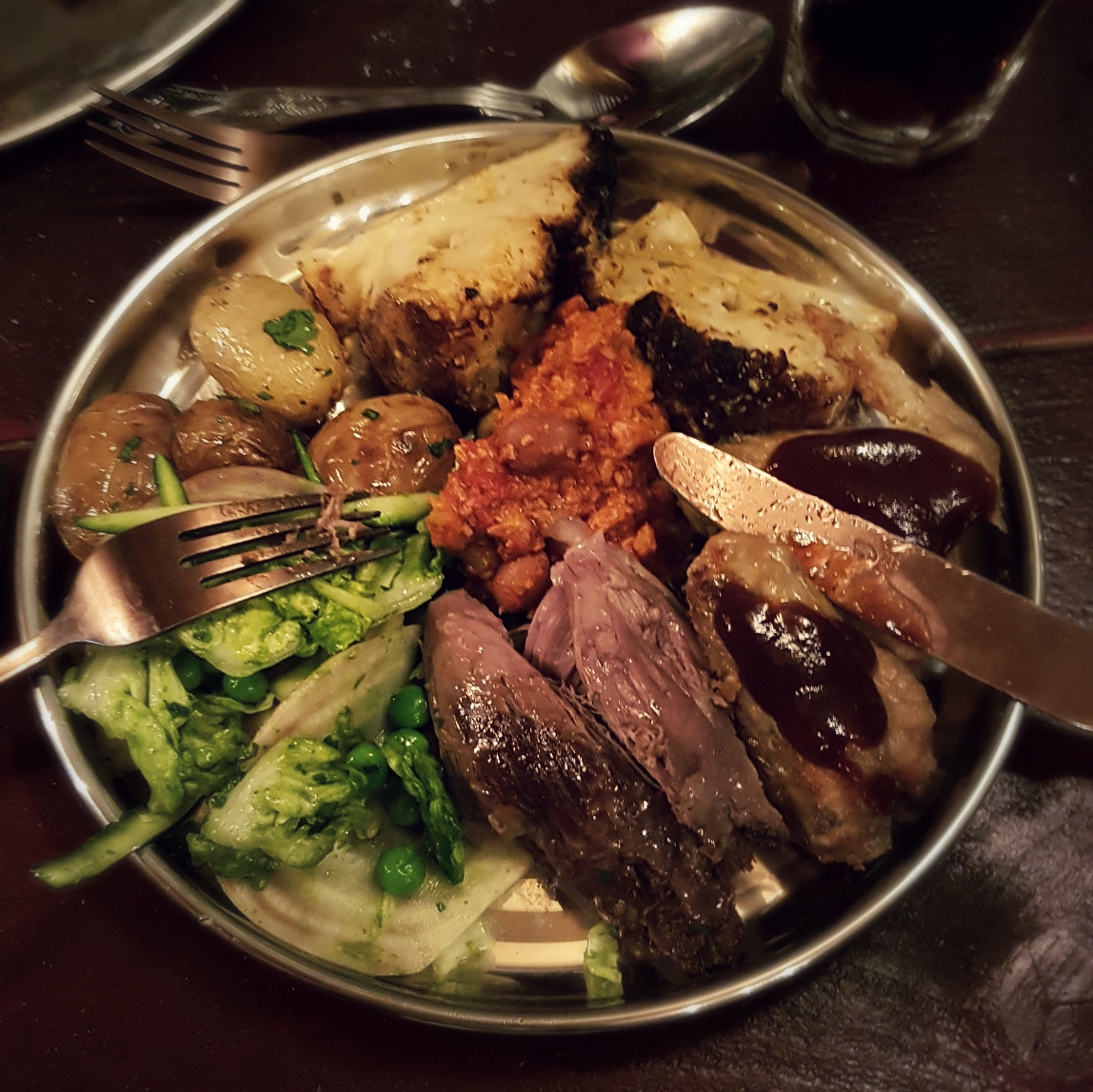 After having attended the previous Vaults productions of Beauty And The Feast, An Evening Of Meat, and Divine Proportions I immediately jumped for joy when Dinner Is Coming at The Vaults was announced. Tickets were bought, friends were recruited, fun was had!

Immediately upon entering I knew this was going to be glorious! There was a huge throne made from kitchen utensils sprayed golden in one corner, a busy bar in another corner, and a bunch of actors ready to entertain us and assign us a house to be loyal to. This is important later in the show, but don’t worry about who recruits you, you can change your allegiance later on.

These little interactions to begin with are a great warm-up to get into the game. I have to say, I ended up in a group of eight, and only three of us had seen Game Of Thrones, so this review will contain some of the non-initiated opinions later on. If you’re not a huge GoT fan or have never seen an episode, stick around and keep reading!

After chatting with various characters for a bit followed the predictable, dramatic death of king Jaffery Bearatheon. As the perpetrator was unclear, the tension grew and we were finally all whisked off to different scenes. Which scene you get to see depends on which house/character you have pledged allegiance to up until this point. Don’t be scared to be separated from your companions, you’ll be reconnected when it is time to sit down for the feast, and if you all get to see different scenes, you can fill each other in on the details.

After our individual scenes, we were seated at the large dining tables upstairs, beautifully decorated with electric candles and wooden logs, the room covered in draping to give it the appearance of a large tent. We are invited to still enjoy the wedding feast while we try to figure out who killed the king, and who shall sit on the throne in his stead.

The short scenes played out are really well done riffs on Game of Thrones, with dead on parodies of main characters, but cohesive and coherent enough to make sense to our non-GoT people.

Our first course, the Wildfire Boullion, came in a large serving bowl set on the table, and indivual deep dishes with the garnishes laid out on them. This vegan pea and asparagus soup was the absolutely the best soup I’ve ever eaten. And the feast style dining, meaning all meals are placed on the table on large platters or in large bowls and everyone just serves themselves however much they want, meant we could all have seconds, which most of us did. Best soup!

I don’t want to give any of the actual plot away, but the immersion was brilliant. Everyone of the actors was eager to talk to us, as we were going to vote for the new king via the bracelets they were giving out to us, so they really wanted us to switch allegiances and were very willing to give everyone small tasks or just flirt for a while. This made the time pass very quickly.

The main feast came with all the trimmings. Most of the mains were vegan, with chicken wings and lamb shoulder added to the mix, this way everyone gets to eat according to their dietary needs, which is brilliantly inclusive. From spiced cauliflower over roast potatoes to a fresh salad and a baked bean and sweetpotato pie, there truly was something for everyone, and just so much of it!

Pudding came in the form of a red wine poached bear with a swee and sour cream, it wasn’t too sweet, but a little hard to eat with just dessert spoons left on the table. I kept my fork from the main course, so I could eat it with less difficulty, but I wish they’d just served it with knives and forks so the silly thing wouldn’t slide around the plate whenever anyone tried to slice off a chunk with a dull spoon. However, the subtle taste was definitely worth the effort.

After dessert came the finishing scene, in which was determined who was the murderer, and who was to take the throne. The latter is decided by popular vote by the patrons, whichever character has the most bracelets of their house colour in the audience, wins the the throne. And everyone who has the correct color bracelet is treated to a glass of free wine! So choose wisely who you think will be the most popular candidate and pay attention to the intriguing murder mystery scenes inbetween the courses.

Dinner Is Coming is so well done and a whole lot of fun. As previously mentioned, five out of eight in my group had never seen an episode of Game of Thrones, yet they all absolutely loved the experience and some got heavily involved in talking to the actors and getting into the plot. Everyone thought the food was very well done and that the evening was very enjoyable.

I honestly cannot fault this production in any way, it was absolutely brilliant, super immersive, a funny parody that still makes sense to the uninitiated, and a lot of charm. If you can at all, whether you’ve seen GoT or not, do get yourself down to the Vaults to experience this amazing show.