We all know that the Rocky Horror Picture Show is a spectacle not to be missed, so when the 2019 World Tour rolled around to Wimbledon, of course I had to grab a ticket and come along. 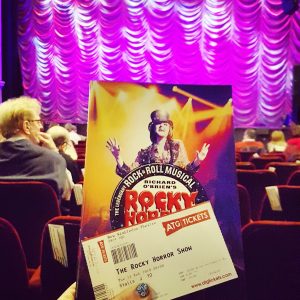 I mean… it’s Rocky Horror, there’s really not much more to say… if you’ve never been to a live show, you’re really missing out.

The running commentary between the narrator and the audience, the dance-alongs, the fully costumed patrons, it’s just so much fun!

Not that the production itself doesn’t matter, of course it does, but without the right audience, it just isn’t the same. The stage design is simple, but bright and effective. With a film roll scroll along the top of the stage, intense colours throughout and exchangeable wall decor to suit the different rooms.

Having simplified some of the plot to work better on stage, this show went all out with the songs. Strong voices croon out the classics, animating fans to sing along.

You can’t get too creative with the costumes, as they do of course still need to resemble the film versions, but they made some ever so slight changes to put their own little stamp of individuality on it while still staying true to the original. 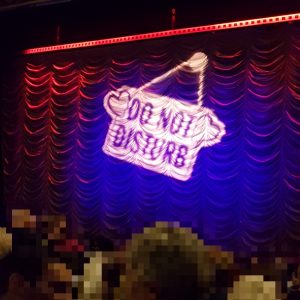 The atmosphere was definitely sizzling and it was a perfect mix of interactions and clap backs. What a great night! Five out of six rainbow sloths from me!