After having missed its first run, I made sure to secure tickets to the second London run of Grindr The Opera, playing at the shiny Above The Stag theatre in Vauxhall. 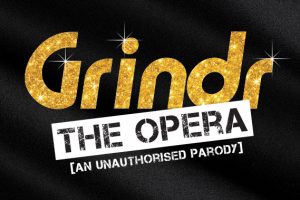 Grindr is a hilarious pop-style opera about gay hook-up culture, and especially the trappings of the popular app Grindr. Despite its focus on humour and parody, it touches on several current issues and tries to show representation of different men with different needs and wants.

The four men representing different brands of gay culture are Tom – a cynical man who isn’t quite sure what he’s looking for, Devon – a hopeless romantic looking for lasting love, Jack – a twink who hungers for uninhibited sexual encounters, and Don – a repressed daddy type who lives firmly in the closet and desires quick hook-ups with young men on the sly. These four men are guided and manipulated by Grindr, represented as a somewhat androgynous, mythical siren exploiting human lust and desire.

The small staging with light-up frames reminiscent of the screens the men appear and disappear on, light cables transmitting data, and an intimate atmosphere are the perfect set for this sung-through musical experience. The closeness allows the audience to see subtle facial expressions and feel like they are close observers. I don’t think Grindr would work as well in a larger venue. Especially the stellar performance of Christian Lunn as the personification of Grindr is so detailed and thoroughly intentional, I was glad to be able to see all the intricacies and subtle movements. Rooted firmly in between Frank N Furter and David Bowie, Lunn’s version of Grindr is an unforgettable leading man, strong and sensual, extremely confident and stunning. With his two assistants, Grindr is an ever looming presence, forbidding and doubt and commanding loyalty from his humble followers. 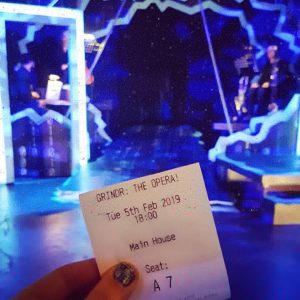 A beautiful story told with glitz and glamour, sensitivity and humour, Grindr The Opera is not to be missed! Full six out of six rainbow sloths from me!