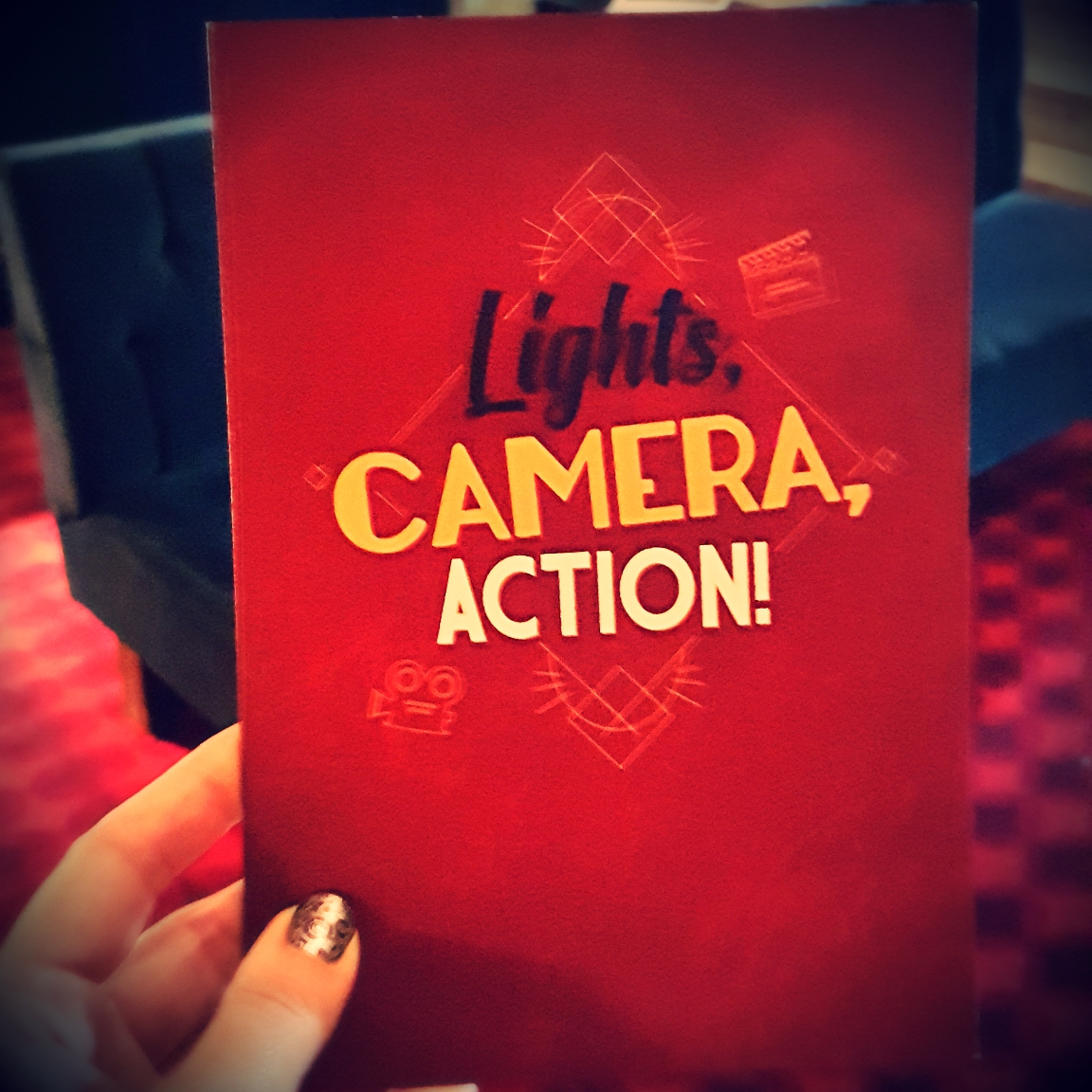 I was invited by the wonderful Love Popups London to check out a new event organised by A Door In A Wall, whose other events we have had the pleasure of experiencing before. Now, the new concept immersive event Lights, Camera, Action is quite different from the two previous ones I got to review, Dead Man’s Hand and Horses For Corpses, which are both more of a scavenger hunt murder mystery. This new event is all about the charm of old hollywood and the excitement of making your own movie.

Now, before I start, this was explicitly a preview event I participated in! We were asked to provide feedback and made aware that there will be flaws as this was the very first time they tried out this brand new concept. So keep this in mind when reading the rest of this blog, the finished product might be heavily improved and quite different from what we experienced.

The event took place at the absolutely gorgeous Mirth, Marvel And Maud, which is a beautiful Grade 2 listed venue built in the 1930s, that used to house the Granada Cinema. The venue is absolutely perfect for this type of event, but unfortunately it is all the way out in Walthamstow, so not ideal for a weekday night event that is scheduled to run from 6pm to 10.30pm. However, the venue does make the trip worth the while.

From the description of the event, it sounded like we would create up to three mini-flicks throughout the night, taking on different roles in the creation of these films. I had assumed we’d get to fully create these films, including the behind-the-camera parts of this process. However, it turned out that we were simply given scripts after picking a genre, then had to hunt down people to get hints for what elements to include in our film, and finally simply stood in front of the camera(phone) that the organisers operated. This could have worked really well, but there were quite a few issues to deal with.

Upon picking a script, we were given a time slot for a filming studio. The time time given to get everything on the list done and still learn lines and prepare for filming is quite tight, so we did feel quite rushed throughout the night.

The tasks to find out which elements to include in our films, for extra points, were quite fun to do, hunting down producers, actors, reporters, and special effects people. They were all quite silly, but I really enjoyed these small tasks and funny tips we were given. This was definitely my favourite part of the whole thing.

After getting all the information we needed, we could go to the prop desk to pick out up to six props to use in our film. Unfortunately this process was quite chaotic with many teams wanting the same items at the same time, props not being available when needed, and the prop lists for each genre seeming a little too long with too much to choose from.

The most chaotic part of the night was definitely the actual filming. With barely any time to prepare for the filming session we were shuffled into hastily set up “studios” that were simply in a small, open alcove with nothing but a vinyl backdrop hanging from the low ceiling separating the two filming areas. As we were filmed with a phone on a tripod quite close to the backdrop, there wasn’t a lot of space to work with and the visible space in the actual short film was waist-up and barely enough to have three people in the shot at the same time. Due to filming with just a phone, the studios being open to the pub, and another group filming just behind the backdrop, sound was absolutely atrocious (during the awards ceremony at the end I couldn’t hear much of what was said on screen) so there’s definitely A LOT of room for improvement on the filming front.

We managed to squeeze three short films into the three hours we had to work with. There was supposed to be an awards ceremony at 10pm, but as they were running quite a lot behind, half of our group left by 10.15pm with the awards show still nowhere to be seen. We were eventually shuffled into the theatre room for the awards after 10.30pm, so after the official closing time of the event. For a weeknight event that already runs quite late for an event so far outside of central London, this isn’t really acceptable and will hopefully be fixed before the official opening.

My takeaway from this preview event is that it’s definitely a great idea, but needs quite a lot of improvement to work smoothly. Mainly this would be a sorely needed improvement of the films recorded! The studios being so open means there’s too much noise, so a separate, closed off area would help improve this. Moving the camera further back for a larger visible filming area and making teams aware of what will actually be visible in the finished film would also improve things, and a separate microphone for better sound is definitely necessary.

I felt like the clue gathering part took too long to then still have time to learn lines and run through the whole script a few times, so more time between picking up the script and the studio time slot would help here. If that means that every team just gets to do two films, that’s still an improvement as we’d be able to focus more on what we’re doing and get a result we’d be happier with. It did all feel very chaotic coming up to the studio time slot, so more time would help with that and also give people time to eat, socialise, and just enjoy the evening. And most of all, the delay at the end that meant we all had to wait for the awards ceremony to start and didn’t get out until just before 11pm on a Tuesday night, definitely needs improvement.

Overall, I really like the idea behind this immersive event and am looking forward to seeing how the issues are smoothed out before the final production of Lights, Camera, Action!