I’ve never seen Company before, so when it was announced that it’s coming to London with an all new, gender-swapped, updated production, I had to grab tickets and give it a go! 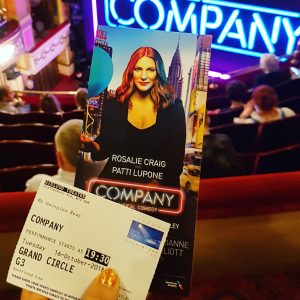 The story revolves around Bobby, a career woman who is celebrating her 35th birthday surrounded by all her married friends, most of whom have children, and starts contemplating why she hasn’t found the right man yet and what she’s really waiting for. This premise alone shows this musical’s age quite starkly, and it hasn’t aged well.

While this production tries to slap a sparkly, fresh coat of paint on Company, it just doesn’t cover up all the cracks and creases. Sure, it’s entertaining, and the updated characters can be quite fun to watch, but in the end it’s still just a musical about a 35yr old whose entire circle of friends is freaking out about their lack of a married partner. It’s 2018!

I do have to admit that I absolutely loved the inclusion of a same-sex wedding, and Jamie, played by Jonathan Bailey, is an absolute delight to watch, but it just doesn’t change the entire premise of the musical, and the lyrics of many of the songs, seeming quite outdated. That said, you probably want to keep in mind that I’m generally not a fan of Sondheim’s work, as I find much of it just too conservative and stereotypical for my personal taste. 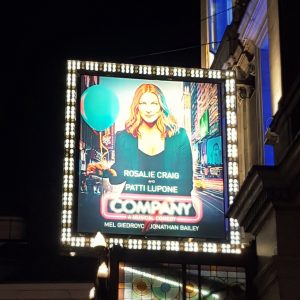 While the production definitely did the best they could, and the ever changing set is absolutely stunning in its construction and design, Company just doesn’t pass the test of time for me.

I can’t fault any of the actors, the staging, the design, the pacing, at all! It really is just the subject matter that doesn’t click for me. So, if you’re a fan of Sondheim musicals, or don’t mind a bit of old fashioned stereotyping with a fresh, inclusive coat of paint, definitely go see Company. It’s a fun piece of entertainment! Four out of six rainbow sloths from me.