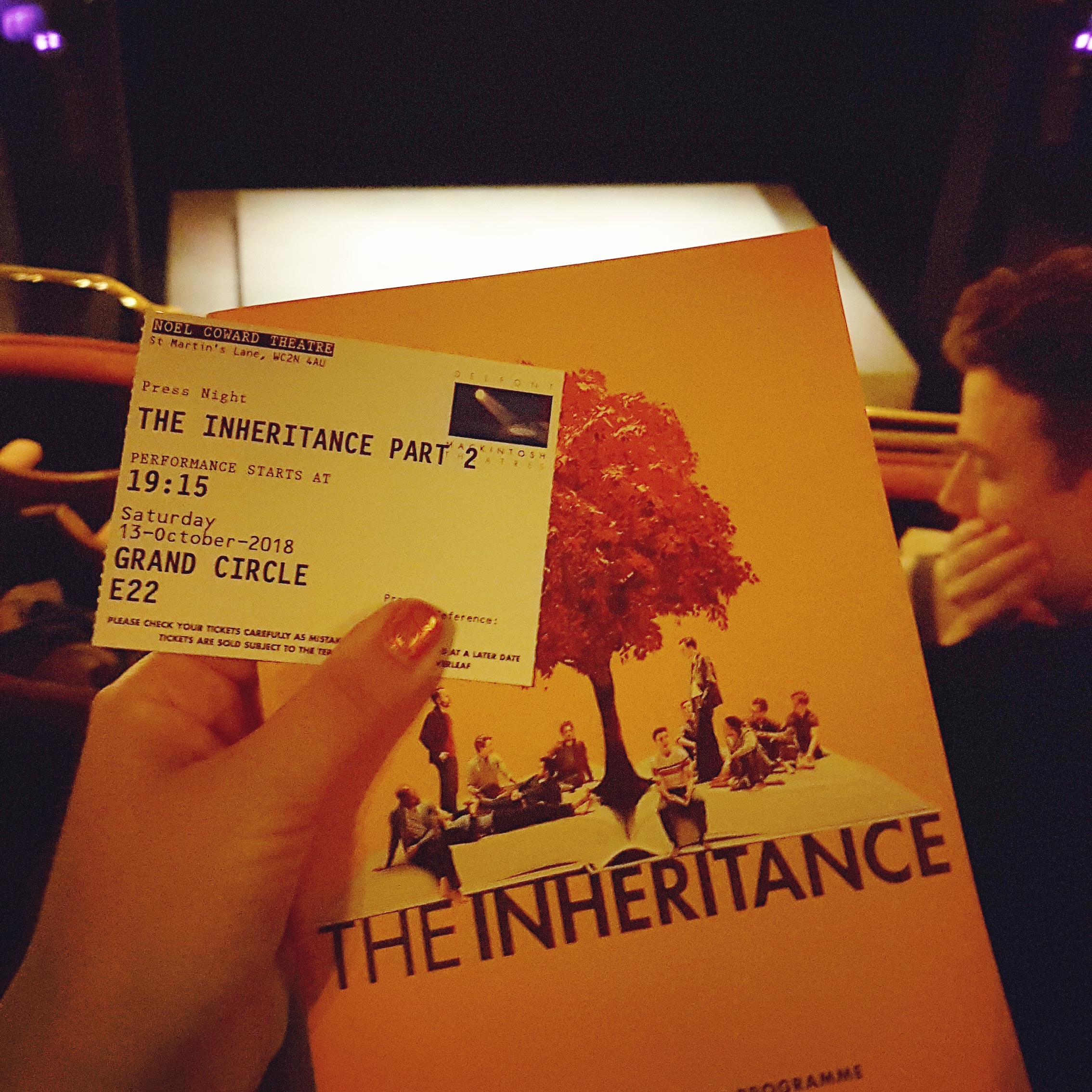 I was lucky enough to be invited to the double-show press night (day?) performance of The Inheritance, which is a play in two parts, each just over 3hrs plus two intervals, inspired on E.M. Forsters novel Howard’s End. The play takes this classic novel and plops it right into the present day New York by changing all characters to gay men of varying ages and social backgrounds, and making the aids epidemic of the 1980s a very central theme, exploring the impact on the younger gay community as well as the emotional trauma of the older generation that witnessed it first hand.

The stage is quite simplistic, a black background with a concrete-look floor that features a rectangular, slightly raised block. Throughout part one, the only change to this stage design is that the raised block sometimes lowers to suit a different setting and mood. Scene changes are achieved by very minimal use of props and very effective light design.

In part two, the stage design gets a little more involved, but minimalistic is still the main theme, which leaves lots of room for the actors to effectively explore the story without distractions.

Part one starts with what seems like a writing workshop, with a group of young men draped over the rectangular stage, focussing on their writing. A more mature character, Morgan, enters the stage and is immediately approched for writing advice, which leads him and the group of young men to start unpacking the story of the young couple Eric and Toby, creating the basis for this play in a fresh, interesting way. As the actors fall into their roles more and more, characters take shape, histories become clear, classes and political opinions start clashing, trauma and grief are explored, love is won and lost.

Part two seems more emotionally intense than part one, but I’m not sure wether that’s just because I became do heavily invested in some of the characters that their stories became more touching, more personal, or if it’s the fact that the subject matter takes quite a dark turn at times when dealing with death, mental health issues, and of course HIV and Aids. Throughout both parts, a sense of humour, including several laugh-out-loud moments are kept up, impressively meshing so well with the tear inducing parts of this storyline.

The way this amazing, gripping play is laid out, it is extremely touching, emotional, at times hilarious, at time devastating, always fascinating and interesting. Despite the length of this opus, I was focused on the characters and invested in their stories from the first moment through to the end, not even thinking about the time passing. A play that can capture my interest uninterrupted for an almost seven hour run is truly extraordinary.

Wether you’re part of the LGBT+ community or not, The Inheritance might just be the most important play of the decade! Dealing with so many social, economic, and political issues, you’re sure to learn something new about yourself and the world. Definitely take the time to see both parts, in sequence, to take in this masterpiece and be left in awe of the intensity and skill every single one of these actors demonstrate on stage.