I was given tickets to see H.G. Wells’ Time Machine at the Wilton’s Music Hall, and as it’s such a classic Sci-Fi story, I was quite excited to see it. 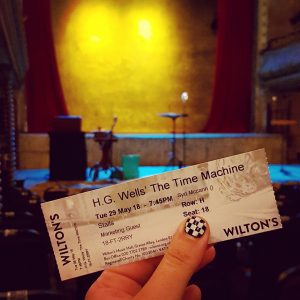 This production is set as a musical with the basic premise that a mysterious man shows up at a radio station to do a dramatic reading of The Time Machine. Thus, the whole thing is set as a radio broadcast with fun sound effects and a few songs thrown in.

I really enjoyed the reading and the songs, and especially the old school radio sound effects, but the entire time I wondered why this was set on a stage when it was so clearly a radio production. It was a great reading with added material, but really just felt like listening to a really well done radio broadcast. It didn’t need to be live on stage and felt a little out of place because of that. As it was advertised as a musical, I really expected a bit more. 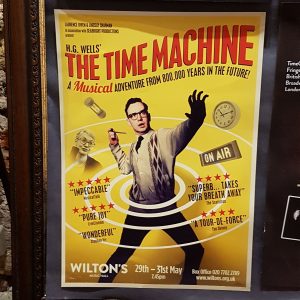 Still, it was very entertaining and well done, so four out of six rainbow sloths from me.