I have a complicated relationship with Secret Cinema. Some of their events are amazingly immersive, others just lack in engagement and entertaiment and don’t warrant the very steep price tag. But as a fan of the original Blade Runner film, I felt I really had to try this one out. 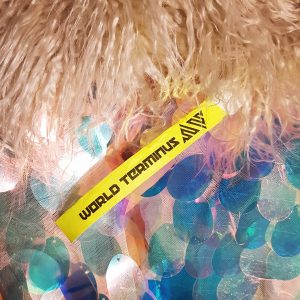 As usual with Secret Cinema events, we were all given sign-up information to receive a character we would play on the night. What’s a little annoying is that you don’t get to chose your character. I personally don’t really mind that much, but there are lots of people who are a little uncomfortable with some of the character choices. So, being able to chose a different character would be helpful for less outgoing people who don’t like just throwing themselves into anything.

You then get to assemble a wardrobe for your character, which was a whole lot of fun for this event as the futuristic fashion is quite outrageous. I didn’t buy anything from the official shop, as I find it a little too pricey for the quality they provide, but I found a lot of great items around London, including of course the obligatory see-through umbrella.

Upon arrival, we were processed in the usual Secret Cinema manner, where all smartphones and cameras need to be placed in an opaque plastic bag and sealed, as there is absolutely no photography allowed in side. This actually makes for an event that can be enjoyed intensely by all as no one ends up checking their phone a dozen times a minute.

There was A LOT to do for this one. The event space was gorgeously decorated with artifical rain, large screens, neon lighting, and all the things you expect from the Blade Runner universe. Several food stalls provided themed food, like the ramen featured in the film itself, and there were plenty of different levels, shops, corporate spaces, and little back alley tinker studios to explore. The actors did an amazing job and really made us all feel like we were part of their world.

I found plenty of characters to interact with, trade and do little errands for, have a short chat or help out with their businesses. There was much more to do than any of the other Secret Cinema events I attended, and with the space made to look so perfectly right out of the movie, it was amazingly fun. 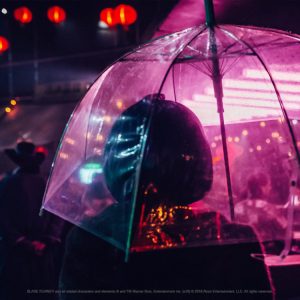 I only stayed for about half the film, as I was very tired and had to work early the next day, but what I saw in the first half was fantastic. They did their usual thing of having actors enrich the environment and act out scenes and background action while the film was running.

Everything was so beautifully and passionately done, I really enjoyed this Secret Cinema event and it was more than worth the money I spent on my ticket. Absolutely loved it, I hope they keep providing such rich environments for their future events! Full six rainbow sloths from me!