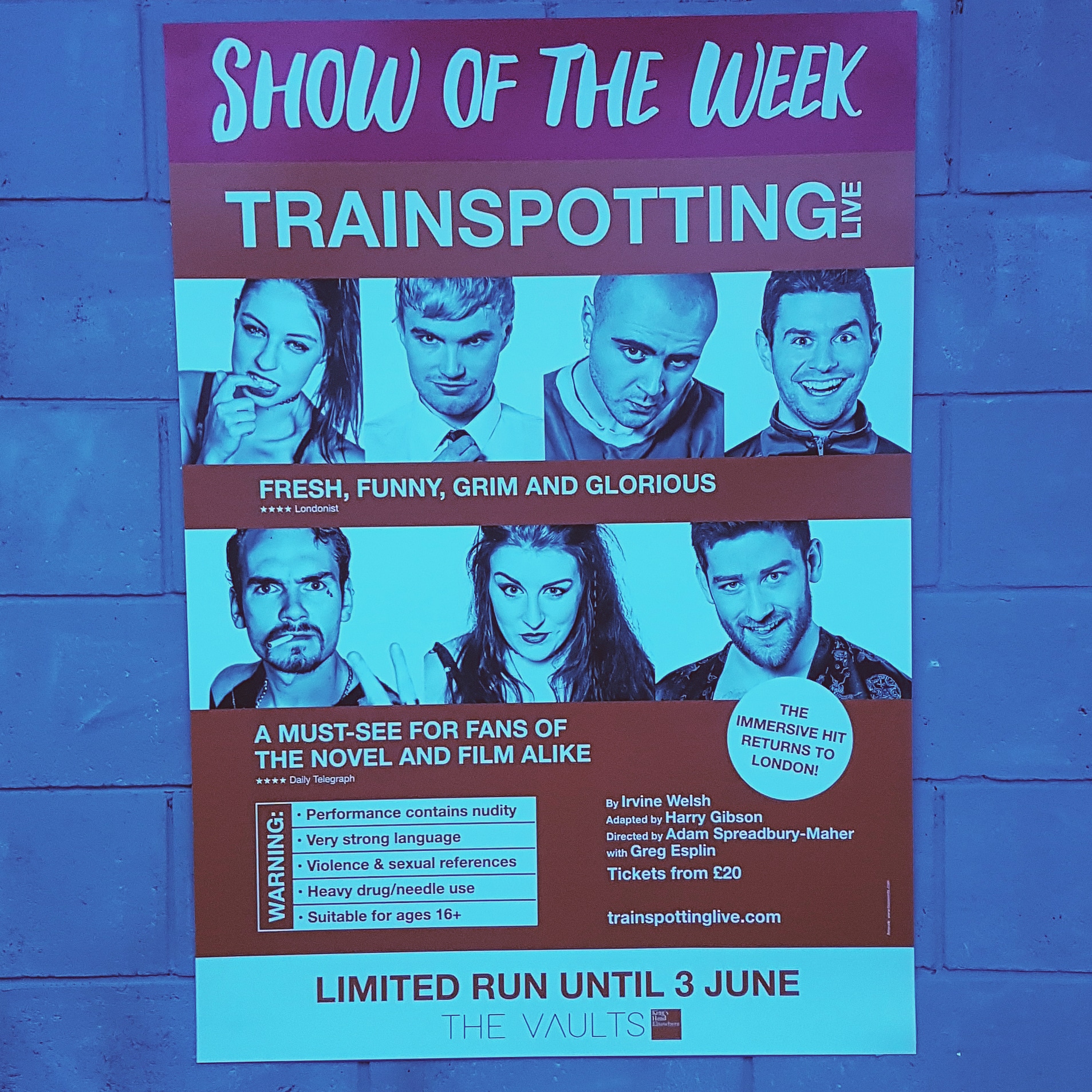 Back at my favourite haunt, The Vaults! This time for a spot of Trainspotting Live, an immersive theatre experience I wasn’t sure I actually wanted…

I’m not going to go into deep plot descriptions, just know that if you haven’t seen the film, you probably want to stay away from this immersive production. Partly because of the subject matter, and partly because it’s not a linear theatre production that brings the plot across well. With its disjointed pick of random scenes from the film, this is more of an experience aimed at fans and brave souls.

Having seen Trainspotting, I really didn’t know what to expect, but was a bit uneasy entering the bare, undecorated bar area. Most patrons seemed to have a similar experience, wearing expressions of doubtful excitement and shuffling around the area in small groups, while a few others loudly announced their exhilaration at finding the bar stocked with Buckfast. Those familiar with the film will know why.

When it was time to get started, we were led into one of the cavernous tunnel rooms of the Vaults, which was outfitted with bench style seating on both lengthwise sides. The room itself was dark, undecorated, slightly smelly and quite muggy. The perfect atmosphere for what was to come!

I don’t want to give too much away about the show itself, just know that the actors were perfectly picked out to resemble the screen characters, in some cases uncannily so! Some of the most intense scenes have been picked out and played out around, towards, and with the audience. And yes, the toilet scene is one of them!

I do wish they would have given a little more consideration to sticking to the plot order, to make it possible to recommend this show to those who haven’t experienced the intense madness of the film it is based on. As it stands, I think it would be difficult to follow along and understand what is happening, simply by way of how the characters are simply thrown into random scenes and the most shoking plot points pulled out of context.

However, for anyone who has seen Trainspotting, this show is an absolute must! Perfectly shocking, jolting, entertaining, and very exciting to be a part of. Do expect to be yelled at, covered in dubious substances, taunted, touched, and thoroughly entertained!

Four out of five from me, the only deduction is, as mentioned, for the way the scenes were selected and presented like a disjointed fever dream, which unfortunately excludes unprepared audience members. But if you’ve recently seen the film, it’s definitely an experience not to be missed!