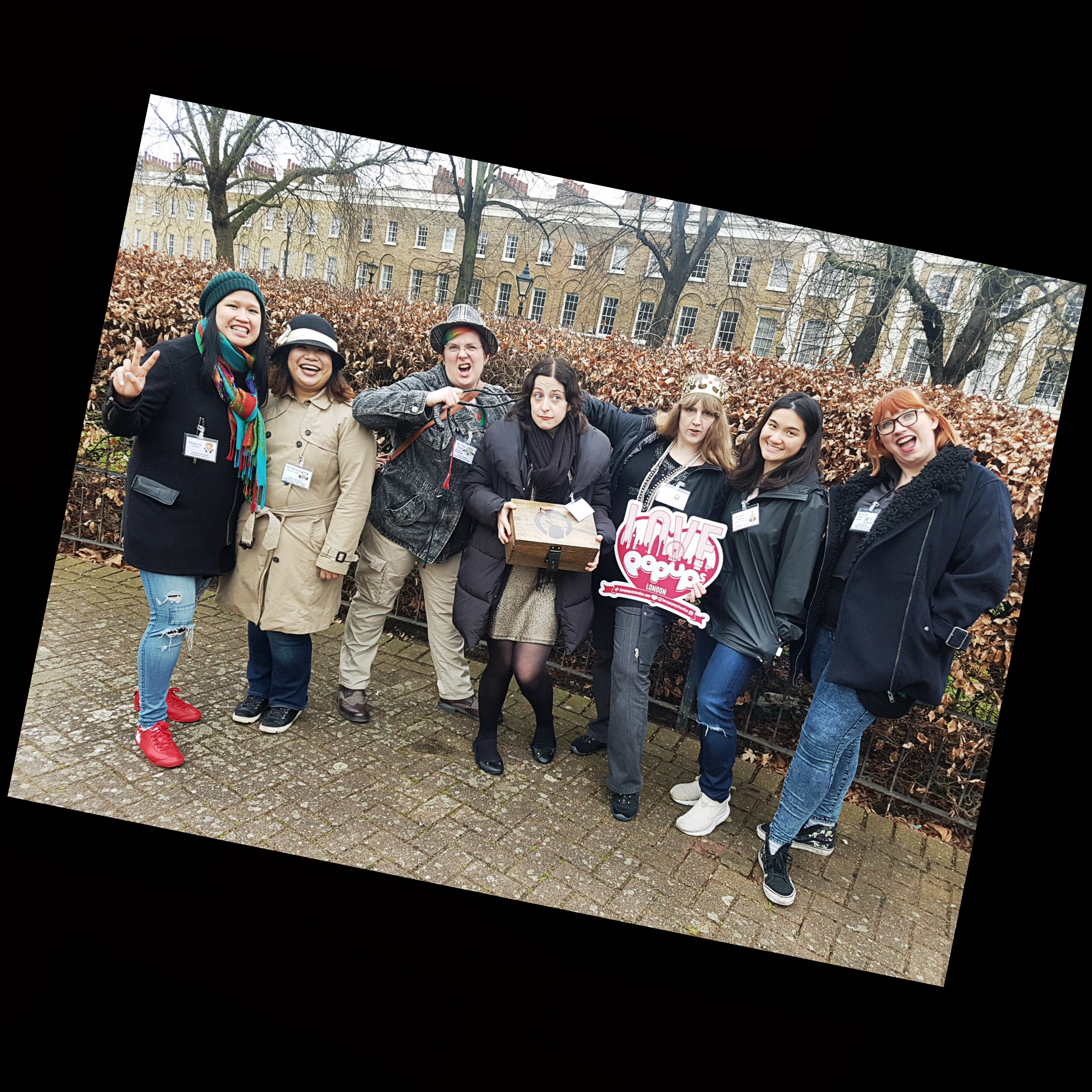 Yesterday I was invited to take part in an event organised by Inkwell Investigations for Love Popups London. The adventure is described on their website thusly:

Solve fiendish puzzles!
Get betrayed by your closest friend!
Die horribly at the hands of angry Romans!
A routine adventure with Professor Inkwell’s time machine goes drastically wrong and the investigators find out that they have already been sent back in time! Now you have sixty minutes to solve the clues left by your future selves to escape the time loop – and figure out which of your team was responsible for sabotaging the time machine in the first place. A game for 3-8 players, ages 7+.

We were all given a new identity to take on for the duration of the game. These are given out beforehand, so you have the chance to dress up appropriately and bring props if you really want to role play for this adventure. This is ab outdoor game, so keep that in mind when you choose your attire for the day.

At the beginning of the game, we were given name badges that give a basic overview of the characters and what their connections to one another are. Unfortunately this name badge also has the “secret” on the back, so it states whether your character is innocent or guilty and what their hidden agenda is. This means you cannot actually wear the name badge as the danger of accidentally flipping it over and exposing your secret is too great. It also means that while they are being handed out, there’s a chance some members of your party might spot who the murderer is, as it’s written in bright red on that characters name badge and might shine through. This could definitely be solved by not placing the secrets on the name badges but handing them out separately, in a small envelope perhaps.

Once we knew the basics of the game, we got started by being given letters written by our future and/or past selves with clues, instructions and riddles on them. While the riddles and puzzles were great fun to work on, there were also A LOT of letters to read that gave information about personal intrigues and hints about who had the means, motive and opportunity for the murder, which we needed to solve at the end.

Many of the clues were also about finding items in the park, which was a really fun element of this game. Some were quite ambiguous though and it seemed faster for us to just try hacking one or two numbers on the combination locks rather than trying to figure out the riddles.

Overall a really fun game with LOTS to do, but a few game play issues. Firstly, the name badges could definitely be done better if they were independent of the secrets, as previously mentioned, and secondly, there is way too much to read for all team members to read every single one of these letters. Which means only one or two members of the team will have the opportunity to read everything and relay the information to the others, if these team members are also under suspicion for murder, the rest of the team will of course not believe their conclusions, which makes solving both the game and the murder investigation more of matter of luck than skill. I almost feel like this game could easily be stretched to twice the playing length to give everyone the chance to receive full information and maybe add a few more elements than just endless reading of letters

Still, we really enjoyed the game and I’d definitely recommend it if you enjoy escape rooms and murder mysteries, or if you always wanted to play a real life version of Cluedo!

Three and a half stars from me, deductions are mostly because of the above mentioned issues that could be fixed without changing the game too much.