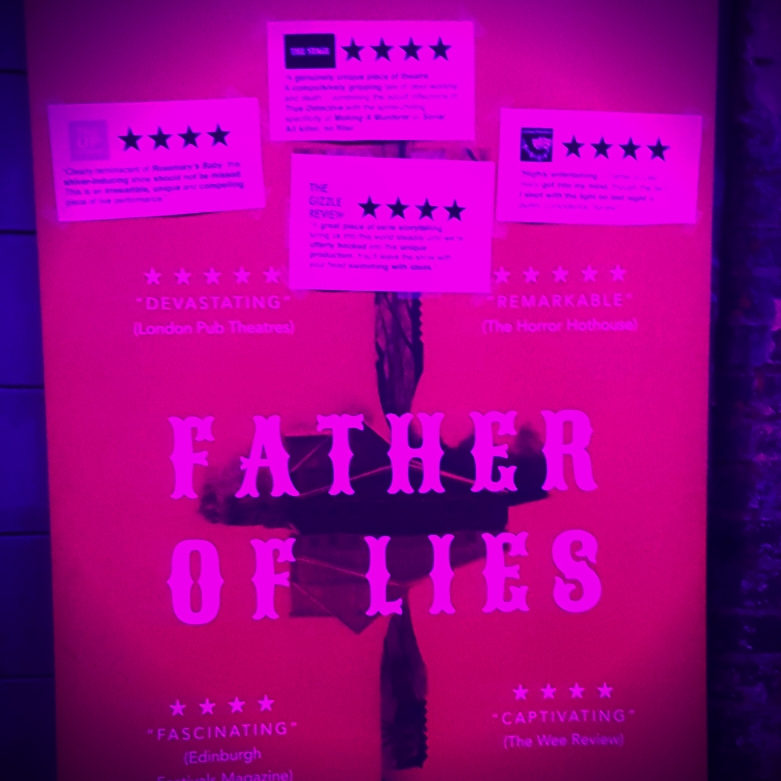 Another trip down to the Vaults, this time to see Father of Lies at the Vaults Festival. As I’m a big fan of true crime and mysterious phenomenon reporting, so this one just sounded like the perfect mix of the two. Tom Worsley and Sasha Roberts present a real life case of murder from 1973. Würzburg, a town in West Germany, is the scene of a grisly crime that is a mystery to this day.

In the dark, candle lit cave of one of the Vaults theatres, we sit in a semi-circle to listen to our two hosts re-create this fascinating story with a slideshow of photographs, dramatised scenes, and excerpts from police reports and true crime books. The story tells of Anselm Neumann, a priest haunted by supernatural visions, his wife, a runaway Jewish woman of questionable origin, and a mysterious supernatural cult.

Tom and Sasha start off setting the mood with a conversation with the audience about supernatural experiences and spirituality, before delving into presenting the curious story of the 1973 murder in Würzburg. With low-key lighting and background sound, these two presenters rely more on their words than big budget effects. As they explore and try to re-create the circumstances of this mystifying unsolved crime while offering competing theories of what actually happened.

This honest and interesting portrait of a crime that is not very well document is quite compelling in this intimate production. While the space could have been used better with a more conventional seating arrangement to avoid the audience having to whip their heads from side to side to follow the two presenters in their scenes, the damp darkness of the Vaults seems to be absolutely perfect for this style of production.

I would have preferred having a chance to have another round of audience discussion at the end rather than being ushered out of the room before having the chance to digest all the information, but other than that I really enjoyed Father Of Lies.