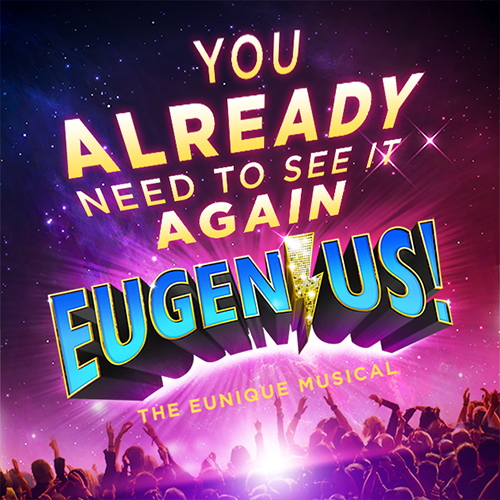 I read about the short run of the brand new Eugenius – The Eunique Musical at the Other Palace theatre and found it to sound super interesting and right up my geeky alley, so of course I grabbed a couple of tickets and a friend and off we went!

Eugenius was written and composed by Ben Adams and Chris Wilkins and premiered at the London Palladium for one night only in 2016, so this short run in early 2018 was only the second chance to see this gem of a new musical.

What struck me first was the set design by Hannah Wolfe, that utilized the small stage perfectly with several platforms and staircases that divided smaller areas while pulling the whole set together to look a bit like the inside of a spaceship. The limited space is definitely utilized extremely well and still gives enough room for everyone to act and dance.

The nerdy Eugene, played with a lot of charm and personality by Liam Forde, loves to write comic books and dreams to make a career with his creation, Tough Man. Of course an unscrupulous business man wants to steal his invention and change it to something completely unrecognizable but more suitable for the paying public, a superhero movie. Eugene isn’t happy about this and doesn’t listen to his friends, but more and more doubts creep his way. Through mysterious circumstances that aren’t actually explained at all (it’s comic book magic, I assume) his creations come to life and complicate the movie shoot through mistaken identities, hilarity ensues.

Brilliantly directed by Ian Talbot, Ian Hughes brings the Evil Lord Hector to life. His trusty sidekick Kevin The Robot, voiced by Mark Hamill, tries its best to keep the chaos at bay, while Eugene’s biggest fan and close friend Janey, played adorably by Laura Baldwin, endeavours to keep Eugene on track and get him to realise that he is being taken advantage of.

With an upbeat soundtrack that’s just so much fun to listen to and makes you want to sing along eventhough you’ve never heard the songs before, and a plethora of puns throughout this silly romp, this is one of the most fun musicals I’ve ever seen. I really hope it gets an extended run, because I definitely do need to see it again already!