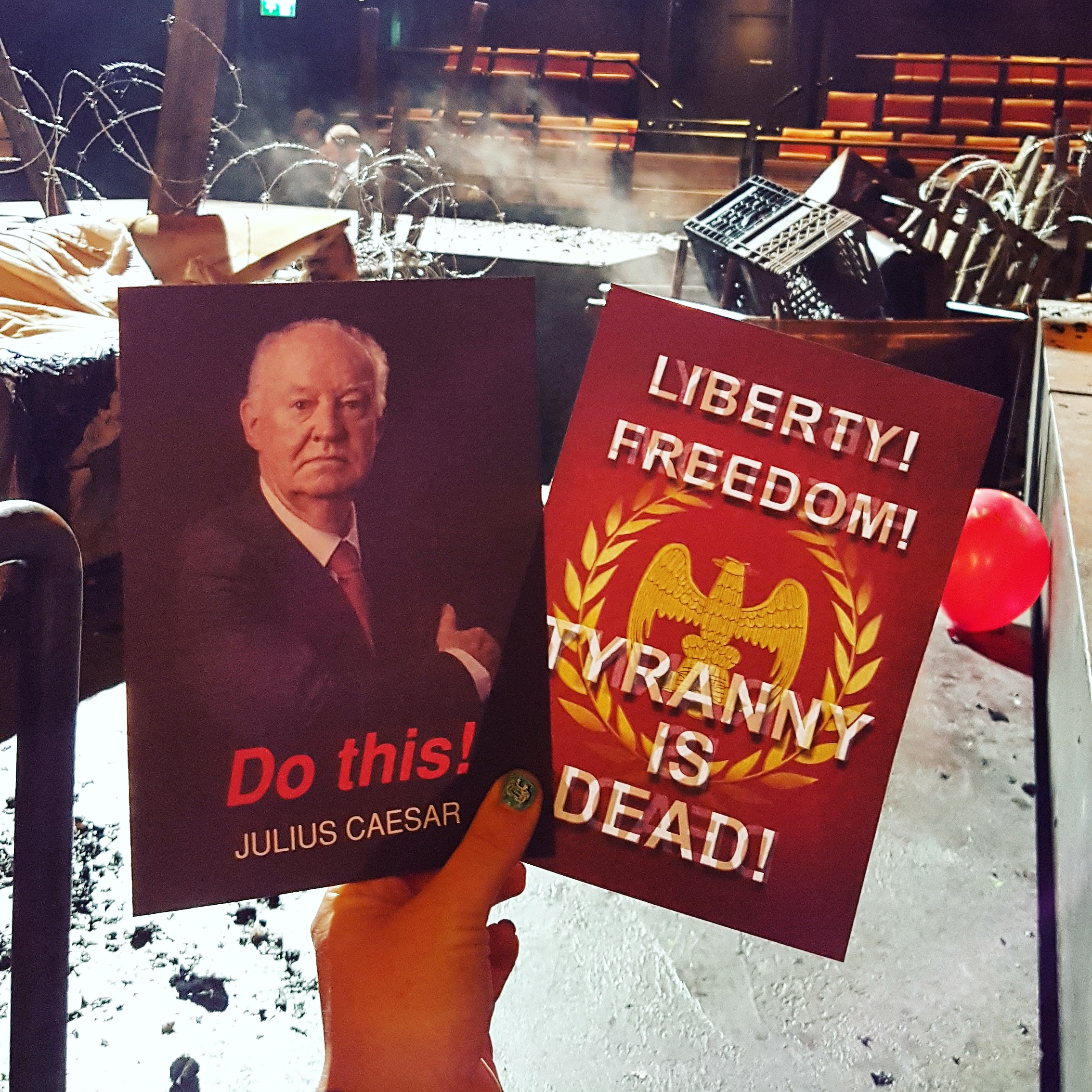 I love immersive theatre, so when I heard about the promenade performances of Julius Caesar at the Bridge Theatre, I just had to grab tickets and see it for myself.

Shakespeare’s popular politics play is always a good one to watch, but this time there is another dimension to it. You have the choice to go for seated tickets, arranged in the round above the arena, to watch the madness from a safe distance, or you can become part of this powerful play by getting a promenade ticket to join the crowd in the arena. I went for the immersive mob experience, and was absolutely not disappointed.

The large, slightly oval-shaped arena is quite empty in the beginning, sporting just a very small street music stage and a selection of vendors hawking red DO THIS hats reminiscent of MAGA hats, giving out flags, or selling refreshments. It genuinely felt like the beginning of a political rally or street party. To while away the wait time until the play started, the ever increasing crowd was treated to an energetic musical performance on the small stage, which slowly led into the opening scene of Julius Caesar.

Nicholas Hytner directs this dynamic feast for the senses, with Ben Whishaw and Michelle Fairley playing coup leaders Brutus and Cassius, David Calder as Caesar and David Morrissey as Mark Antony. Bunny Christie’s production design is absolutely stunning and unlike anything I’ve ever seen before, with platforms rising and falling throughout the arena, actors and ushers rushing to move the hundreds of people in the crowd out of the way. The mob ebbed and flowed around the action on the various stages as Caesar returns to Rome and is subsequently murdered. Spurned on by actors on stage and dotted in the crowd, attendees are encouraged to take it all in and become the cheering mob, the stunned spectators, the fleeing civilians.

As the civil war erupts after Caesar’s assassination we are rushed to the sides to stand by the rough military encampments to witness the fall of the conspirators. The ever-changing stages and scenes keep us moving, one moment you will find yourself standing on the outside surveying the scene, the next second the flow of people carries you to the front of a newly popped up stage. It is a dynamic arrangement and an exhilarating experience.

I don’t think anything about this could have been any better or more intense, this production is a stunner and definitely not to be missed.