A unique staging of Agatha Christie’s Witness For The Prosecution in an actual court room at the London County Hall sounded like just the outing for my birthday, so I grabbed VIP tickets and headed down to witness this amazing play. 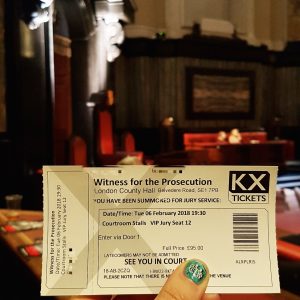 When you enter the court room, it already feels different than the average theatre experience. The old marble walls and wooden benches seem to carry so much history and seriousness, it’s quite stunning. We took our places on the jury benches and were quickly “sworn in” by an actor who spoke way too quietly for everyone to hear her, even in just the small twelve seat area of the jury box. The statements we were asked to read to be sworn in were taped to the small tables in front of our seats, which took away from the professional, serious look and feel a little bit.

If you don’t know this classic story yet, I won’t spoil the ending for you, it’s quite something. Leonard Vole is accused of having murdered a wealthy widow he recently befriended just after she made him the beneficiary of her will. With the death penalty looming, the stakes are high and he is relying on his wife’s testimony to prove his innocence.

The centre of the court room is used as the actual court room, as well as the scene of the lawyer’s office and a few other locations, which is done with just a few props swiftly carried onto the stage. The scene changes work like a well oiled machine and are seamlessly well done. While emotions run high throughout the shocking proceedings, it’s easy to follow the story with solid acting and good projecting of voices. 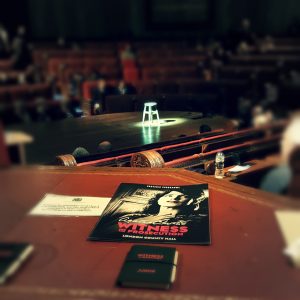 I’m not sure if the VIP boxes were worth the premium cost, but we really enjoyed the experience of having the actors direct many of their speeches at us. The front few rows definitely have to crane their necks throughout the show, so if you go, choose fourth row or higher in the court room to get the best views.

This one is definitely a well done production and absolutely worth seeing in such a different setting. Five out of six rainbow sloths.