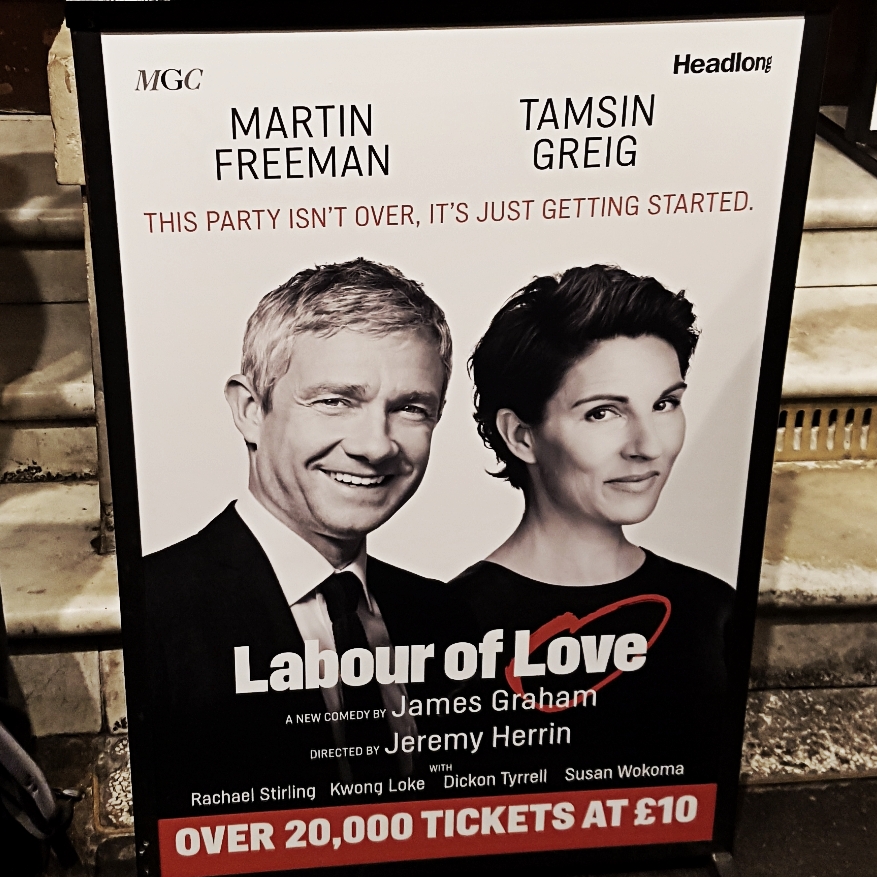 I was really looking forward to seeing Labour Of Love, billed as a political comedy and starring two amazing actors, Martin Freeman and Tamsin Greig. We had to reschedule our tickets as the play opened later than originally planned due to a cast change, but it wasn’t too inconvenient and theatre staff were awesome about rebooking our seats, so no harm done!

When the day of the play finally arrived and we excitedly bounced in our seats, it didn’t take very long to drain all of the energy and anticipation from my body. Unfortunately, this one absolutely doesn’t live up to expectations.

The setting, a Labour party office, offered a lot of opportunities for plot development and great conversations, but none of that unfolded in this slow and drab play. Starting with the end and gradually weaving its way backwards to the time when the main characters first met, this tired trope isn’t even done very well, with news footage displayed on large screens distracting from stage dressing changes, and character introductions that all display extreme stereotypes.

The idealistic young moderate politician, the leftist idealist, the caricature of a corporate lawyer with no scruples, everyone seems ripped straight out of “one-dimensional characters 101”. While there are inserted jokes to make people laugh, they are just that, inserted. None of the laughs seem organicly part of conversations or plot, but rather tacked on to spiff up a boring play. I started dozing off 10 minutes in and had a hard time staying awake, which has never happened to me in the theatre before, and I’ve seen some really shitty plays before.

I can’t fault the actors, they did the best they could with what they were given, they just weren’t given anything substantial. The extremely transparent and predictable plot, the stereotypical characters, this production lacks heart and soul.

However, I have to mention that I absolutely do not like watching rom-coms for exactly the reasons stated above, they just tend to be boring, predictable and chock full of tired tropes. Labour Of Love is definitely a rom-com, so if it’s a genre you enjoy, you might get something out of it.