I got to see the Quentin Dentin Show during its short run at the Tristan Bates Theatre. The show sounded interesting and I’m a sucker for musicals, so I had to check it out. 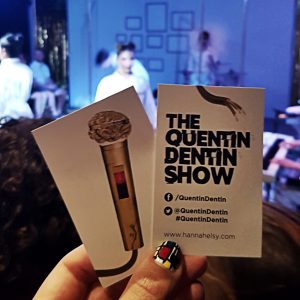 This show was advertised as the Rocky Horror Picture Show for a new generation, and boy was it a ride! Sci-fi meets musical meets absolute insanity!

The Program, whose loyal followers are eager to become the new Quentin Dentin, wants more followers, and Quentin Dentin needs to find them. Partly seeming like a cultist religion, partly a futuristic species, and a big part develish soul-stealing, The Program is portrayed by a disembodied voice, forcefully but cheerfully leading Dentin to fulfil his requirements.

Dentin, played by Luke Lane, does resemble Frank N Furter in many ways, the threateningly charming grin, the mannerisms, the way he narrates and manipulates, thinly veiled insanity overplayed by ruthless enthusiasm. The Followers seem creepily mechanical in their motions and actions, almost devoid of humanity. While the “normal couple” who get sucked into this hilarious faustian horror story are befuddled, confused, their emotions and desires laid bare cruelly in front of the audience.

The first half is very upbeat but with a distinctly dystopian undertone, while the second half gets much darker, more threatening, but still in a cheerful way with a bright grin. 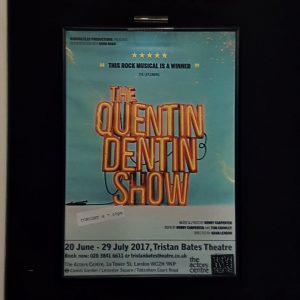 Unfortunately the music was a bit overbearingly loud at times, so I had to dig out my ear plugs, which I don’t often do in the theatre. However, the surrealistic atmosphere and thought provoking depth, the cheerful songs and ridiculous themes, the brightness and loudness was just my thing and I absolutely loved the show! Five out of six rainbow sloths!