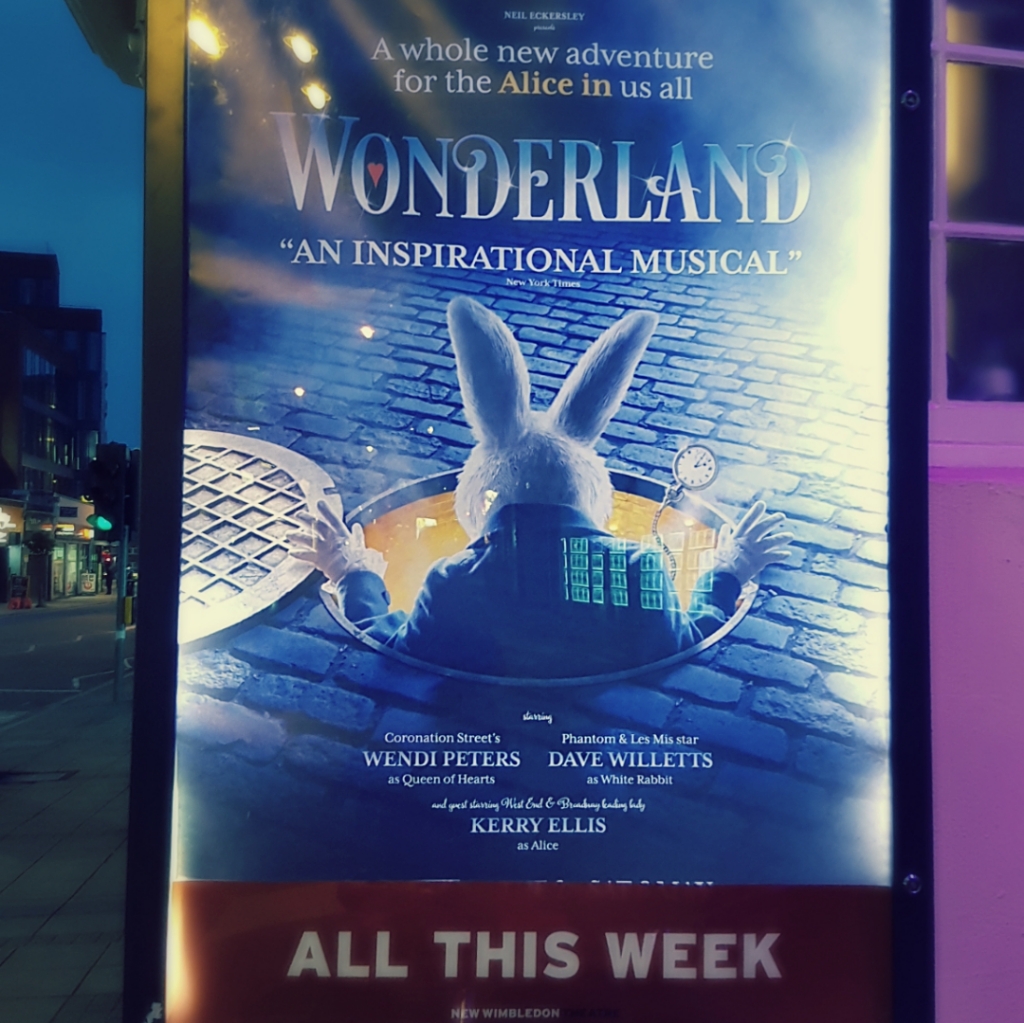 I just had to go to the UK premier tour of the new musical Wonderland, a new interpretation of the Lewis Carrol classic Alice In Wonderland. As I love Alice in Wonderland, musicals and modern interpretations of classics, there’s no way I could miss this!

I’ve been to the New Wimbledon theatre a few times before, but this time was different, mainly because a large amount of the patrons were incredibly late to get to their seats, some still shuffling in as they finally started the show ten minutes late. The same happened after interval, but the audience seemed to make up for their poor time management with being incredibly enthusiastic.

Wonderland is a modern interpretation with a whole new plot line and updated songs, Alice is a fourty year old single mom who still pines after her abusive ex-husband, who seems to have worn down her confidence and left her an emotional wreck. On her 40th birthday, five years after their relationship ended, he remarries and Alice tumbles down a negative spiral after losing her car, her job, and her hope for getting back together with her ex all in one day. Alice’s teenage daughter, Ellie, resents her mother’s lack of self esteem and tries to push against it while their downstairs neighbour Jack quietly pines for Alice but never dares to even speak to her. Suddenly a white rabbit appears, Ellie chases it and disappears into an out-of-order lift. Alice and Jack follow the rabbit to try to rescue Ellie and all three are transported to Wonderland, where they learn to be who they’ve always been too afraid to be with the help of a colourful cast of familiar characters.

The cast definitely made this musical, every single one impersonating their characters with conviction and infectious joyfulness. Kerry Ellis breathed life into the bland character of Alice and made even the less intense songs gorgeously wonderful. Jack, played by Stephen Webb, seemed like a very bumbling, repressed character, but Webb’s enthusiasm and his transformation into a cheesy white knight made him stand out. Wendi Peters absolutely stole the show as the Queen of Hearts, with an amazingly strong singing voice and hilarious gesturing, she only had a very minor part and I wish we’d have seen more of her on stage!

Another absolute stand-out character was Dominic Owen’s Cheshire Cat, my absolute favourite of the night, perfectly balancing between creepy and silly, speaking in riddles and always proclaiming “I’m just a cat” while giving impressive physical performances. Kayi Ushe’s Caterpillar was delightfully suave with all the swagger and the other characters added so much to the musical, it was at times hard to choose which part of the stage to focus on.