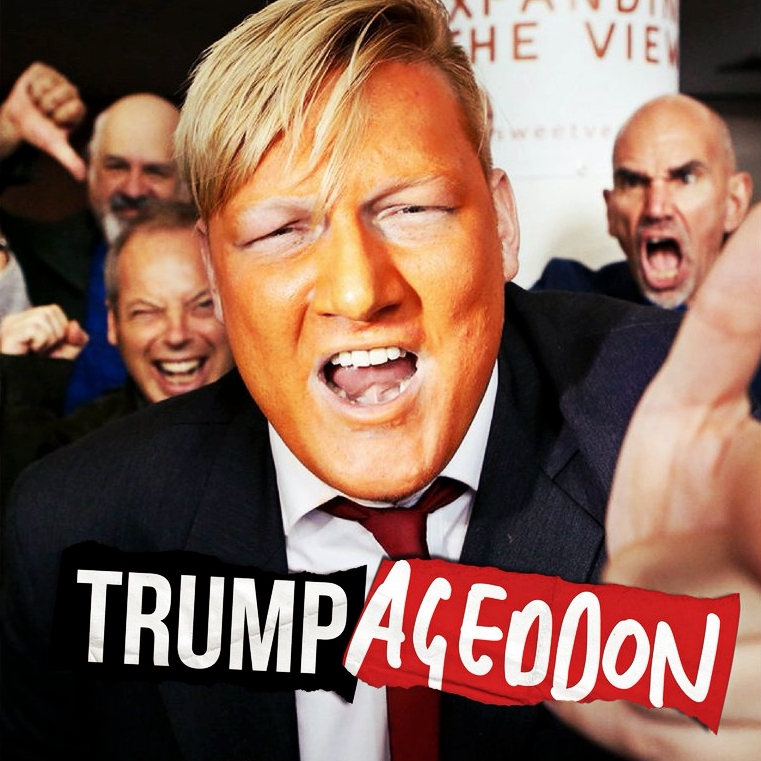 Simon Jay’s one-man-show Trumpageddon sounded too good to pass up, so on a Sunday afternoon I wandered up to Angel and promptly stumbled over the curb and landed flat on my face. Or rather my knees, to be more exact. Great start to the evening, I thought. Ruined my leggings and scraped both my knees open. Brilliant.

However, I headed to the King’s Head for a drink or two before the show. And some rest for my battered knees of course.

Once the doors to the small theatre opened, we grabbed our seats and eagerly awaited the beginning of Trumpageddon.

Shortly after, Simon Jay took the stage accompanied by a raucous tune and immediately went full Trump. With his suit, bleach blond hair and orange face paint, he was a near perfect embodiment of the loud mouth president. Intonation, vernacular and gestures a carbon copy of official speeches by the great orange tyrant.

The show is a mix of stand-up and improv, relying much on audience participation. Jay perfectly mirrored Trump’s toxic attitudes to correctness, social empathy and of course women. The audience really went with it, presenting questions and commentary as if addressing the politician himself, while Jay impersonated the media-hungry Trump to the T.

As this show relies so much on the audience, it can be a bit of a hit and miss, but the performer knew exactly how to play participants and rouse the crowd.

Many laughs were had and we left satisfied with a hilariously politically incorrect show.