Holi! Who doesn’t love the brightness and positive atmosphere this festival of colours brings with it! I heard about Holi In The City through Love Pop-Ups London and wanted to try it with a group of friends.

When we arrived at Cinnamon Kitchen, I realised that this was more commercial entertainment than spring festival. Of course I should have expected that, being a ticketed event on a commercial company’s premises, but somehow I was still hoping for more. 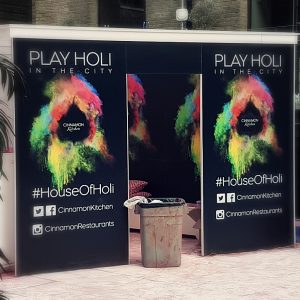 We were handed thin coveralls, seemingly way too thin to do any good and partially ripped already, as well as shoe covers that didn’t quite cover our shoes. As a result, we didn’t feel well prepared at all. We were also made to wait quite a while beforehand with staff asking several times if we wanted to purchase drinks.

Once it was finally time to get our holi on, we were instructed only to use colours the way they were pre-selected, but then it was go-time.

As most people came in small-ish groups, it seemed that there wasn’t a lot of intermingling between the groups, which I found somewhat disappointing. 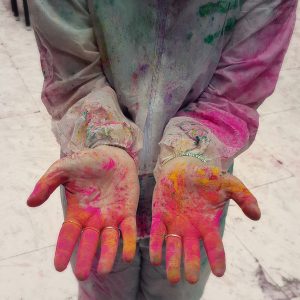 We did end up being entirely covered in colourful powders though, especially through the thin coveralls, it was quite the clean-up after!

While we all had fun, it still seemed more industrial than it should have and the whole “festival” part seemed to be missing. It could have definitely been done better, though I suppose it’s difficult to organise this for so many people without making it an industrial effort.

I’m rating this one three out of six rainbow sloths.