I am not very familiar with the whole panto culture, so decided to give the filthiest panto in town a shot. I’m generally not a fan of mindless comedy and stereotypical tropes, so I was skeptical. 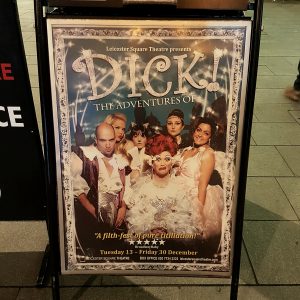 The story of Dick takes place in Soho-ho and pits the heroes against the evil queen who wants to gentrify the area, which generally sounds like a good idea, but the flat tropes and offensive stereotypes rubbed me, and a few other audience members, the wrong way at times. Filthy humour can be great, if done right. The harsh vernacular had the potential to lead to a side splitting comedy fest, but the story kept degrading and stereotyping trans people, lesbians, people of colour and a variety of other minorities in a blunt and dehumanizing fashion. If this is what panto is all about, panto is certainly not for me. 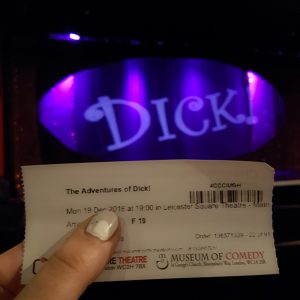 The cast tried hard to entertain and seemed quite into it. Big voices and big gestures, bright colours and so much glitter, which was definitely fun. But the crudeness was directed at the wrong targets and as such just wasn’t for me.

I’m rating this one two and a half out of six rainbow sloths.