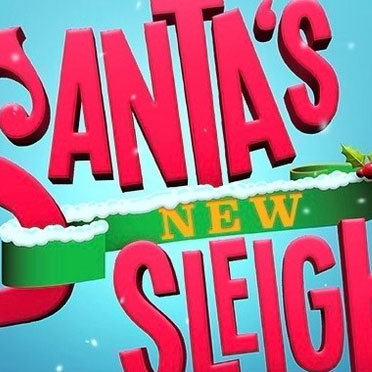 In my daytime life, I am a nanny for a 3yr old girl. I was invited to take her and a friend of hers (as well as another nanny and a mommy) to see Santa’s New Sleigh, a small Christmas performance upstairs at the Arts Theatre. The children were very excited, doors opened quite late so the standing around and waiting made them quite unruly to begin with, but once we had settled into front row seats, they were eager to see the show.

We were the only guests in attendance, so it was a very private performance. Both actors were full of energy and excitement, despite the small audience size. There were a lot of audience participation cues and we did our best to fill in and get the children to take part.

The story was a simple one, two elves needed to get Santa’s new sleigh ready in record time as they’d procrastinated for too long. One was a bumbling, silly elf, the other a more responsible but a bit clueless.

Together they did their best to create chaos, entertain the children and cobble together a new vehicle for the big guy! The children were super into it and especially loved Sprocket, the cheeky, lazy elf. All the adults were quite entertained too, one of them even remarked how this show was so much better than The Tiger Who Came To Tea, which she had seen a few months prior.

The finale for this colourful performance was of course a visit from Santa who even had gifts for all the children.

Everyone left with a big smile on their face, I would definitely recommend this show for children and silly adults.