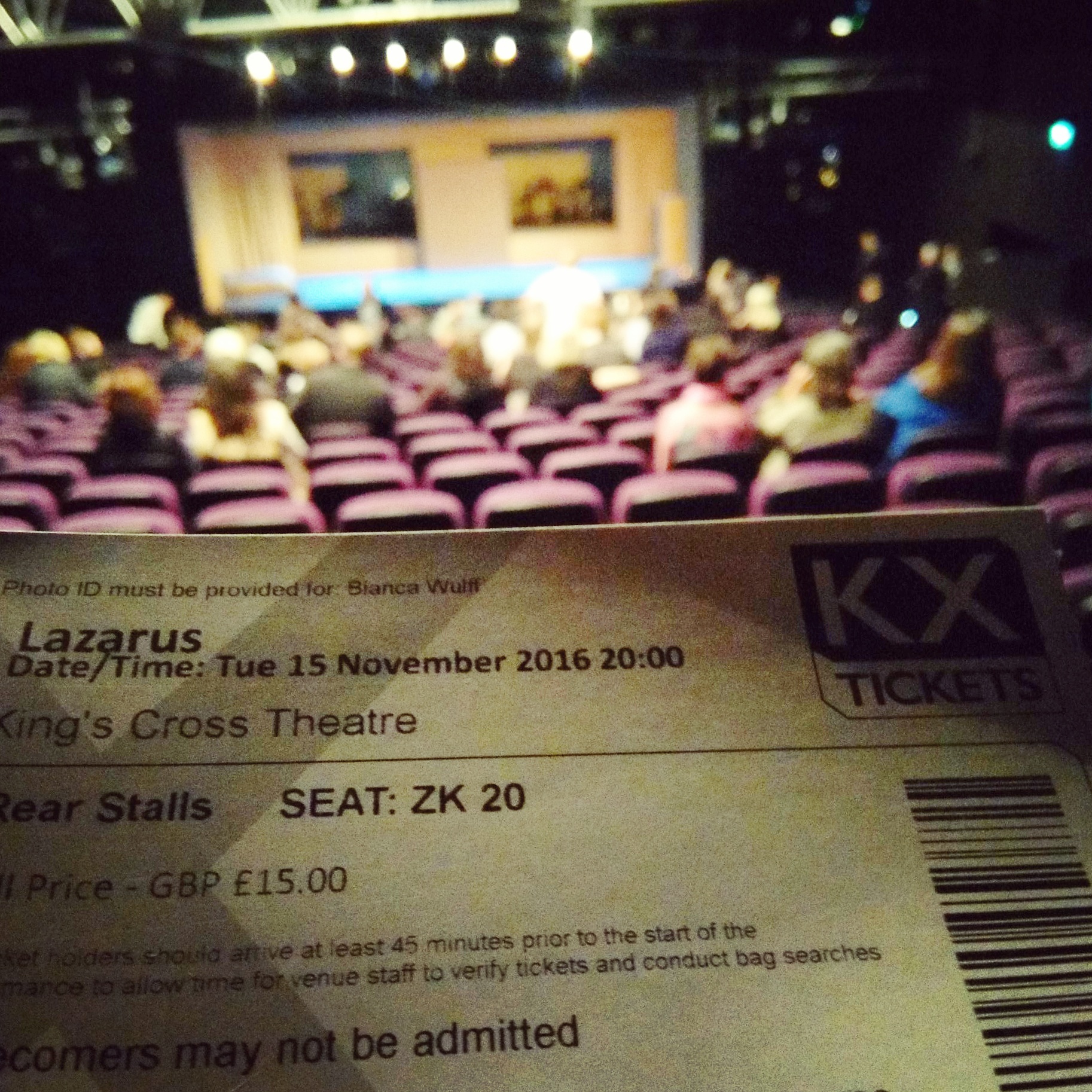 As a casual Bowie fan, I jumped at the opportunity to see Lazarus when it played in London in a purpose built temporary pop-up theatre. We got seats at the back of the stalls and were very excited to see the show.

Michael C Hall is starring as the main character and the musical is a loose continuation of The Man Who Fell To Earth. There is a live band to accompany the actors and several screen elements.

As a purpose built theatre, you’d think they’d have planned everything to maximise enjoyment of the performance for everyone, you’d be wrong. From the beginning I thought this would not be the best view as the incline of the rows of seats was not steep enough. Unfortunately, the bottom half of the stage was completely invisible to us due to other patrons sitting in the way. At the beginning of the performance I still thought this wouldn’t be much of an issue, but as the story unfolded, a lot of the action happened on the floor of the stage, and as such was not visible to us.

From what I heard from other theatre goers, only the first five or so rows had a good view of the stage.

Another negative point, we were sitting quite far back, the tented theatre backs onto the Kings Cross theatre and the thin walls of both theatres meant we could hear the music and singing from the neighbouring theatre almost as loud and clear as the sounds wafting up from the stage. This was a huge distraction and ruined many of the musical moments completely.

The actors on stage were great amd especially Michael C Hall blew me away with how much he sounded like Bowie. The live band was unfortunately so loud, the vocals were often indistinguishable. Overall, the sound in this so-called purpose built theatre was atrocious.

The story was very art-nuveau amd quite a bit too pretentious for my taste. Video installations showing the actors acting the exact same scene as they did on stage were terribly distracting as they weren’t synched to whay was actually going on. The screens were much more visible for us than the actual stage, but neither the movements nor the lip movements matched up and everything just became a gooey mess.

The show ran for three hours without an interval, which didn’t make sense at all as the format seemed to adhere pretty well to usual musicals and a short break would have done a world of good. Maybe they were afraid people would leave if given the chance to get up and think about the play for a moment. If there had been an interval, I may have actually not returned for the second half.

If you’re into lofty modern art or just really want to see Bowie in concert again or get really really high before seeing it, you might actually enjoy Lazarus. I didn’t. I’m giving one star purely for Michael C Hall’s voice.