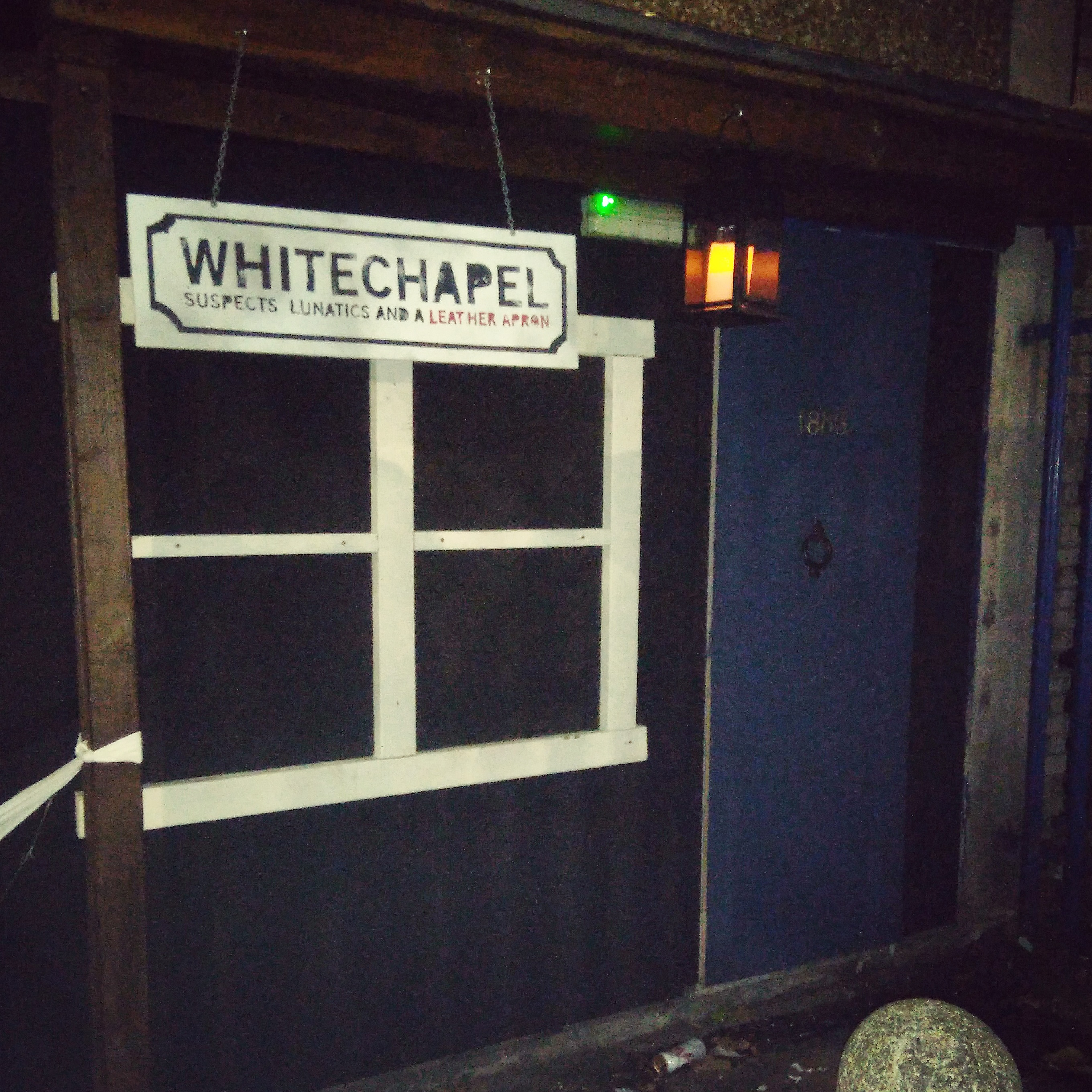 In the weeks before Halloween, I like to check out creepy and spooky events throughout London, especially immersive theatre. When I heard about Whitechapel 1888, an immersive experience set on the infamous double murder night of Jack the Ripper’s reign of terror, I just had to give it a go.

I struggled trying to find the entrance, which is quite funny as I’ve been to the location thrice before but have always used the main entrance rather than this side entrance. It’s quite well marked and the address isn’t hard to find at all.

Be warned, there are no toilet facilities available to patrons here, which turned out to be a huge inconvenience for many.

Before entering London of the late 1880s, you are divided into groups randomly, couples and groups were at times split up into different colour-coded groups. Each of these groupings will have a slightly different experience as some are given jobs and roles to start with, I believe. I was sorted into the first group to enter the building.

We were given a short run-down, handed over our jackets and bags at their coat check and were led into the doctor’s office to start our adventure. The location is quite amazing as there’s a full old-timey town built inside a large warehouse-like space, complete with town square, church, pub, police station and various other buildings.

At first we were just introduced to the basic circumstances we, as newcomers to this dreadful part and time of London, should expect; some introductions to important characters were made and immediately the action started. Some people of our group were taken aside and given jobs while most of us had no idea what to do next. I tried interacting with some of the characters, but it felt very much like talking to generic NPCs in a badly written storyline.

From what I saw, a few other people seemed to be quite involved in the goings on while there were also many of us just randomly wandering around and exploring because we didn’t know what else to do. The space was just too vast to catch everything happening and while participants who were assigned roles seemed to always know where to be, many of us were left hanging.

I ended up chatting to a handful of other wanderers and just exploring the venue as the plot completely passed us by and interactions with characters seemed to have no effect on the plot or our experience in any way.

Suddenly we were whisked into a group of people who were led down stairs into a dingy corner with a short scene at the end and, without any warning, we were shoved out the door to pick up our things and leave.

I still don’t know what exactly the plot was, apart from the obvious historic story, because I always seemed to be where the action wasn’t. The actors did a great job portraying their characters and it did feel like an immersive location, the storyline and interactions with patrons was just too disjointed and loose. I’m really not the shy bystander kind of participant, but simply wasn’t able to find a way to feel involved in the happenings around me, it felt like I was always one step behind.

This event definitely has potential, but in the iteration I saw it, it was simply frustrating and disappointing. I’m giving a few points for venue, costumes, and actors; I do believe some participants with assigned roles got to enjoy this immersive experience, but the group I was in just felt like “extras” who were left to wander with no purpose.