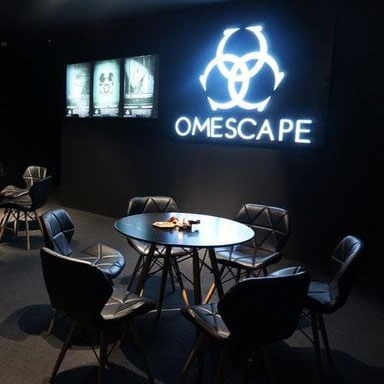 This new escape room company, Omescape, has it all figured out!

They’re offering three different rooms at different difficulty levels. The second room we tried here was The Joker’s Asylum, the most difficult room. The difficulty prediction seems pretty dead on, so make sure you know what you’re getting into.

We once again got the introduction, but the staff was much more secure and professional this time. The difference a month can make! This time we were immediately split into two groups and led off in different directions.

Communication is super important in this room, so make sure you have good communicators on both sides of the team. The Joker’s Asylum definitely follows a storyline, albeit one made up by a twisted mind. There are many clues hidden throughout each and every puzzle, which will eventually come together to help you unlock the exit door.

It’s relatively dark in several of the rooms in the asylum and can be quite creepy at times, but there are no jump scares or similar effects, which makes the room appropriate for everyone. I’d definitely recommend this one for people with escape room experience though, as it is quite tricky and elaborate.