Being in lockdown due to the corona virus pandemic, I thought I’d use the time to work on my backlog of shows I never got around to review back when I actually saw them. I just don’t always have the time to write reviews right away and sometimes they just fall into an eternal backlog that I am now striving to work through! I actually viewed this production on 10 September 2018 and am writing the review with my theatre notes written during and after the performance.

I was very excited to be able to see Little Shop Of Horrors at the Regent’s Park Open Air Theatre, as the musical was one of my favourites way back when. I’ve loved so many productions at the Open Air Theatre, so was very much looking forward to see what they would do with this traditional gem of a show.

The gorgeous stage design is reminiscent of the 1986 film version, with a good dose of garish camp and over-the-top comic-esque American fantasy sprinkled on top. With bright colours and dreary skylines, it’s the perfect backdrop for this fun little story. The stage is surrounded by scaled down buildings, that visualize the slum-like surroundings of the flower shop in the centre of the story very well. The lighting gives everything a surreal vibe, evocative of old American B-movies. 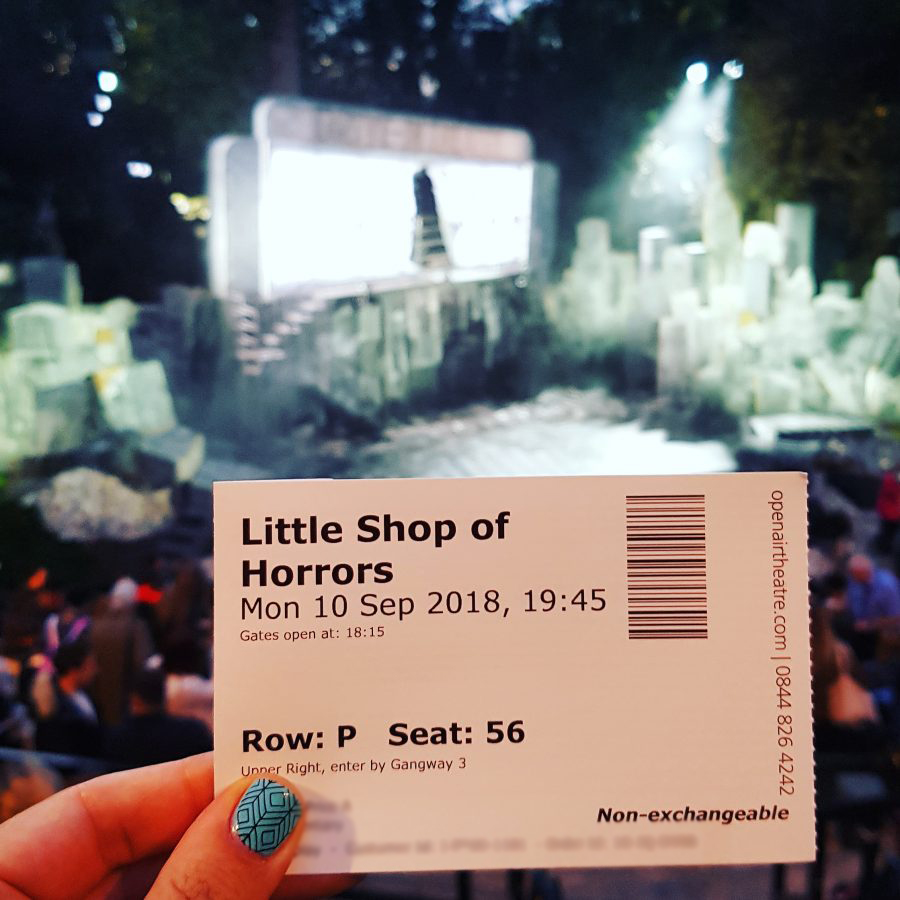 With all characters dressed in incredibly bright, whimsical costumes, and a very energetic choreography, it feels almost threateningly upbeat. Like that feeling of dread you get in your stomach just before something goes horribly wrong. It’s all very over-the-top and American kitsch, which I absolutely loved on this production. The main characters of Seymour, Audrey, and Audrey’s abusive boyfriend seem heavier than usual, almost like charicatures of the more toned-down film versions, which drives home the point of how bleak some of their relationships really are, while still maintaining a sense of whimsy.

Instead of using an oversized puppet, Audrey Two is played by American drag queen Vicky Vox, who owns the entire stage and production from the very first moment she appears on stage! A very strong and bright performance I won’t easily forget. The second act is tinged by a post-apocalyptic aesthetic, with the broken-apart stage tinged in garish green and humongous tentacles reaching up into the sky. A feast for the senses from the ultra-bright colours and sharp edges to the beautiful and strong musical pieces belted into the audience.

And absolutely stunning production that was one of my favourites of the year, this re-imagining of Little Shop Of Horrors gets everything right. It’s just as camp and kitsch as it needs to be, leaving a strong footprint in my brain that won’t fade for a while yet. If this production ever returns, I will definitely be right back to see it again, it was absolutely fantastic! Five and a half out of six rainbow sloths from me.