Being in lockdown due to the corona virus pandemic, I thought I’d use the time to work on my backlog of shows I never got around to review back when I actually saw them. I just don’t always have the time to write reviews right away and sometimes they just fall into an eternal backlog that I am now striving to work through! I actually viewed this production on 09 September 2018 and am writing the review with my theatre notes written during and after the performance.

Sh*tfaced Showtime returned with a beautifully bonkers production of Oliver With A Twist. As always with this brand, the show features one actor who has been drinking generously for four hours prior to the start of the show. They are also provided with alcoholic beverages throughout the one hour performance. I got to see their shortened and updated musical version of Oliver Twist.

The troupe also features a “handler” for the drunk cast member, who makes sure they neither get out of hand, nor sober up too much. To help along, two instruments are handed out to random audience members prior to the show starting, which can be used (one time only) to prompt the sozzled actor to take ONE MORE DRINK immediately. Of course one audience member also becomes the designated vomit bucket holder, in case of emergencies. Luckily I sat far enough back to not be appointed to any of these prestigious roles!

It quickly became apparent that for our performance, it was the titular role of Oliver Twist who has been imbibing heavily before the show. What proceeded was a hilarious mish-mash of giggle-fits, forgotten lines and lyrics, improvised dance routines, the insertion of way more Britney Spears references than Oliver Twist usually has, and a few close calls with overt sexual references. 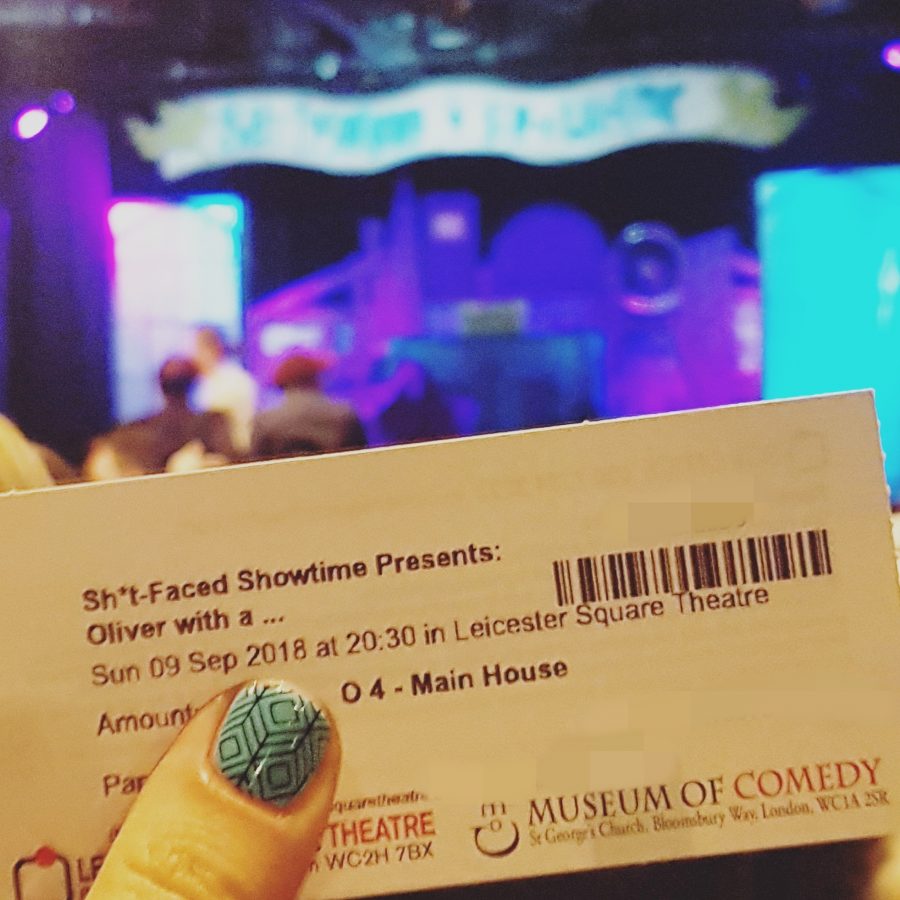 I always admire how this group of actors manages to just roll with whatever is thrown at them by the drunk actor, and usually manage to get the show back on track if it veers a little too far off. This is entertainment on a whole new level! While everyone else knows their roles and lines very well, the sh*tfaced cast member can throw everything off in a second and everyone scrambles to get things back on track without shutting down the hilarity.

It was an absolutely brilliant performance that could easily have gone on for another half hour for my tastes! What I like best about this company is that the re-watch value is so high, because no two shows are the same. You can watch the same prodution over and over again without ever knowing what to expect for the next one.

Fantastic concept brilliantly played out, I definitely recommend any Sh*tfaced Showtime shows. Five out of six rainbow sloths from me!