On Thursday night, the lovely Joanne from Love PopUps London invited me along to experience Gingerline’s TV Dinners, a brand new immersive dining concept. TV Dinners is set up like a cheesy 90s game show in which contestants fight for extra food and the glory of winning.

I had no idea what to expect, really. But we made our way down to Bond Street to the Gingerline Studio to find out what this event was all about. We ended up on the blue team, the Ice Cold Crew, with eight other contestants and were excited to find out how this ridiculous show worked. 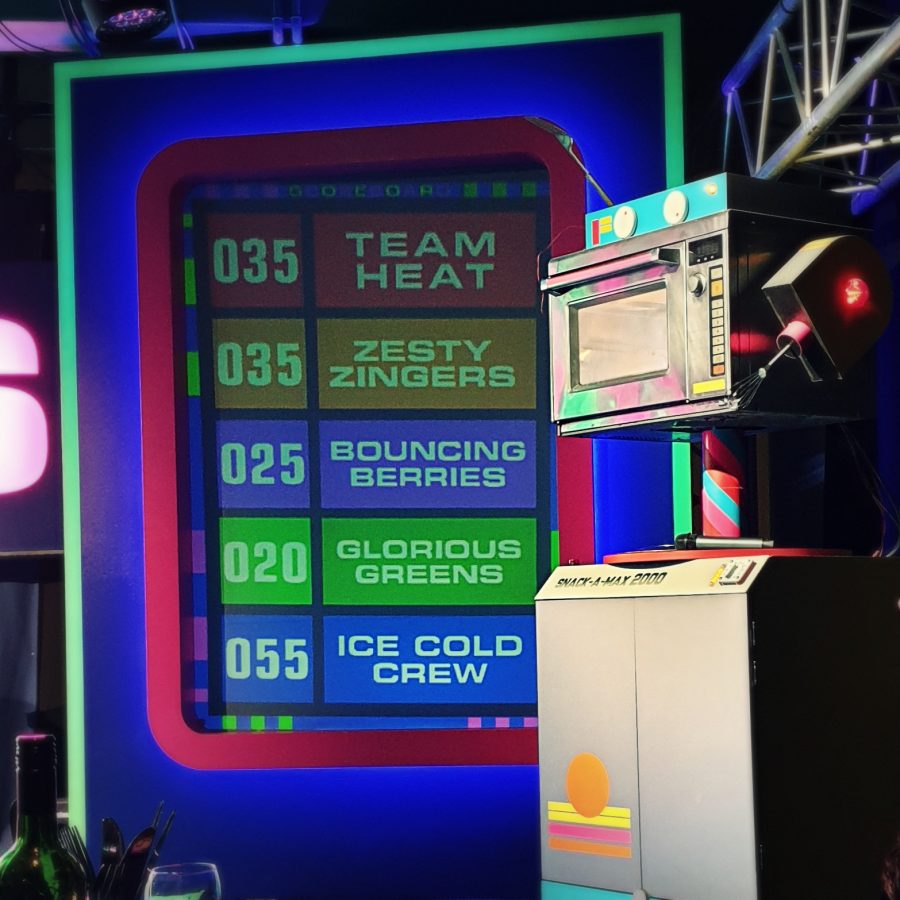 The snack-a-max 2000 featured prominently on this “live” show that did indeed look like a weird day-time TV show right from the nineties, including the flashy host couple Midge and Madge. With a lot of pizzazz and cheesy jokes, they explained the basics of the show. In four rounds, the five teams would battle it out to determine the winning foodies who would win a bag of bagels. Along the way, we would be able to win little extra food portions, and in the last round, the winning team got do decide which dessert to get for their whole table.

Each team can have up to 12 people, and each round requires three contestants. Thus, every team member would have a chance to participate in one round of the game. As there were only ten of us at our table, two people got to compete twice. We were given a basic idea of what each round would require and asked to decide on the respective contestants before it all started, then we were off to an evening of silly entertainment and decious food, because Everyone’s A Winner At Tv Dinners! 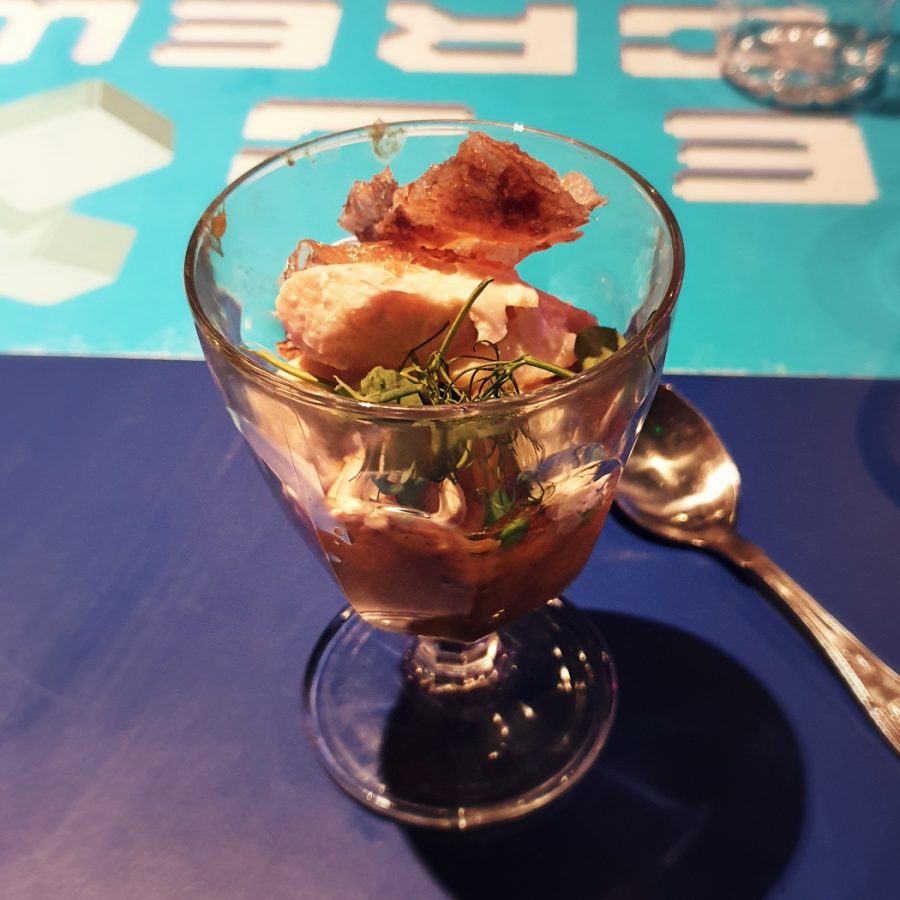 After round one we were in second place, fairing quite well at a round of tasting and smelling foods. Midge and Madge are brilliant hosts who hype up the audience and work hard at getting everyone to understand and stick to the rules while creating a holiday party atmosphere of ridiculous hilarity. As a reward for finishing round one, we are treated to smoked haddock with bengali cholar dal, rice crackers, a quail’s egg, and coriander cremolata. As someone who’s not too keen on fish, I still really enjoyed the dish being well balanced and lightly spiced.

Round two was the activity round! In this round, we were not only able to win points, but also steal points from other teams. After a few mishaps with overzealous contestants, the game finally started and everyone was cheering on their own team. This round of active madness catapulted our blue team to the top of the leader board and we won ourselves a little treat. Along with our second course, we were given some extra treats to celebrate our win! 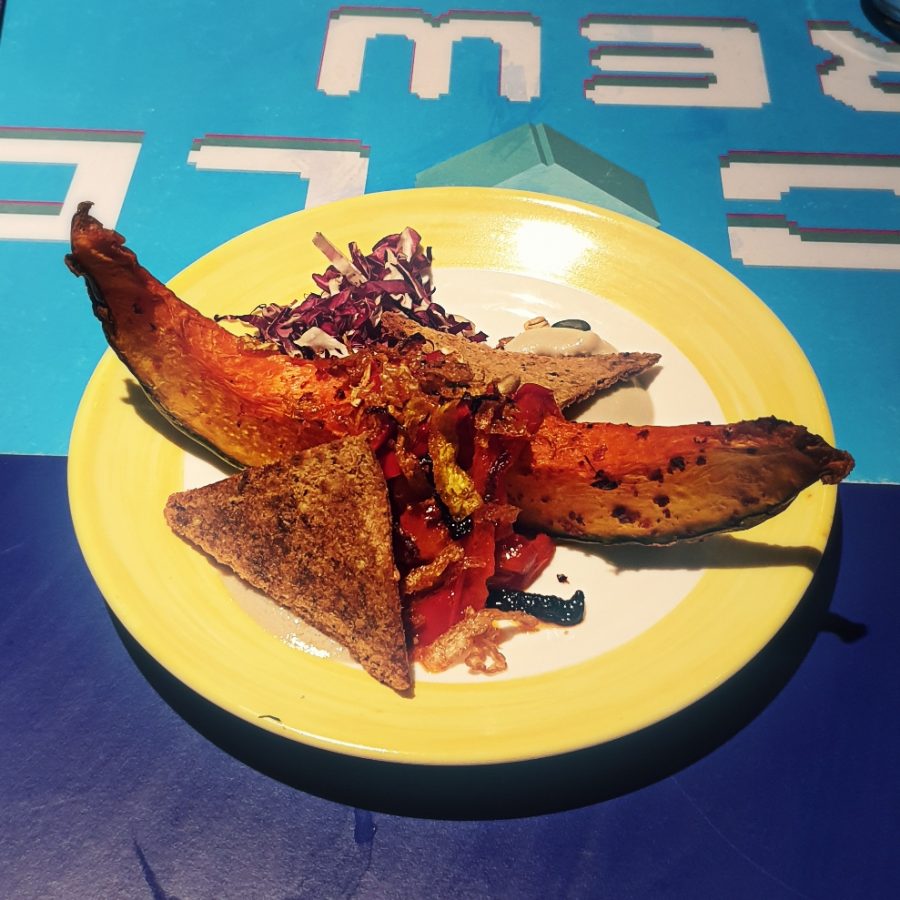 The second course consisted of spiced pumpkin with red peppers, racidio and croutons. I absolutely loved the pumpkin, it was delicious and warmly spiced and worked really well with the marinated peppers and crunchy croutons. A very well balanced dish.

It was now time for round three, the first round I got to participate in as a contestant! We were tasked with figuring out the ingredients for a specific dish chosen for us, and then shopping for those ingredients on stage with all other contestants in a supermarket sweep style setup. It was hilarious and action packed and so much fun, though we couldn’t find everything we had added to our shopping list, so just ended up improvising a little! It worked out well though as we again won the bonus treat and got the most points in the round, solidifying our lead! 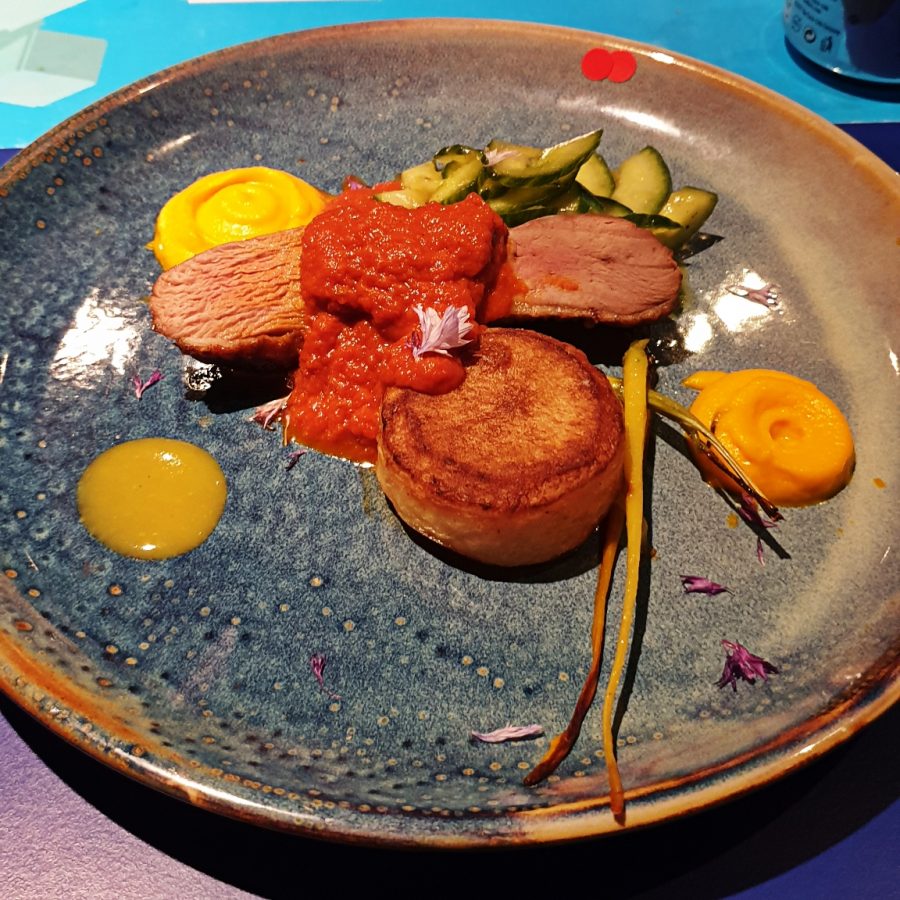 The main course presented after round three was Duck A L’orange. I wasn’t too keen on the sauce I was given. Due to food intolerances I couldn’t have the actual gravy the duck should have come with, and the tomato based sauce it was smothered with instead really didn’t work with the dish AT ALL. I ended up scraping it all off as best I could and eating the duck without any sauce. The carrot and orange puree tasted oddly like baby food and wasn’t too my taste either. I did love the potato fondant and the cucumber salad though, they were really well made.

For the final round, I got to go up a second time, along with Joanne this time. This was the foodie knowledge round in which we had the chance to decide which of the five desserts offered our team would get to enjoy. After enjoying the buzzers a little too much, we settled into the round and answered the first question correctly to win our team the hotly anticipated banoffee pie! We fared quite well throughout the round and ended up in the tie breaker challenge with the purple team. 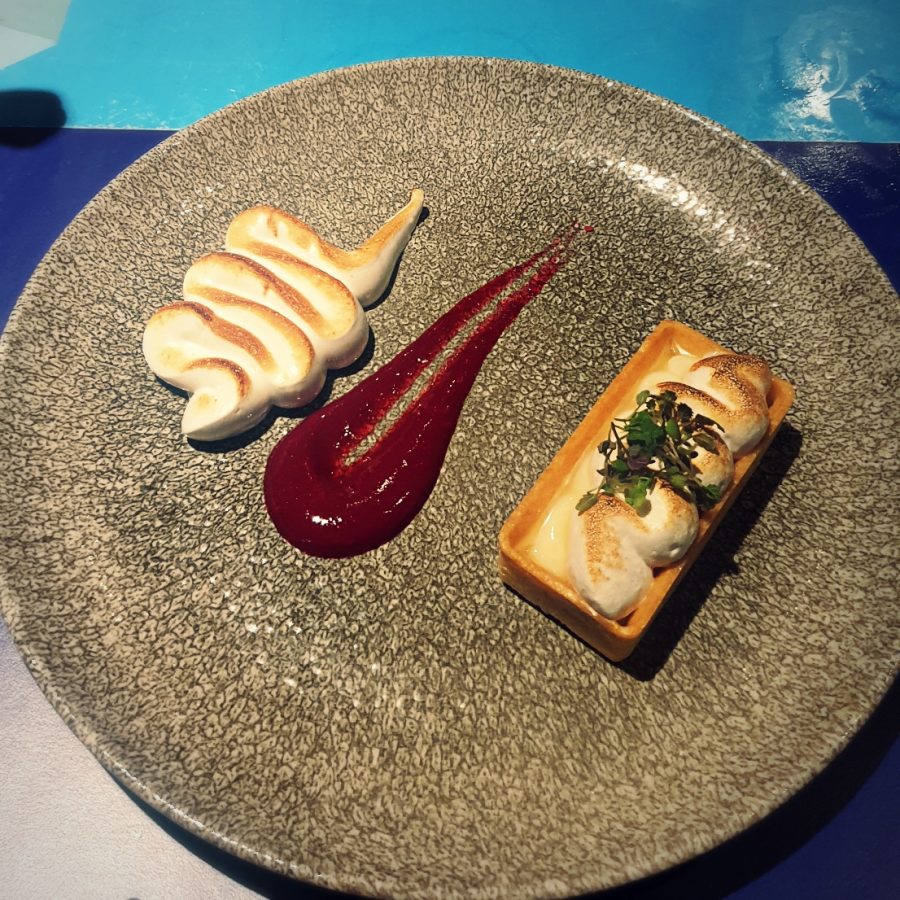 I wasn’t given the banoffee pie due to food intolerances again (which doesn’t make sense really, as banoffee pie doesn’t need to be made with alcohol, so I should have been able to have the dessert we actually won, but I love lemon meringue pie, so I wasn’t too disappointed) but we all enjoyed our desserts despite losing the last challenge.

Our team still had the most points and we won two of the three extra treats, so we were extremely happy with our performance at this insane game show. 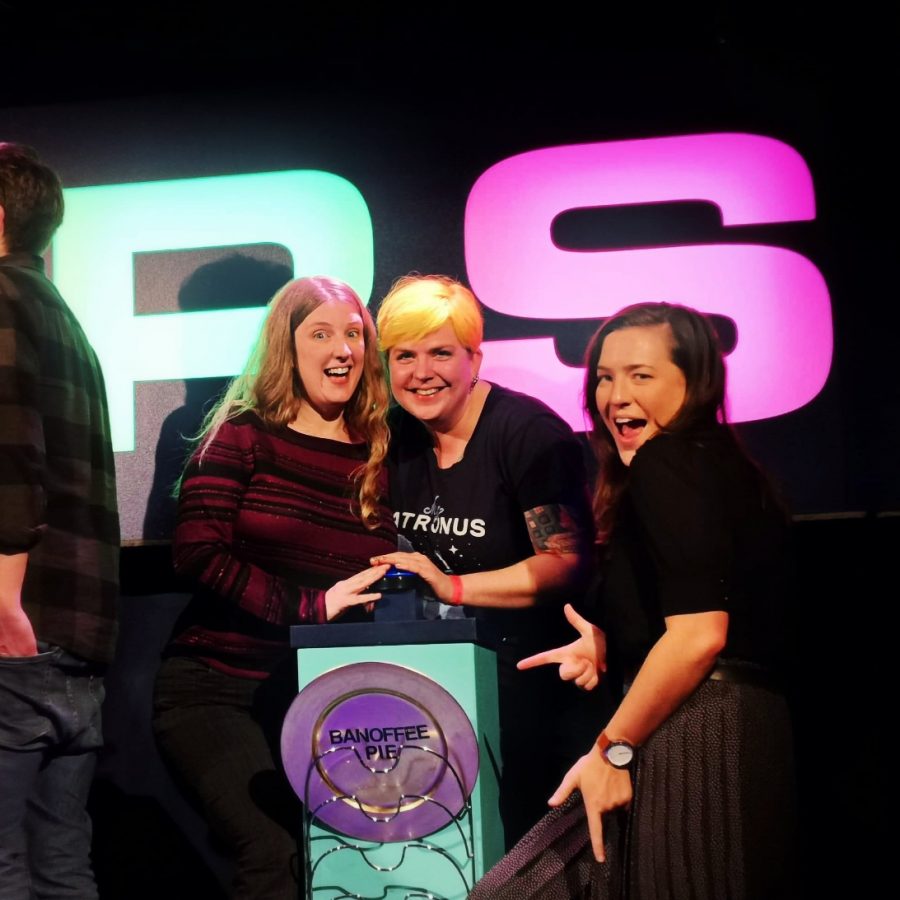 Overall, it was a brilliant evening of fun, with great food, fun people, ridiculous entertainment, and hilarious games. Unfortunately there were a few things that weren’t as great, so let’s get to those.

The green room we were sent to upon arrival was very uncomfortable, both in furniture as well as atmosphere. There were random sofas of the five team colours spread throughout, with a few of them basically set on the floor and way too low to be comfortable. People were standing around in their respective groups they arrived in and we didn’t get to meet our fellow team members as it felt a bit awkward to just go up to people and ask what team they were in. It all felt like a house party we didn’t know anyone at. There could definitely be some improvement here, maybe with making the different colour team sections more obvious and providing enough seating for 5 x 12 people.

The other big thing that became obvious throughout the meal was that portion sizes were incredibly uneven. Some dishes came out literally twice the size of others, which really shouldn’t happen at a big dining experience like this, even portions are pretty important when you feed so many people the same dish. Several people commented on this as it really was quite obvious.

However, it was a ridiculous amount of fun, so I can forgive a few issues here and there! I can definitely recommend TV Dinners, especially if you’ve always wanted to participate in a cheesy daytime game show. Grab a bunch of friends, ideally enough to make up a full 12 person team, and get down to the party, because Everyone’s A Winner At Tv Dinners!