On Sunday evening I returned to one of my favourite venues, The Vaults, to take part in Shotgun Carousel‘s newest production, the Red Palace. I’ve visited a few of their previous productions and loved every single one, so really looked forward to getting to experience this one as well. 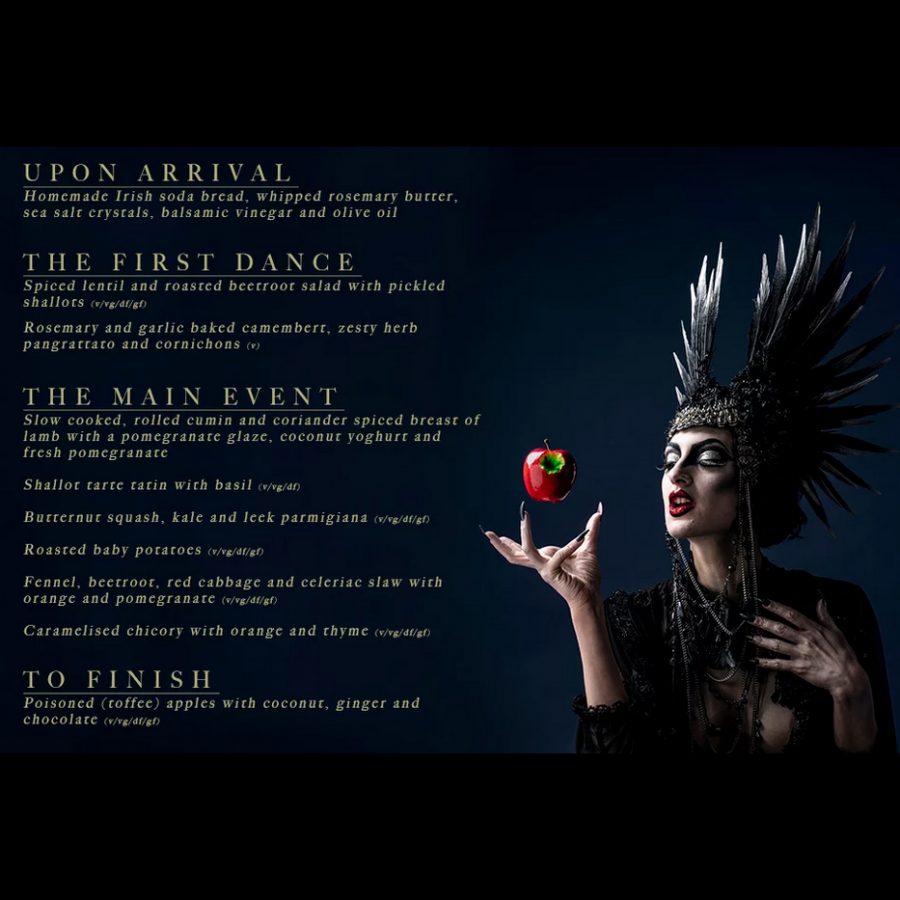 The menu was created and executed by Masterchef semi-finalist Annie McKenzie and featured absolutely delicious items, as listed above. We were welcomed very well by staff who took great care of us, and had a great handle on everything. Timing of the menu items coming out was perfect and there was plenty for everyone to eat. The dinner is served feast-style, so large helpings are placed on the table for everyone to help themselves to whatever and how much they like. 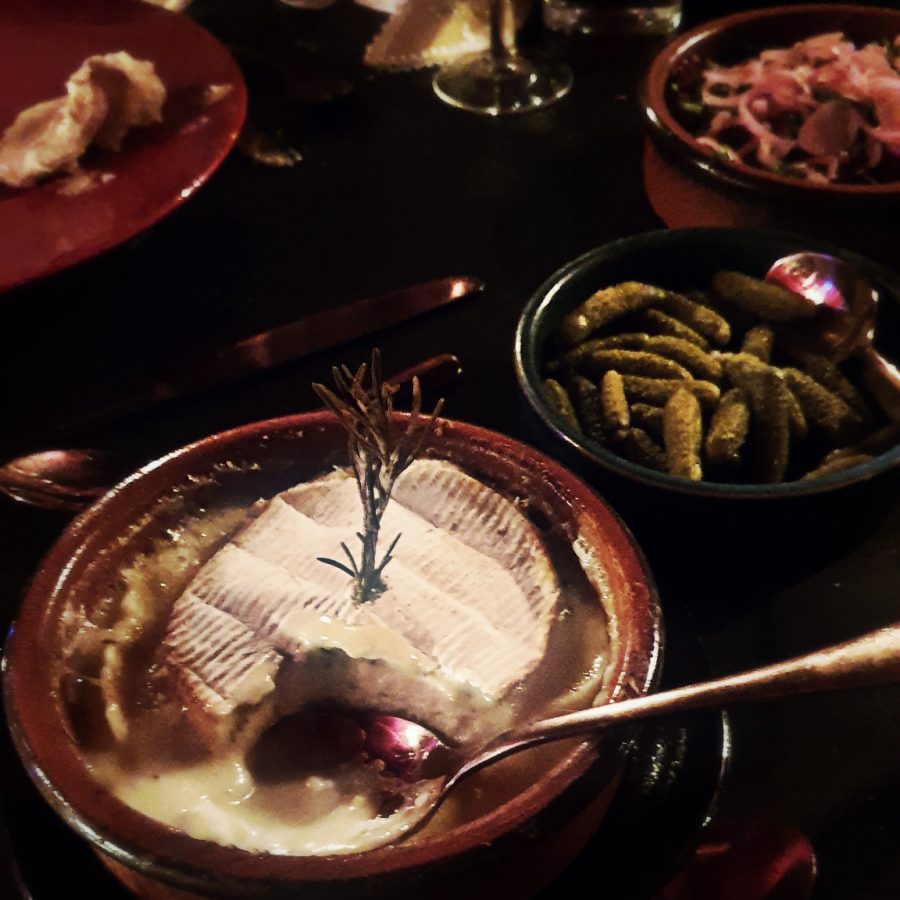 The soda bread starter was a little on the crunchy side, but had a great flavour of sweet honey. Combined with the rosemary butter it was a great flavour. The “first dance” course was definitely my favourite, with baked camembert and the most delicious lentil and beetroot salad I’ve ever had! Fantastic flavours that all complimented each other so well, this meal was definitely thought out really well. 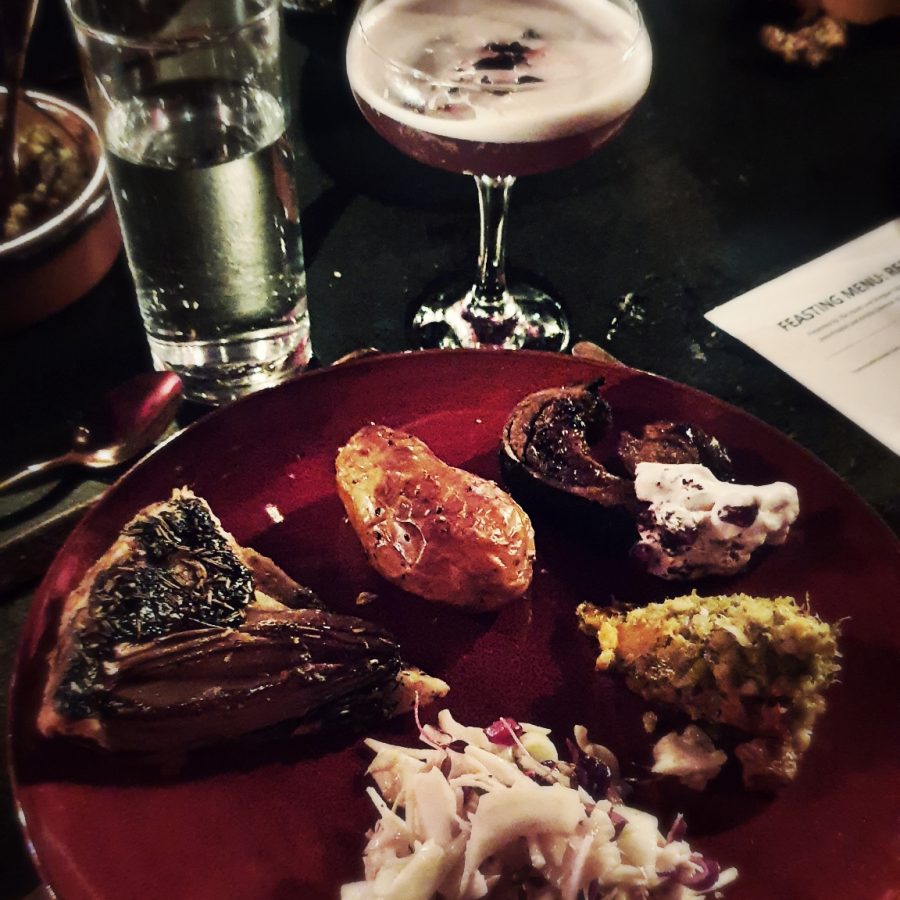 There were also non-alcoholic cocktails on offer! And they went way beyond the usual “mix a few juices together” cheap excuse for a cocktail, but full on crafted mixed drinks! I had the blackberry and apple crumble and it was delicious! Huge props for offering great non-alc drinks! Please keep doing that, it’s too rare!

The main was great as well with lamb, potatoes, shallot tart tatin, slaw and squash. I only had a little of everything as there was just sooooo much food. The tart seemed a little over-baked, but everything else was on point! 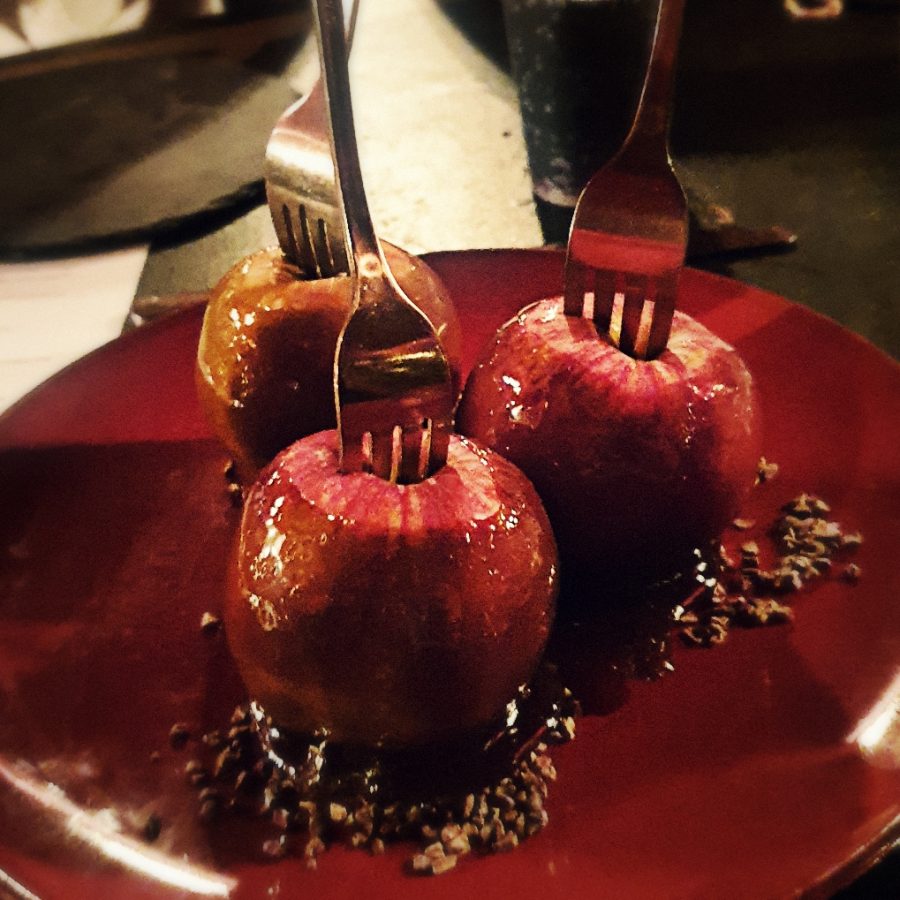 The dessert was of course the crowning glory of the meal, as it should be. A glorious toffee apple served on cocoa nibs, with coconut flakes and popping candy on the side! A refreshing, delicious way to top off a fantastic menu.

During the meal, a few of the characters were already milling around and entertaining us, which gave us a chance to learn a little bit about them. The Prince was tortured by a prophecy, making him a ruthless ruler hated by his subjects, all of whom are fairy tale characters who we get to meet after the meal. 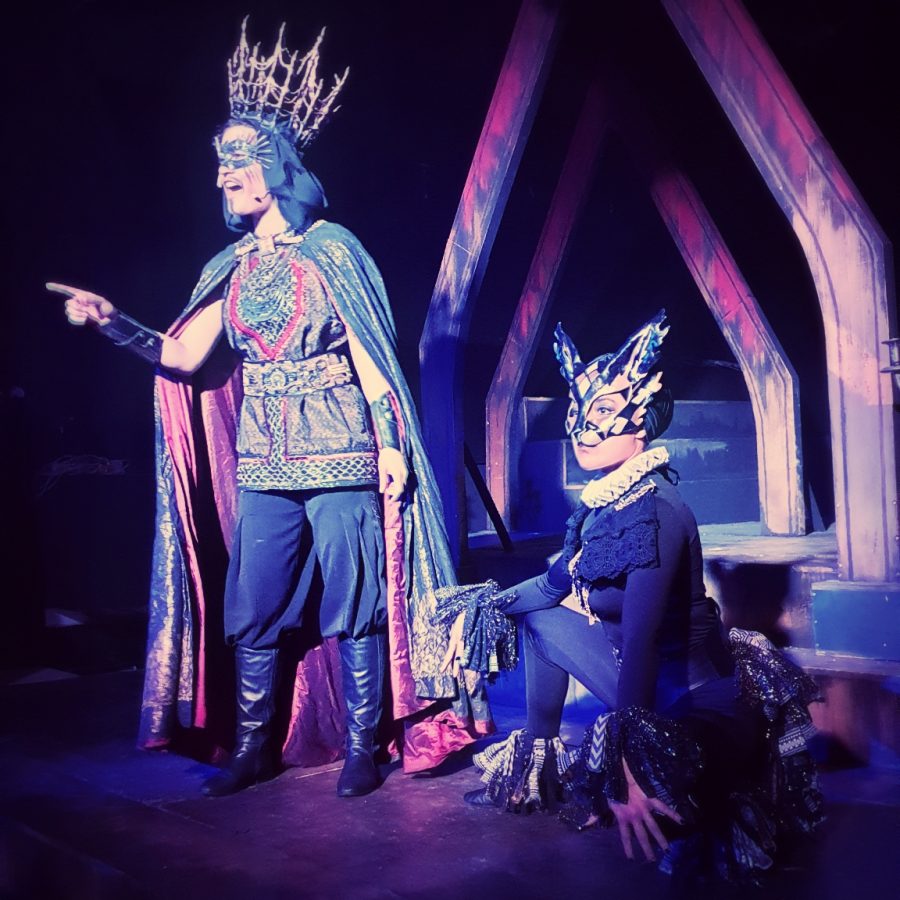 When the actual theatre portion started, we were split off into different groups to explore the different rooms of the palace and learn more about its inhabitants. We followed the cat, but ended up being taken hostage and having to solve a mystery to escape, fleeing to another part of the palace with a message to deliver! From here there were many different rooms to discover and people to meet. A whirlwind of gorgeously designed rooms and beautifully acted fairy tale characters. 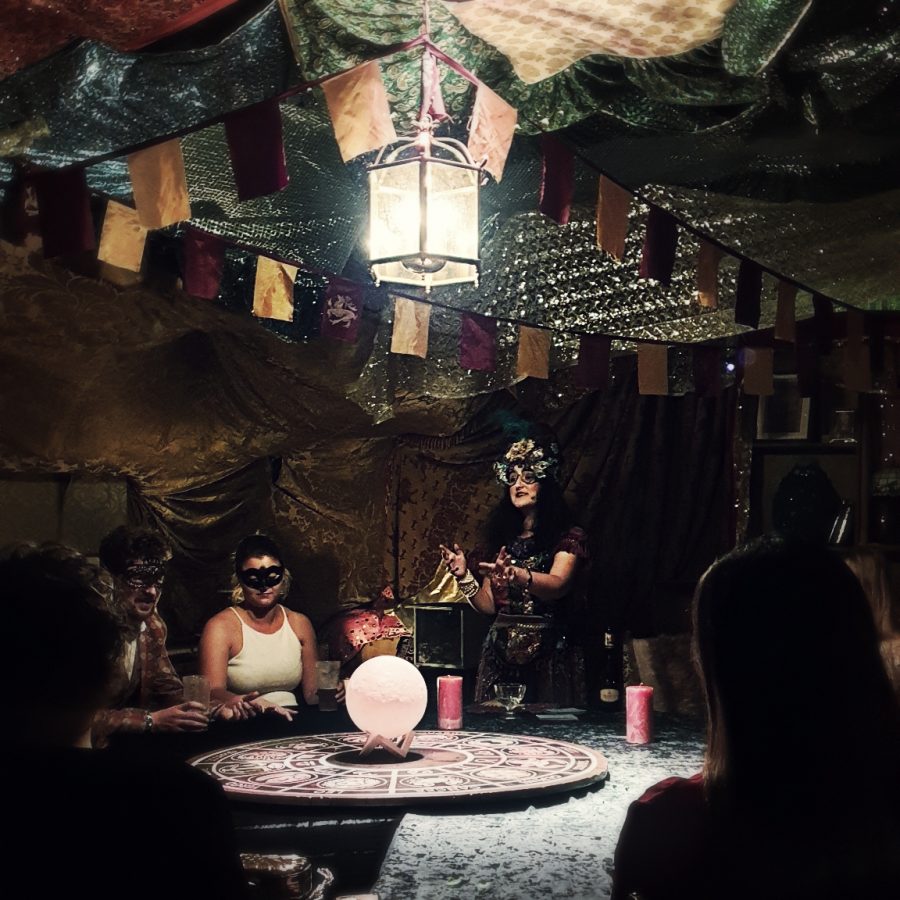 From a seance with Baba Yaga to a strip tease in the Gingerbread House bar, we discovered a magical world of conspiracy and treason. Red Riding Hood is definitely all grown up, and so are Gretel and Snow White. Unfortunately there wasn’t enough time to see everything, as there is just too much to explore! We missed out on at least two different rooms, but hopefully I’ll have a chance to go back and see those rooms at another time, as it was just too much fun. 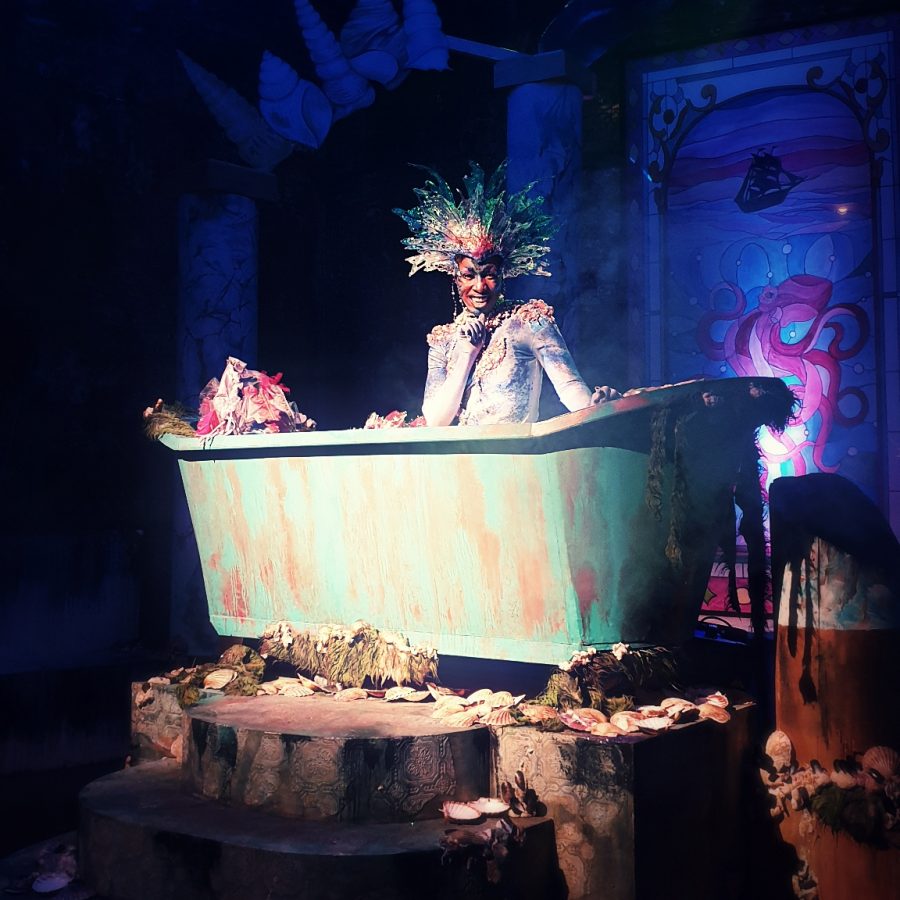 Whether you opt to have the dinner before the show, or just go for the show on its own, you’re guaranteed to have a fantastic time! Throw on your best ballroom finery and interact with a plethora of fairy tale characters, what’s not to love about this. Solid five out of six rainbow sloths from me!