On Friday night, Love Pop Ups London invited me to come along to the Play Dead London and Daggers Productions one-night-only Victorian murder mystery A Deadly Dose. Fittingly held at the Victorian Operating Theatre, which is a gorgeous museum near London Bridge and always worth a visit, we climbed the narrow staircase to help solve a dastardly murder. 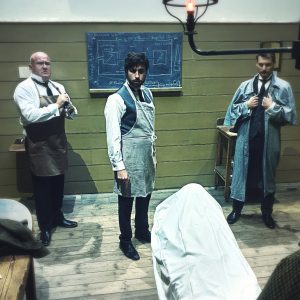 It is 1879, Mr. Jacob John Canning was found dead in a Miss Molly’s house of ill repute, Dr. Thomas Theobald is about to start the post-mortem exam at the old operating theatre when he is interrupted by the police who name him as one of the suspects in the man’s death. As detectives, we are now shown the evidence and given a chance to talk to all six suspects, as well as two witnesses, to try to solve the mystery of what happened to poor Canny.

Was it Lady Susanna Beechworth, the victims sister who had secrets she didn’t want anyone to uncover? Or her husband, Lord Archibald Beechworth, who owed the victim a significant amount of money? The disgraced Dr. Thomas Theobald, whose questionable research methods have compromised his career? The shifty Madame Scarlett Dubois wo dabbles in the esotheric arts as well as in shady dealings? The pious nurse Miss Annie Hughes, whose history is intertwined with that of the victim? Or Miss Molly Cook, who owns the establishment the victim was found in? All the suspects have motives, but it is up to us to speak to all of them to find out what their connection to Mr. Canning were, where they were on the night of the murder, and what their secrets might be.

It’s a great premise, and the venue is perfect for this (though unfortunately not very accessible) and the story is well written, with every suspect having a distinct personality, history, and interesting connection to the victim. It did get a little crowded at times though and as it was a bit of a free-for-all, we weren’t able to ask all the questions we wanted to with other attendees butting in. Though this crowding also meant we got to listen in on other people’s questions and confrontations, helping us gather more clues and draw conclusions. I really enjoyed that none of the characters were confrontational or rude to attendees, which is something I’ve experienced in many other murder mysteries and never liked. The actors seemed invested in their characters, though a bit shaky with their lines at times. But as this was a one-night-only performance, that’s perfectly understandable.

There were also QR codes to find around the museum that yielded pieces of evidence that could be used in questioning suspects. The pieces of evidence were then also presented in printed out form at the pharamcy station, which seemed to make the QR codes a little redundant. I feel it would have made more sense to give everyone the printed out evidence to prepare for our interrogations, as the QR code documents were difficult to read on a screen at times and it did take a little time to find all of them scattered around the place. 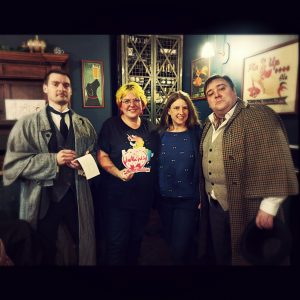 For the finale, we were lead to a pub across the street, where a function room had been prepared for us. We were asked to quickly discuss our conclusions, and then select the one we deem to be the murderer. After a short presentation, the resolution was presented and those who got it right were congratulated on their good work.

We drew the wrong conclusions, and listening in on other teams showed that there was a huge variety of suspects selected, which shows to me that it was a very intriguing and interesting story that pointed at every suspect equally and made this a very interesting game to try to solve.

We certainly had a lot of fun with this murder mystery, and while it does need to be tightened up a little bit, it’s a great murder mystery with a good story and fantastic characters. Will definitely keep an eye on these two companies and their collaborations! Four and a half rainbow sloths from me!