I had the great luck to be given two tickets to see Rosmersholm at short notice, I’d been itching to see Hayley Atwell live and this was the perfect opportunity. 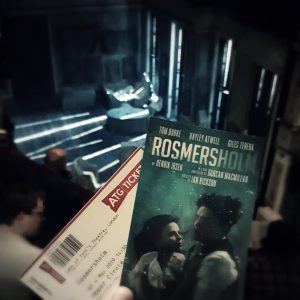 Written in 1886 by Henrik Ibsen, Rosmersholm is set in a small town somewhere in Norway on the brink of a political revolution. The play opens a year after the death of Rosmer’s wife, and bit by bit the circumstances of her death are revealed, along with deeper intrigues and betrayals. Rebecca has lived at Rosmersholm since before Mrs. Rosmer’s death and is an independent, free thinking, modern (for the time) woman with a lot of thoughts she is not afraid to voice. Kroll, Rosmer’s brother in law, hopes to secure Rosmer’s support to stand up against the emerging radical political change on the horizon, and is shocked to find opposition, and a fiery passion for a social change. He blames Rebecca, who has abandoned Christianity and all its moral values and structures.

Passionate speeches, a gorgeous set, and the sheer simplicity of almost understated dress and stage dressing making this a very appealing and enjoyable play. It is intense, tragic, riveting, and highly thought provoking. This play definitely relies on great writing and a fascinating plot more than anything else, a joy to watch! 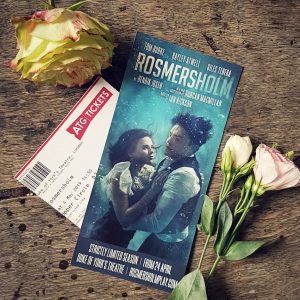 Unfortunately the ending is somewhat ruined by the poster that was chosen for this play, but then again it’s a play that is over a hundred years old and as such surely not spoilable. I can definitely recommend checking this one out while it’s still in the West End. Four and a half out of six rainbow sloths from me.