I love me some fringe shows, so I booked to see a few at the Camden Fringe this year. One of them was Obsolete Tomfoolery at the Etcetera Theatre. 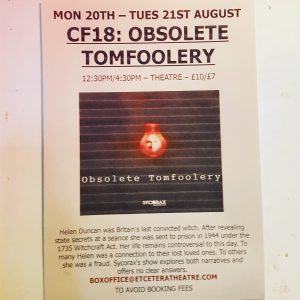 This production focused on Helen Duncan, the last person in Britain to be convicted of witchcraft under the 1735 witchcraft act, and sent to prison in 1944.

I didn’t know anything about the story of Helen Duncan, so was hoping the production would focus on that, which it unfortunately didn’t. It did give quite a bit of information, but I felt like you needed to have a basic understanding of the background history to fully appreciate this production.

It was presented in a cabaret style, which was at times confusing and at times entertaining, but seemed to suit the presented material quite well. I found some of the fillers and lead-ins a little too divorced from the material, though overall it did feel like a cohesive show. 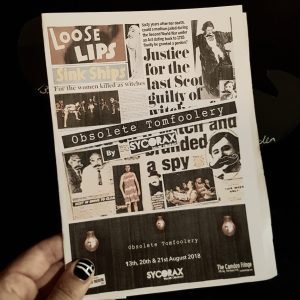 It was an enjoyable shoe, but it did prompt me to read up on the life of Helen Duncan afterwards, as I didn’t feel it provided enough information, so the target audience were definitely people with the right knowledge. Overall it was a fun production with some great songs though, so I’m giving it four out of six rainbow sloths.