I got tickets to see Quiz at the Noel Coward theatre, a play about the real-life case of Charles Ingram, who was accused of cheating his way to winning Who Wants To Be A Millionaire. I didn’t know too much about the actual case, but was very interested in seeing how this would be translated to a stage show. 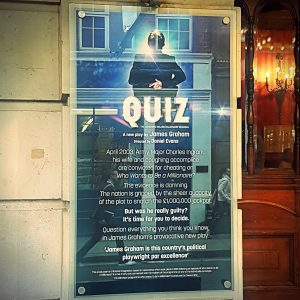 The play jumps from scenes of the characters meeting via pub quizzes, the actual game show, and the court case. It’s not necessarily linear, but skips back and forth a bit. At the end, the audience would have a chance to vote on wether they thought Ingram was guilty or innocent.

It starts a bit slow, with the scenes of pub quizzes and domestic life, as well as Ingram hatching plans on how to win big on the game show. It seemed a bit contrived and boring at first. But once the game show element came in, Quiz definitely picked up a bit. The scene changes were done really well and worked great, making it seem like we were the actual audience of the game show, including an warm-up entertainer and applause queues.

However, the whole court case part just seemed wedged in, especially as it didn’t happen in a linear fashion but rather in small chunks in between other scenes. I felt this really skewed things and made it seem like the accusations were very much made up as they were interspersed with domestic scenes, which heightened the sympathy for the accused. Especially the prosecution was portrayed in an extremely antagonistic manner.

Once it came to voting, the verdict of the audience was, unsurprisingly, innocent. Which felt quite set up and led by the playwrite in the way the procesution and the game show itself were presented. I wish they’d have been a bit more measured and factual in their presentation rather than leading the majority of the audience to a pre-determined verdict.

Overall, it was very well done visually and the atmosphere was definitely great, but the way it was presented didn’t sit too well with me as it seemed quite manipulative. I’m giving Quiz four out of six rainbow sloths.