I was invited to join Love Popups London to test out the brand new escape room The Cabin at Escape London. This exit room company has two locations, one in Shadwell, and one in Shepherds Bush. This new room, set in a spooky cabin and camp site, is located in the Shepherds Bush venue, which is short walk from Shepherds Bush Market station. Here’s my spoiler free review. 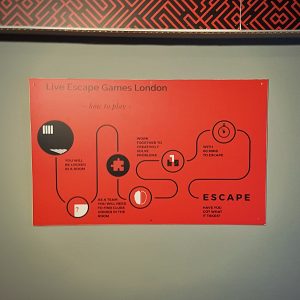 The experience starts innocuous enough, with our full team of seven being gathered inside a large tent in the first room. This one is a very small room, barely holding our team, with very few hints and puzzles to solve. What we do find out though is that the premise is that a hunter has stolen goods from our camp while we were hiking and we had to find his cabin to get them back.

We set off to quickly solve the first puzzles and burst into the second room, which is much roomier and as thus gave the entire team enough space to fan out and find things to do. We quickly set to task and seemed to blast through most hurdles quite quickly, obviously helped by our vast experience shared out amongst the large group.

Every puzzle and game made sense in itself, though some were harder to find and put together in our minds than others. At no point did we feel stuck or artificially held back in any way. The props and decorations are very well done, though some of them could be utilized as clue hiding places more efficiently. For a brand new room that just opened two days before, it was incredibly well put together and very cohesive. 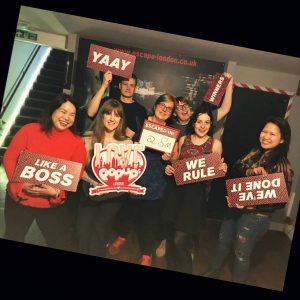 Experienced teams will find many familiar elements, but also a few new and surprising ones that are a lot of fun to work on. Newcomers and very small teams (teams of two or three people) will probably face a steep challenge with this one as there is just so much to do, find, uncover, solve.

We blasted through this room with a new record time of just 28 minutes, but do keep in mind that we are seven experienced escapees, that definitely makes a difference. I enjoyed this room very much and look forward to trying out this company’s other rooms on offer. Five and half out of six rainbow sloths for this one!