I’ve been wanting to see this musical when it first opened, but only now got around to it. A cheesy B-movie about a bizarre superhero turned into a cheesy musical? This is my scene! 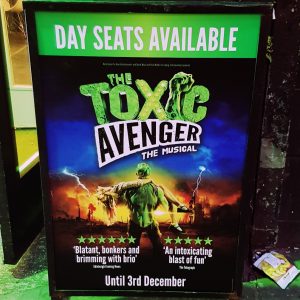 If you haven’t seen the film this one is based on, you can still heartily enjoy the tackiness and cheesy cheerfulness of this hilarious show. It’s full of whacky characters and silly themes and of course absolutely hysterical songs and choreographies.

The plot loosely plays out like this: an evil businessman dumps toxic waste in New Jersey because it’s not New York and who cares! A super nerdy guy finds out about it, threatens to expose the dirty deeds to the mayor, who is of course a comically oversexed villainess profiting from the toxic waste disposal, and gets shoved into the glowing green goo. He emerges as a deformed green monster with superhuman strength, so decides to take on all the evil people trying to destroy New Jersey while also trying to win the heart of the blind librarian he’s crushed on for a while. 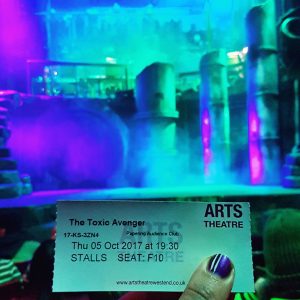 Of course, whacky hijinks ensue and cheesy songs have the audience positively in tears. This musical is a nostalgic riot, if you like B-movies, tacky superheroes and laughing, do yourself the favour and go see The Toxic Avenger!

I’m rating it five and a half out of six rainbow sloths!